my favorite cards of the year - 2010 edition

i recently introduced my mini collection focusing on my favorite cards from each year that i've been a collector. the basic gist is that i wanted to create a space for the cards that i most appreciated having in my collection in the year that they were released. these were cards that i acquired in the year that they were issued, and that i considered to be my favorites at the time. i have disallowed (most) cards that are already in other mini collections in order to avoid having a mini collection consisting of more steve garvey, double plays, and dodger stadium cards.
in 2010, the twins moved in to their new ballpark and were defending central division champs after having missed the playoffs for a couple of years. there was a lot of optimism and buzz around the team and the stadium. similarly, the dodgers were coming off of back-to-back nlcs visits for the first time since 1977 and 1978. i was all in on both teams, and i think my favorite cards from those years reflects that.
favorite non-dodger card: upper deck biography alexi casilla 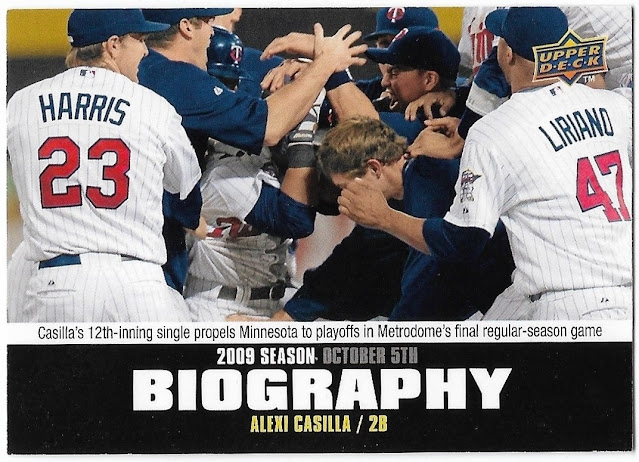 after being disappointed with upper deck's 2008 documentary release, i was pleasantly surprised with their biography inserts in their final baseball release. it was certainly less ambitious than documentary, but ultimately more successful. it was more of a highlights insert set along the lines of the topps year in review inserts from 2008 (which was a sort of pre-cursor to "topps now").
anyway, game 163 of the 2009 season was a big deal here in the twin cities. the twins had tied the tigers for the american central division lead with a couple of games to go in the season, and they wound up remaining tied through 162 games. game 163 had the potential to be the final baseball game in the metrodome, but the twins made sure that wasn't the case. despite giving up a run in the top of the 10th, they tied the score in the bottom of the inning and then won the game in the bottom of the 12th on a base hit by alexi casilla. given the fact that the game was won by non-star players and the twins went on to get swept in the playoffs (as is their wont to do), i was both surprised and excited to find this card in a pack the following year.
favorite dodger card: upper deck biography orlando hudson 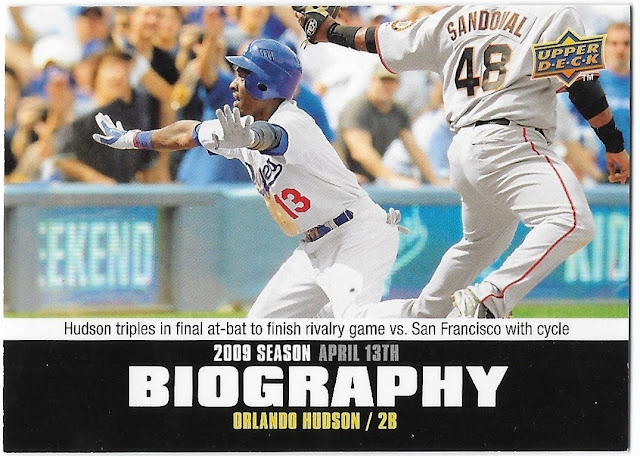 same set! prior to orlando hudson completing the cycle at the dodgers' home opener in 2009, no dodger had ever completed the feat in my lifetime. the last dodger to do it before hudson was wes parker during the 1970 season, and parker was the only los angeles dodger to complete the feat as well. i was watching the game and was pretty excited when hudson doubled to make it three-fourths of the way to the cycle in the bottom of the fourth inning. all three of those hits came against randy johnson, too. hudson tripled in the sixth against a reliever to complete the feat and another thing that i had never seen came to pass. i was excited to find this card in a pack a year later, even though the text is wrong and hudson got a fifth (his final) at bat in which he struck out.
i guess what you are learning is that i like cards that i can tie to specific games or events.
next up, 1984 - stay tuned!
Posted by gcrl at 7:55 PM