some year end garvey gets

i was busy looking for steve garvey cards to add to my collection in 2016, and i found quite a few.  here are some that recently arrived. 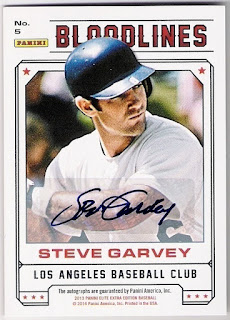 this one was on comc with a reasonable price that i put an offer on to make even more reasonable.  it features garvey and his son ryan, who was in the rockie organization at the time, on the other side of the card.  sticker autos for both!

here are a couple of cards that i found on the beckett marketplace just a couple of weeks ago. they are from 2005 playoff absolute memorabilia, and are the padres' team quad cards from the set 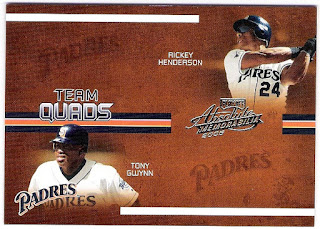 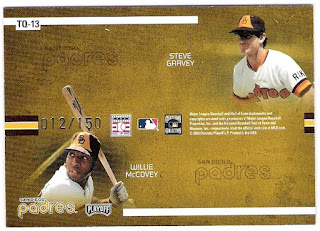 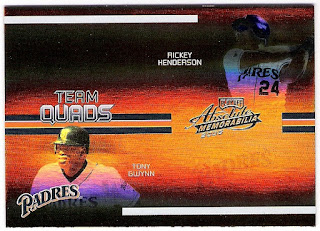 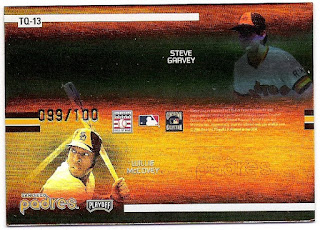 i have three of the different game used versions of this card, but never picked up the base.  in fact, i hadn't seen either of these cards for years. 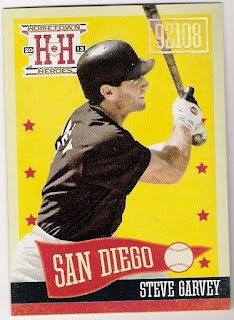 i had the state version already, but not this one.  i would have preferred garvey to have been featured under the 90012 zip code.

that's enough padres stuff - here's a dodger card (sort of) of the garv that was undervalued on comc in my opinion.  it's a 2015 topps original 1975 topps nlcs card 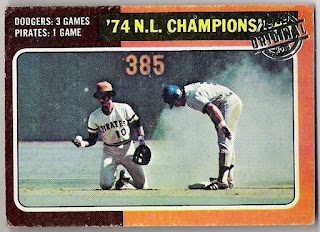 comc did not identify this as a garvey card, and the seller had a pretty low price on it.  i was very happy to stumble upon it.

you'll notice that none of these are from 2016, but don't worry - i've picked up quite a few garvey cards from this year's releases.  i'll be showing many of them, including my favorite, in a future post.

happy new year!
Posted by gcrl at 9:55 PM No comments:

the few times that i've participated in secret santa gift exchanges (in an office or familial setting), the identity of the secret santa was revealed at the time gifts were exchanged.  i joined bob walk the plank's secret santa this year, and sent out cards to my assigned collector with no pretense of remaining anonymous once he received the cards.  i can't tell whether he recognized my package as a secret santa gift or not - i'm pretty sure it was clear on the packaging - as he's posted part of the group of cards i sent.  i'll wait and see if he mentions it in a future post.

in the meantime, i received my gift - this 2013 topps johnny podres chasing history autographed insert 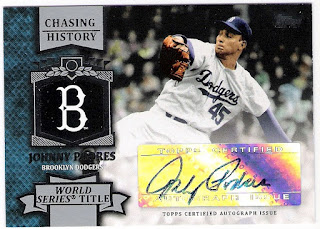 however, i do not know who sent it. i didn't recognize the address, and there was no note inside.  maybe it's better this way, but if you want to 'fess up, please do so in the comments.

it's weird seeing johnny podres autographed cards show up in card releases these past few years since he passed away almost 8 years ago.  that's stickers for you.

anyway, i had fun looking for cards for my assigned collector, and hope that the secret santa project returns in 2017.
Posted by gcrl at 7:55 PM 4 comments:

i didn't 'trade him anything' this year as i have done in the past, but i did take advantage of thorzul breaking up a 1991 classic iii set to snag a dodger team set.  i sent off a sase (with a lone brewer just because it was here on my desk), and soon thereafter received the five dodger cards i had requested.  the team set consists of juan samuel 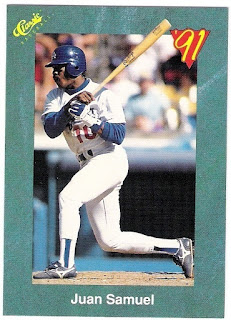 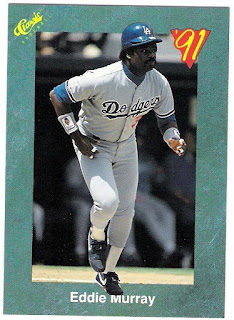 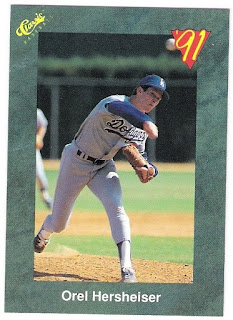 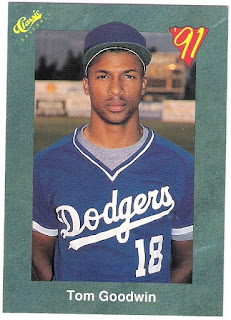 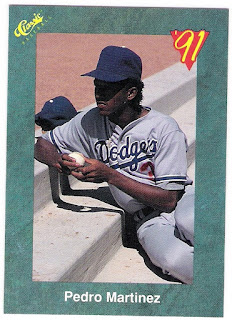 classic had to remove the 'b' from the hats of goodwin and pedro who spent time with the bakersfield dodgers in the high-a league.  i suppose their hats also could have had the interlocking 'gf' of the great falls dodgers of the rookie league, as well.  no matter, these are dodger cards regardless of what is or what is not on their hats.

the best thing about these cards, other than having an instant dodger team set added to my collection, are seeing the personalized wristbands/forearm bands that eddie murray is wearing.  seeing them reminds me of those baseball patches from the late 1970's 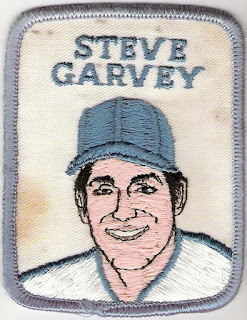 imagine if steve garvey had run around wearing that on his forearm.  although, he did wear the mcdonald's logo on his wristbands at some point, so maybe a self-portrait wouldn't be so bad.

thanks thorzul.  maybe i'll trade you anything next year...
Posted by gcrl at 7:55 PM No comments:

i guessed mota and got mota, even though 11 is not divisible by the number 5

matthew from the number 5 type collection (and fellow steve garvey collector) held a contest during the world series, asking folks to guess the total number of runs scored in games 4 and 5.  i guessed 11 (or as i put it "mota"), and came in third.  matthew was kind enough to send cards to all who participated, and one of the cards i received was this nice 1978 topps manny mota card 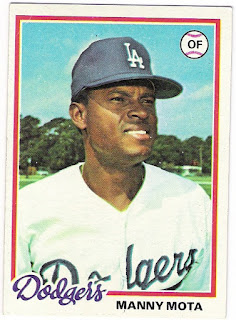 manny, of course, wore number 11 for the dodgers for over 40 years.  josh reddick wore it for a couple of months last season.  doesn't seem quite right. 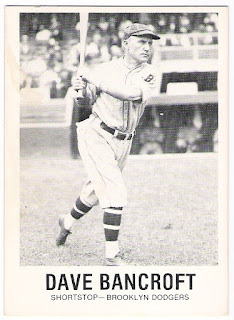 bancroft spent two years with the robins in the late 1930's following several seasons with the phillies,  giants, and braves.  he somehow was voted into the hall of fame by the veteran's committee in 1971.

matthew also threw in some 1971 o-pee-chee!  all that matters with those cards are the backs, so here are claude osteen and joe moeller 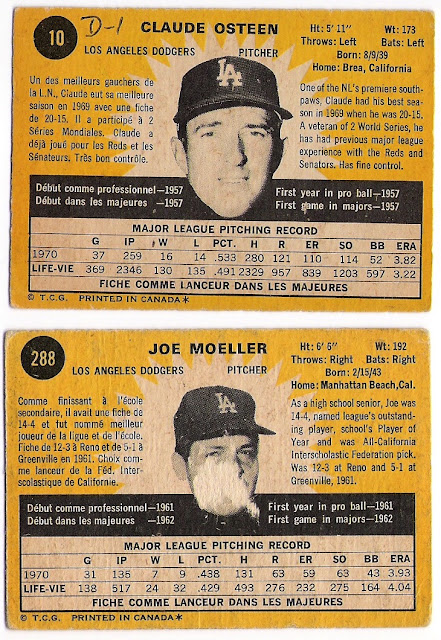 some writing on claude's card and some paper loss on moeller's, but that's ok with those bright yellow backs.

i have not kept up with trade posts since retiring the garvey cey russell lopes site a year and a half ago. since then, i've continued to trade and figured now that i've started this outlet, i should share some of the cards i've received.

here are some that came my way from jeff at 2x3 heroes.  he's been one of my most steady trade partners, and i have another team bag chock full of white sox, miscuts, and other stuff he collects ready to go. 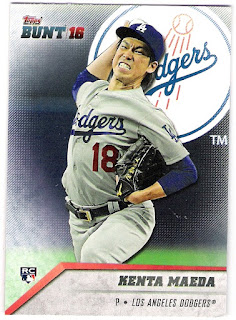 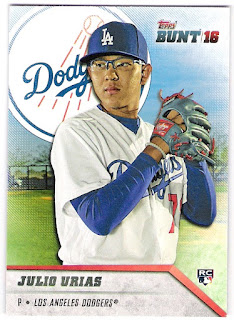 and a 2015 topps update relic card of their catcher, yasmani grandal 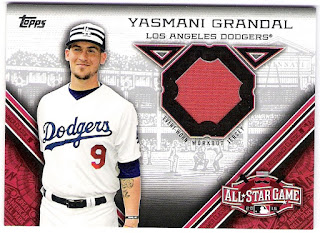 the dodgers have kept their battery intact going into 2017 by resigning kenley jansen and rich hill.  they seem ok with grandal's inconsistent offense because he is a plus defender behind the plate.  i guess the dodgers used to win with steve yeager, so why not grandal.

jeff recently held his annual year end clearance card lot claim, so i should be getting more 2x3 heroes soon...

thanks jeff!
Posted by gcrl at 7:55 PM No comments:

still accepting autographs through the mail (and even unsigned returns, too)

it's been a while since i've sent out a autograph request through the mail - five months, to be exact - and even then it was just four requests. i am certainly not sending them out at the clip i was back in 2009 or 2010, that's for sure.  of the four that i sent out this past july, i've received two back. those would be andruw jones and a guy i'll show a little further down in the post.  i have, however, received  in the past few months some returns for which requests were sent well before july of 2016.

here is my latest return, and i'm calling it a qualified success.  that's because even though clayton kershaw did not sign the 2015 topps card that i mailed his way on february 15, 2015, earlier today i found that unsigned card and this card in my return envelope 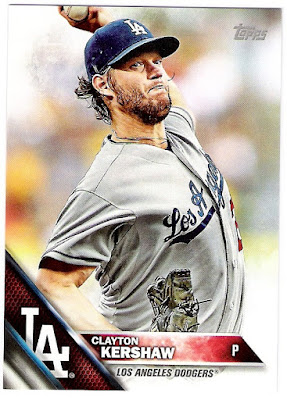 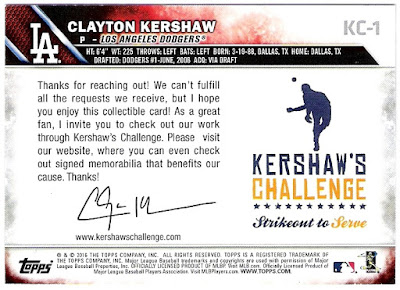 it's a special card topps made for kershaw to highlight his kershaw's challenge charity.  go ahead and check out the website. i'll wait.  i have some kershaw ttm returns already in the collection, plus a few certified autos (including the one i pulled recently, which is not as some may suspect my favorite card of the year - stay tuned for that p-town tom inspired post), so i am actually pretty happy with having received this card instead of the one i sent.  the front is slightly embossed, too.  it's a fantastic oddball item, even if it's the same photo as his topps flagship card. 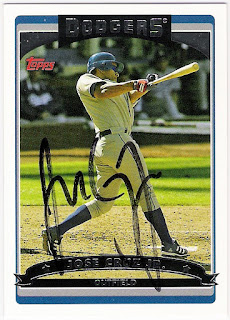 it made its way back to me earlier this month, which is fairly quick compared to some other returns i've got back this calendar year.  for example, i received a 1978 topps card signed by steve swisher this past april. it was a card that i mailed to him in august of 2011 - 4 years and 8 months earlier!  brandon league signed and returned a 2013 topps card 3 years and 7 months after i first mailed it, and grady little returned a 2006 upper deck and 2007 topps card signed in february - almost two years after they were mailed to him.  bill north took 2 years and 8 months to return his 1979 topps card unsigned with a note telling me how to arrange for an autograph through a website, so it's safe to say that alfredo griffin came through with a quick turnaround on my request for him to sign his 1988 topps traded card 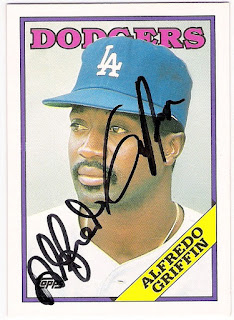 it came back to me in september, almost exactly one year after i mailed it out.

and then there is this pete mackanin 1978 topps card 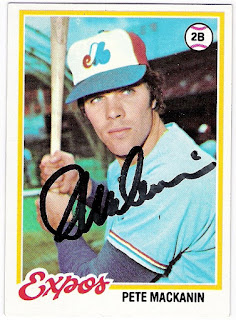