i am sure that it is not fun in the moment, but in the grand scheme of things, i think giving up a historic hit wouldn't be the worst thing in the world. for al downing, it means that you get to show up on new baseball cards from time to time.  case in point, this 2019 topps online 150 years of baseball card commemorating hank aaron's record breaking 715th career home run. 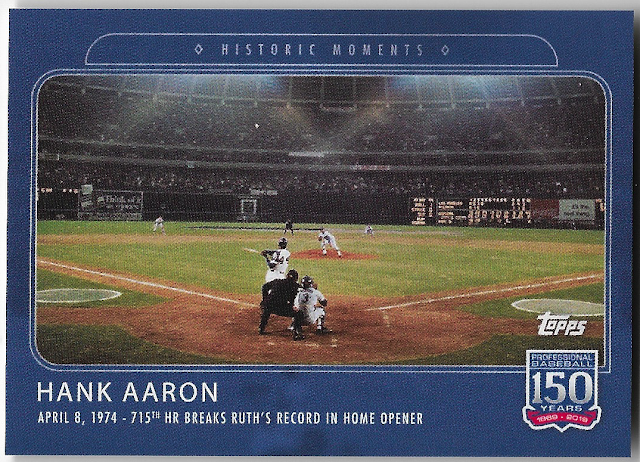 there's downing on the mound, with joe ferguson behind the plate. bill russell and davey lopes are there in the background, too, but steve garvey and ron cey are just outside of the image, unfortunately.  the dodgers also happen to be wearing black armbands in honor of ken mcmullen's wife who had recently passed away, but this card goes in my lurker collection as there is a different version of this card in the memorials collection.

i met downing once when i was a kid. it was at a benefit thing, and he was really nice to me. i knew that he had served up this historic home run, but i was more impressed that he had worn the dodger uniform. i didn't ask him about how he feels about being remembered primarily for allowing a historic home run, so i don't really know if it bothers him or not.

i am guessing that pete rose won't be part of this set, so there is little chance of a card with eric show sitting on the mound after surrendering hit number 4192, or, for that matter, of pete and steve garvey at first base in the aftermath.  speaking of which, it's pretty cool that the garv was on the field for 715 and 4192, as well as nolan ryan's record breaking 5th career no-hitter.  and, since he wasn't the pitcher, maybe the memories aren't quite as bittersweet.
Posted by gcrl at 7:55 PM 3 comments:

i settled in to watch the dodgers take on the reds on april 15, 2019 which was jackie robinson day. i knew that there would likely be a generic "players wear 42" card issued by topps the following day, and i knew that i would likely ignore that card as i had done the past couple of years.  not too far in to the game, i knew that there would be another topps now card offered on april 16th as yasiel puig took clayton kershaw deep in the top of the 1st inning in his first at bat at dodger stadium as a visiting player.  it's just the type of backstoried event that fuels a large part of the topps now engine.

sure enough, topps posted the following image on their website the next day. 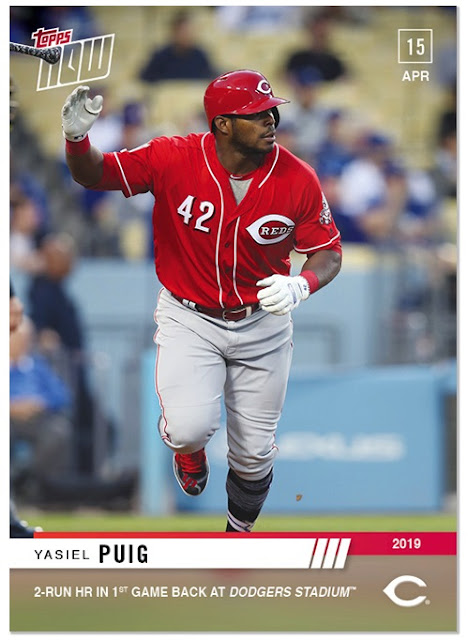 except they referred to dodger stadium as "dodgers stadium".  that's poor copy.  still, the puig fit in to my '42' collection, as well as my dodger (not dodgers) stadium collection, so i bought 2 of the card from a secondary seller.

you may recall that the very first year topps now was issued, there was a lawsuit filed by a guy who had bought a card because the prototype version on the website showed an error of some sort, but the card he received did not, as the error was corrected prior to printing. in this case, i was very pleased to see that the text had been corrected on the printed version of the card: 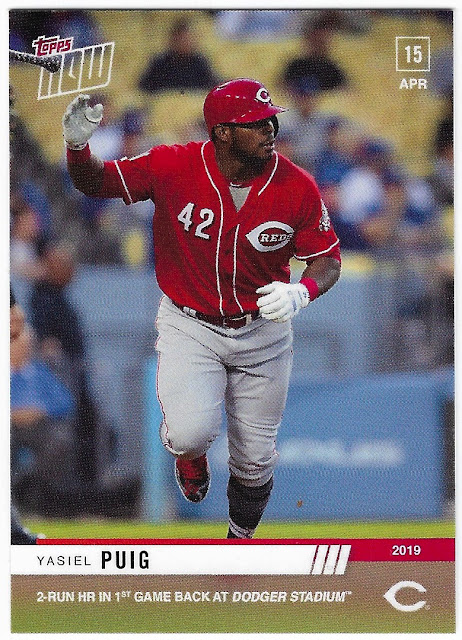 so, one card for my dodger stadium collection, and one card for my 42 collection. i will admit that i considered at one point a few years ago of starting a 'bat flip' collection (i wound up not going that route), and this card would have fit nicely into that one as well.

there was another moment from that game worthy of a topps now card thanks to joc pederson's heroics in the bottom of the 9th: 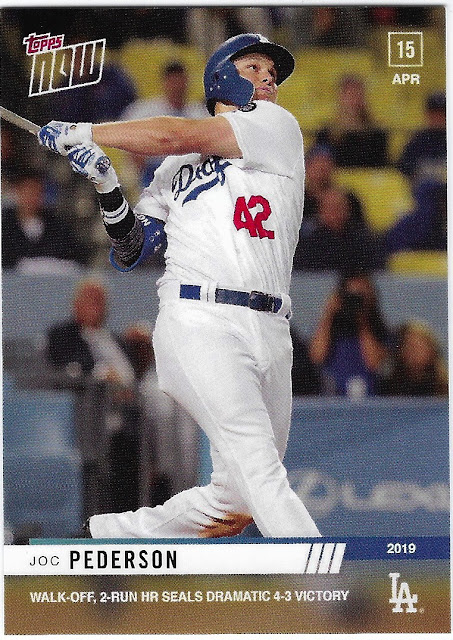 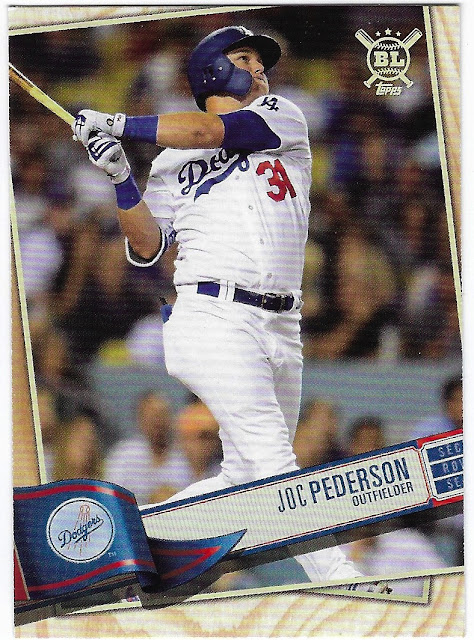 i mentioned in my last post that there are a few really nice cards that feature dodger stadium in this release, but this is not one of them.  still, in to the collection it goes.  i also found a card for my double play collection in one of the packs i opened 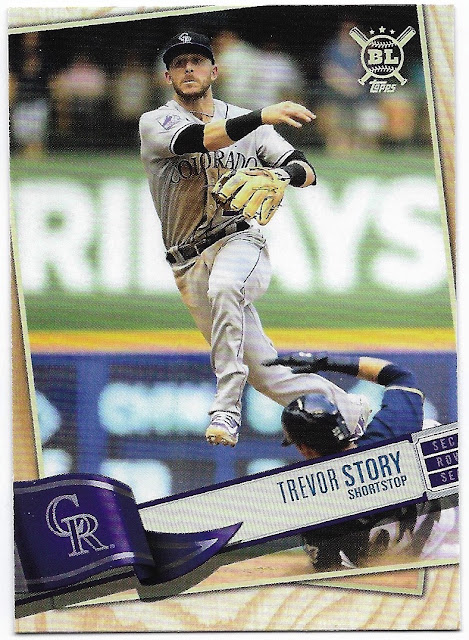 it only took me 30 years to find the greatest card of the 1989 donruss set, and here it is: 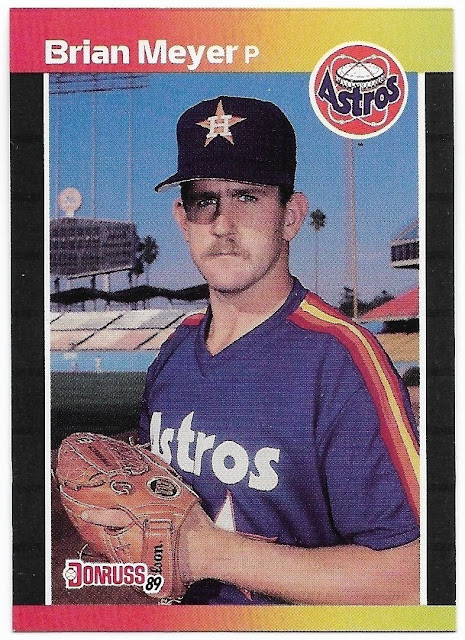 i found this card in a repack a couple of weeks ago, and it was worth sludging through the 1988 fleer and pack of 1988 topps big cards to get to.

meyer visited chavez ravine in september of 1988, but didn't pitch there until two years later.  he did well, although he gave up a home run to eddie murray (no shame in that) in his 2-plus innings of work.

as for the card, it's like bo said in a comment on my post from 9 years ago celebrating the 1987 mother's astros set that featured many photos with dodger stadium in the background, the color scheme of dodger stadium (back then) looks like an astros jersey.  it's such a great card - the donruss border actually enhances the look of it. 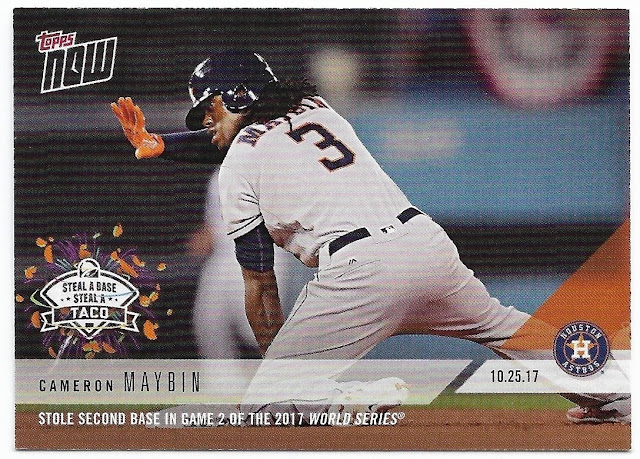 cameron maybin swiped a base in the 2017 world series to earn this card and provide many americans with a free bout of indigestion.  thanks to nick at dime boxes for making me aware of the card's existence!

for what it's worth, i opened some packs of 2019 topps big league tonight and there are some really nice cards in that release featuring dodger stadium, too. no astros, though.

a portrait of a young man, signed

i can recall the first time i saw mike paxton's card in a pack of 1978 topps. 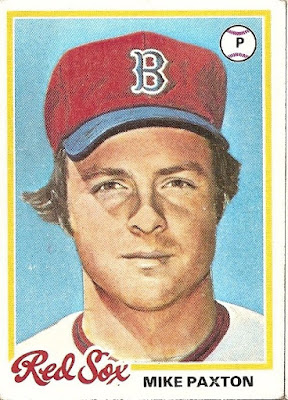 i had already seen greg minton's classic card (as well as dave kingman's), so it wasn't so much the painting aspect of the card that struck me while opening wax with my neighborhood friends and co-collectors; rather, it was his hat.  his red sox hat had a crooked brim, and the top part looked puffy and almost crowned.  why would an artist paint a baseball hat that way, i wondered.

a few years ago, i found the photo that had inspired the card image on a website dedicated to the 1977 pawtucket red sox

earlier this year, i saw that some people had reported a ttm success with mr. paxton, and i figured i would give it a try.  three months to the day later, i received this card in my mailbox: 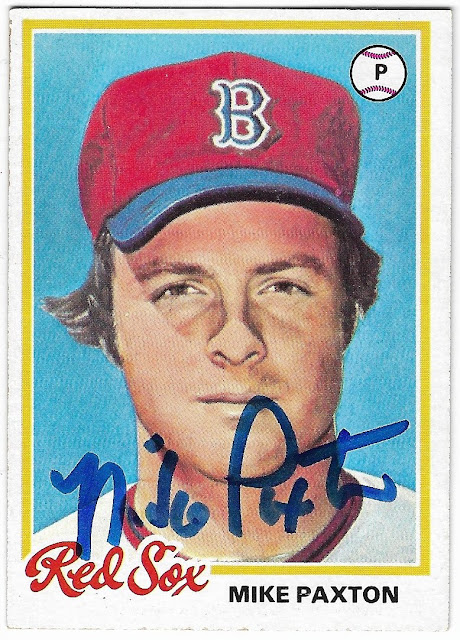 really great stuff.  and, as i have dave kingman's card already signed (as seen in the post i linked to above), i'm hoping to add greg minton to the list of signed 1978 portraits in my collection.

thanks for signing my card mike!
Posted by gcrl at 7:55 PM 2 comments:

sure it's mainly an excuse here in the states for people to go to kitschy mexican restaurants and overdrink.  whatever.  here's a 5/5 card of matt kemp. 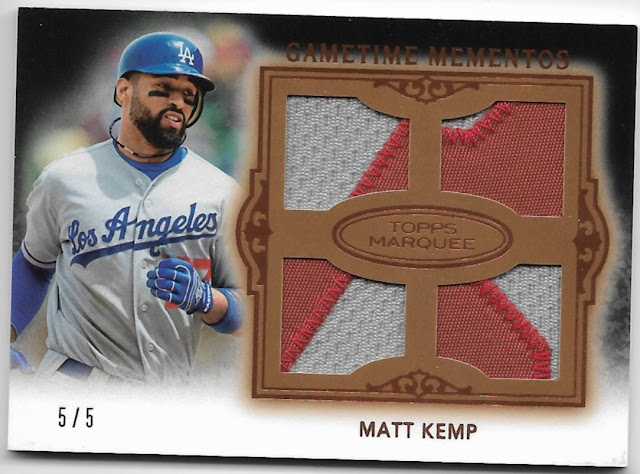 enjoy the red patches, even without any green or white to go along with it.

as an aside, i was able to attend a game in cincinnati last month, and i bore witness to kemp's first home run as a red.  he almost went deep twice, but just missed a second homer by a few feet.  old friend kyle farmer also homered, but yasiel puig was suspended so i missed out on any wild horse dingers.