you know i love me some dodger blue, but i think that the red number patch on the front of the jerseys is what really makes the dodger unis stand out.  as such, i am always on the lookout for cards featuring some red patch goodness. 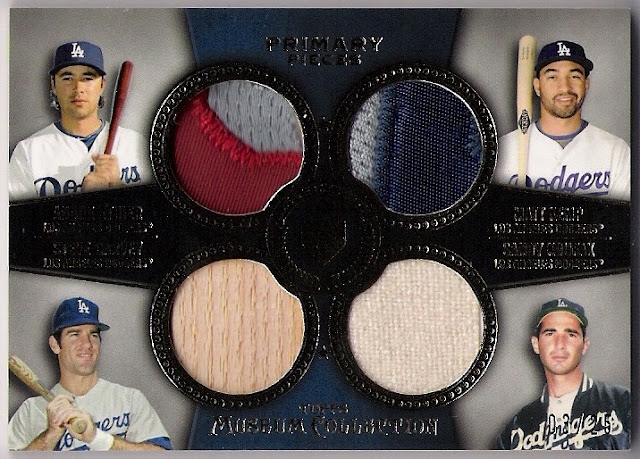 while matt kemp, steve garvey, and sandy koufax bring relics of their own. this is one of the rare steve garvey relic cards that is in my dodger collection. i already had one of the gold parallel versions (#/25) in my garvey collection, but red patch! so i bought another one. 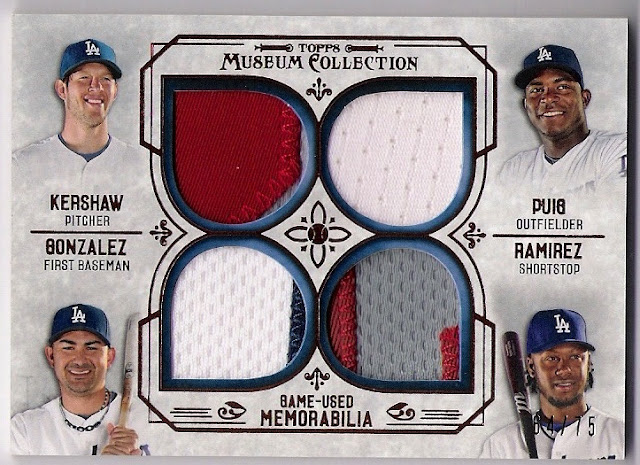 adrian gonzalez has a bit of blue patch, and yasiel puig has just plain white jersey going on. 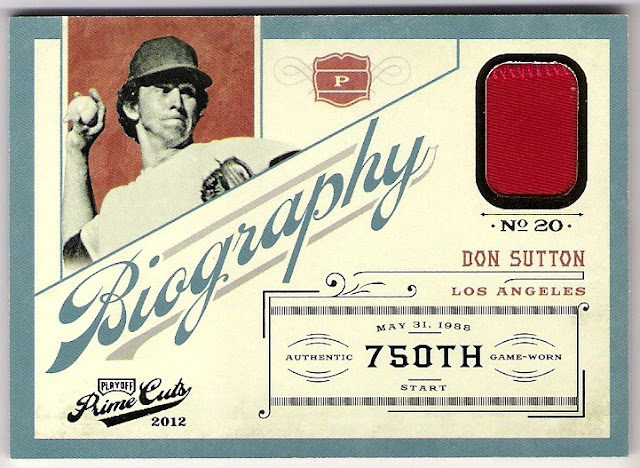 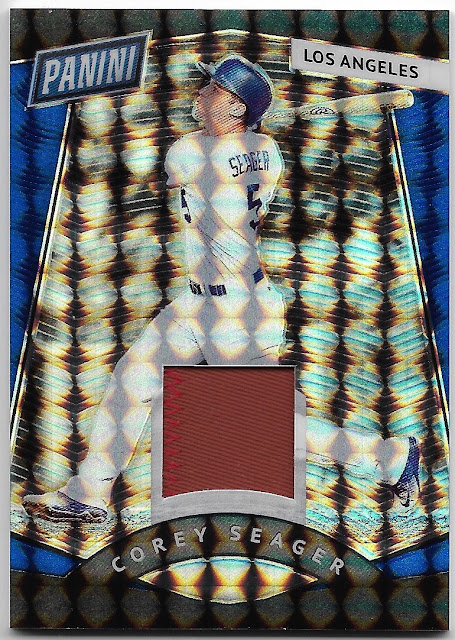 this card is an example of panini trying to alter history by coloring the number on the front of dodger jerseys blue. they are not blue, but rather a glorious red (except on days when they are pink or baby blue or army green or whatever other color mlb dictates in order to sell more stuff).

rickey henderson wasn't a dodger  for long, but he did wear the uniform long enough for some relic cards to be made 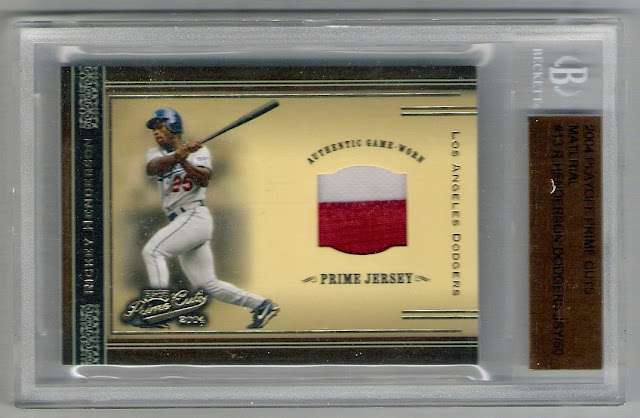 that's a piece of his number 25 (24 was retired by the dodgers for walt alston) on a 2004 playoff prime cuts material card. 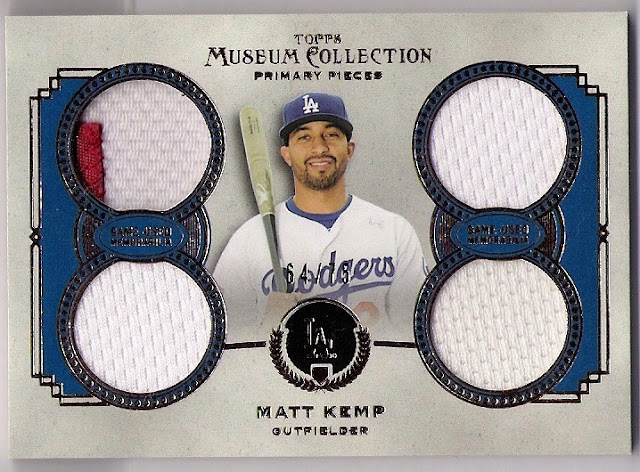 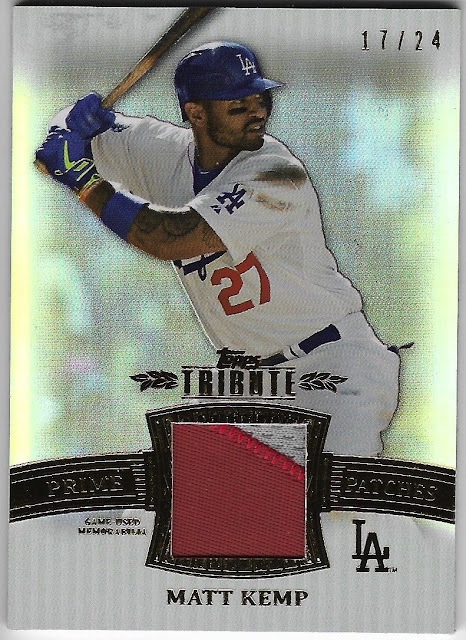 how about some number 22 from the jersey fronts? ok, here's a 2017 panini national treasures clayton kershaw card 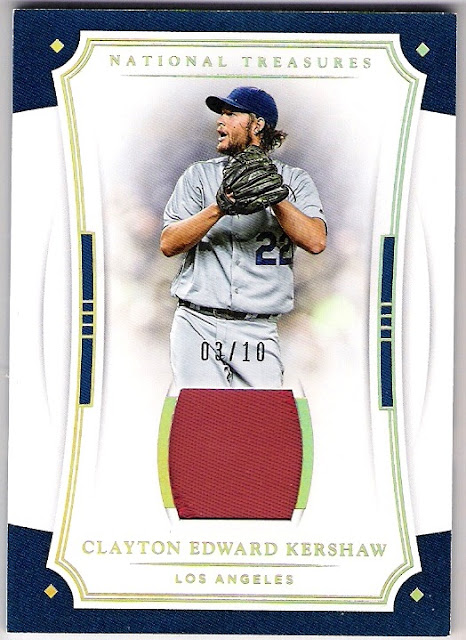 so formal with the full name, but again with the false blue number in the image.

another kershaw - this one from 2017 panini donruss 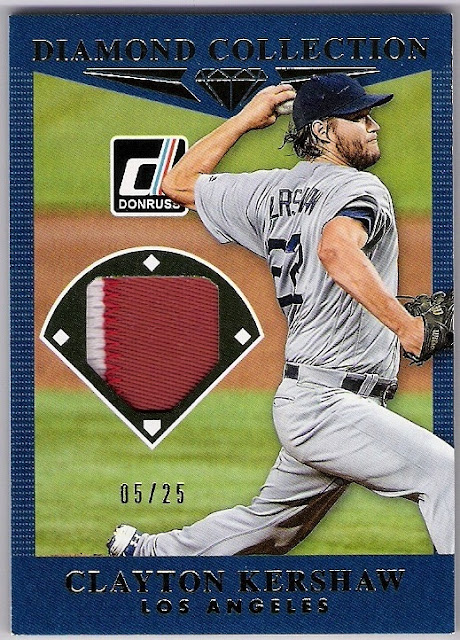 and another from 2017 topps tribute 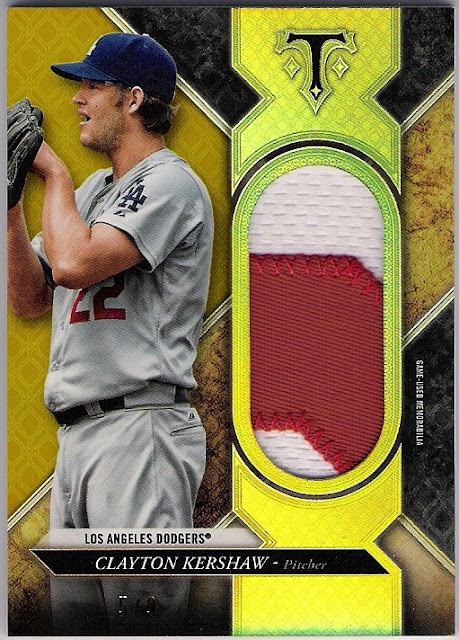 the red patches are usually on the low-numbered parallels as those kershaw cards demonstrate. 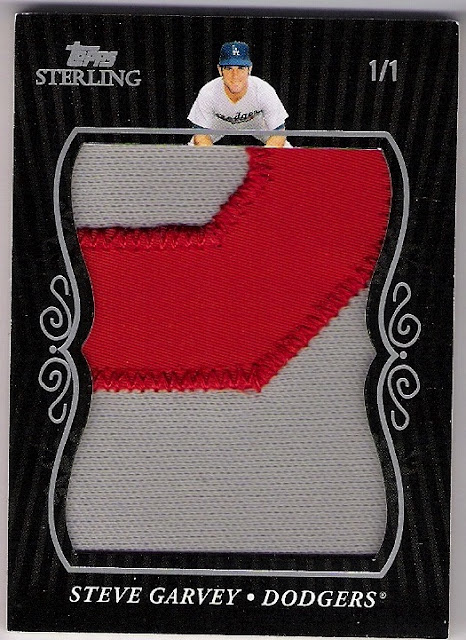 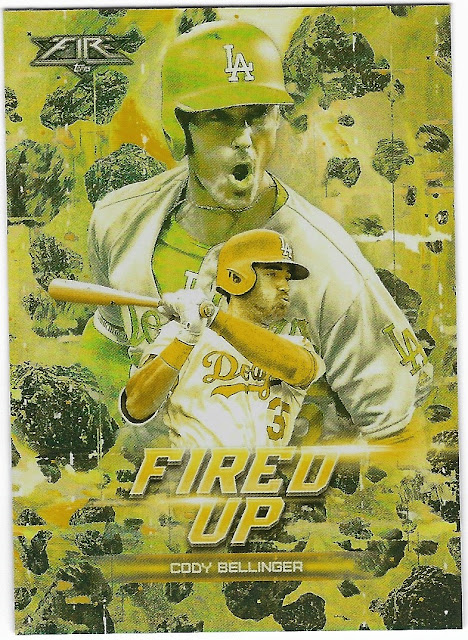 i'm still a realistic optimist, though.
Posted by gcrl at 7:55 PM 1 comment:

what's black and white and branca all over?

with the dodgers playing a western division tiebreaker on the first of the month, there was some attention given to their previous tiebreaker appearances. when that happens, one cannot help but think of ralph branca.

i recently picked up my first 1953 bowman black & white dodger card, and it was ralph branca's card 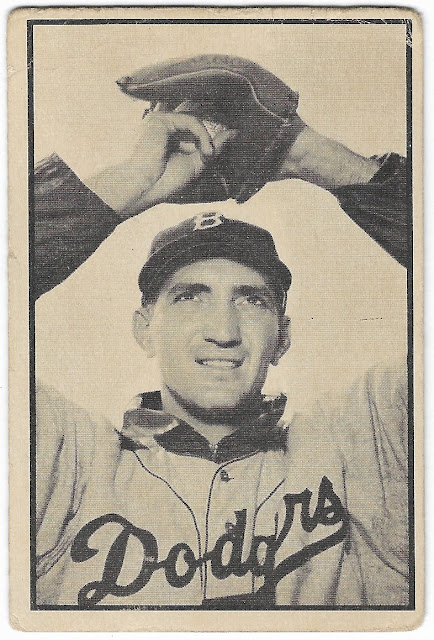 only two more (preacher roe and billy cox) for the full team set!

note that this streamlined and very short post took about five minutes to scan, crop, and edit.  five minutes is really not a lot of time!
Posted by gcrl at 7:55 PM 4 comments:

i was pleasantly surprised to stumble upon one of the recent topps on demand releases a couple of weeks ago.  these are the sets that are offered for sale online only 'while supplies last'. they are different in that regard from topps now sets, and even topps throwback thursday sets, as i understand it.  this particular set is called "inspired by '78", and features a modified 1978 topps design.

i didn't know about this in time to order a set from topps, so i went to ebay and picked up the two dodgers in the base set - clayton kershaw 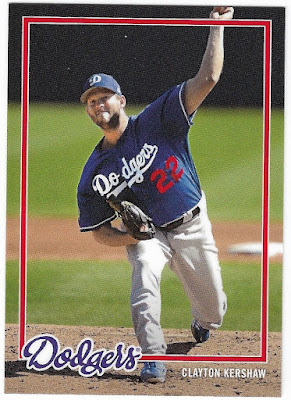 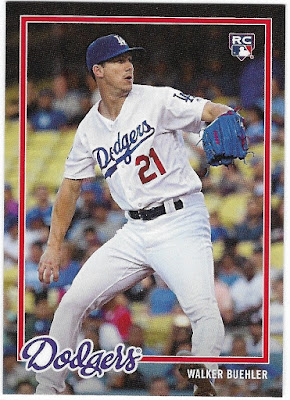 you can see that the big difference here is the full bleed photo.  other modifications include the elimination of the position ball and the smaller type for the player names.  the full bleed effect on the borders makes me think of natgeo. 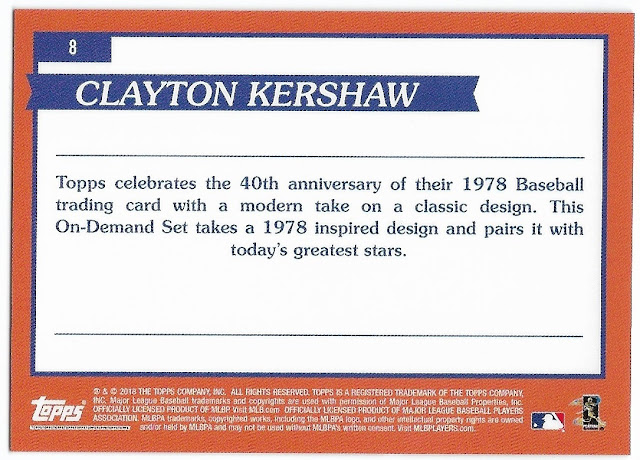 the text here seems disingenuous.  if the 1978 topps is such a classic design in topps' eyes, why has it been so sparingly used in fan favorite and archives sets? if the 40th anniversary is worth celebrating, why has the 35th anniversary of 1983 topps dominated the flagship sets?

while the '78 design has been largely absent this decade, it wasn't always this way.  one of the most famous basketball cards used the same design. yes, i'm talking about the 1980 topps larry bird/dr. j/magic johnson card 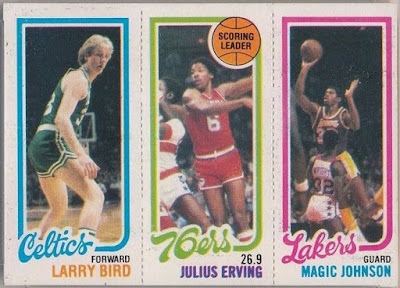 in 1981, topps used the team name font on their squirt issue 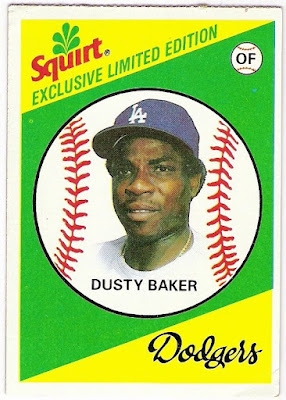 and on the backs of their super home team cards 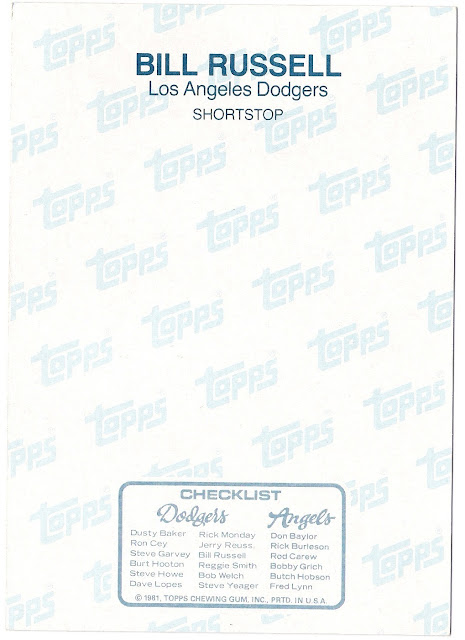 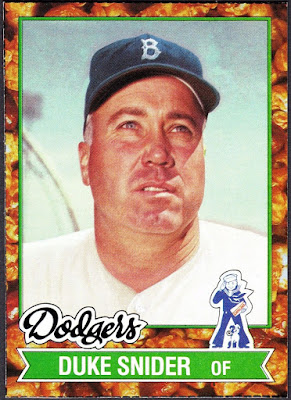 topps later resurrected the design for some of the early 2000's fan favorite sets. i think the most recent occurrence of the design being used was the reimagining of eddie murray's rookie card as a future stars that never were in 2014, which i featured in a post related to my quest for a 1978 topps master set.

i wound up purchasing a "full" 35-card issue on ebay.  this includes the complete 30-card base set, plus two numbered parallel cards, one 4-in-1 rookie card, one "then and now" card, and one "tfamous flashback" card.  those last three cards are from "insert" sets of varying sizes, so it would take quite a few set purchases to put together a truly full set.  autographs were seeded 1:2 sets, but i got shut out. 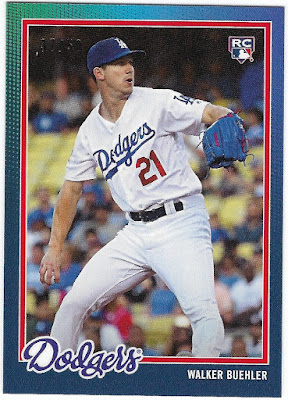 but the other was a purple (#/75) paul goldschmidt. 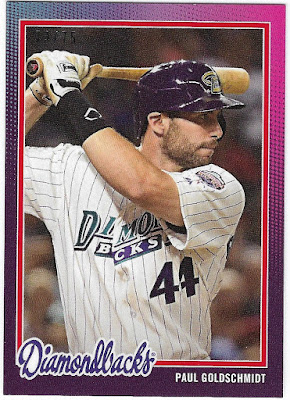 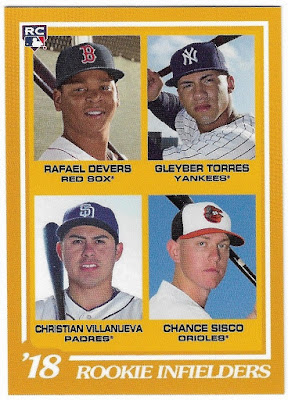 but obviously would have preferred the one with buehler (and ohtani), or the one with alex verdugo (and soto and acuna).

my then & now card, modeled after the manager cards in the 1978 set, features dale murphy and ozzie albies 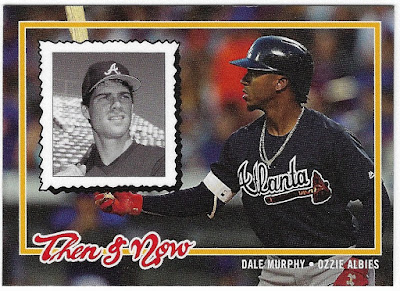 (shout out to giovanni who has been making some 1978 topps then & now cards for quite some time) there are no dodgers in this insert set, but a don sutton/walker buehler card would have made sense.

the last card in my purchase was the "famous flashback".  these are cards featuring players from the past, most of whom were in the 1978 set.  no steve garvey, or any other dodger in this set, but some nice players like rod carew, carl yastrzemski, eddie murray, jim rice, etc.  my card was joe morgan 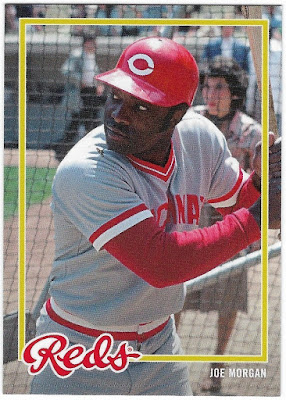 it's not everyday that a card features someone wearing a skirt.  getty says that this is a photo of little joe taking bp at shea stadium, but that doesn't help me id the woman watching the reds pregame prep.


maybe the 2,040 sets issued with this 1978 inspired design will spark some ideas at topps, and we'll see more of the original design in next year's archives.  it would be a shame to have to wait until 2027 heritage.
Posted by gcrl at 7:55 PM 3 comments: