luck is what happens when preparation meets opportunity

you've got to fall in love with preparation.

that was bill mueller's advice to an aspiring ballplayer, and it's true.  i've known a couple of professional athletes, and the practice and meetings and workouts wear on them.  it is ok with me, then, that preparation has no place in this post.

so, what happens when one of the ingredients of luck (at least according to the roman philosopher seneca who is credited with the quote i used as the title of this post) is missing?  i still call it luck, even if it only required opportunity.

you see, i was at target last night picking up a couple of necessities when i decided to double back and check the card aisle. i have not purchased much in the way of packs this year - maybe a blaster or two and some random packs - when i saw a bunch of the 2016 topps update/chrome update mega boxes.  $14.99 for 5 packs of update and 2 packs of chrome update. 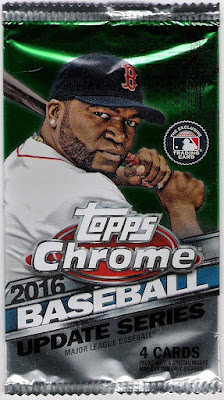 i still had a few dodgers on my update want list, and i only have the maeda chrome update card, thanks to a recent online purchase, so i picked up a box (but not the box in front).  i opened the regular update packs first (in the parking lot, of course), and was treated to one of the corey seager cards that i needed, plus kenley jansen, which was also on my want list. there were also a few inserts that i might try to flip given that they were not mariner or marlins cards.

i then opened the first of the two chrome update packs and immediately saw this. 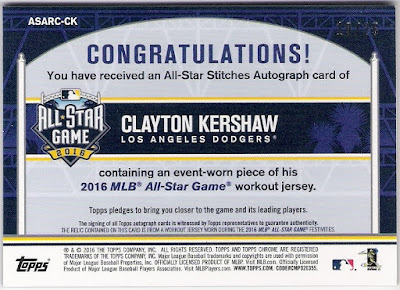 to clarify - i just saw the "congratulations" and "clayton kershaw" text. i knew it was an all-star workout jersey relic card, and i moved on to the other pack without bothering to remove the card and inspect it in all of its glory.  or, as much glory as there could be with a card featuring the greatest pitcher in the game wearing padre brown.

it wasn't until i got home that i realized this was an autographed version, numbered to 25. 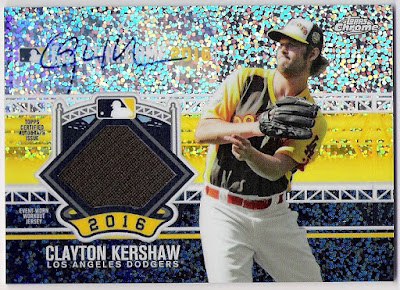 i once pulled a steve garvey jersey card (back when jersey cards were a big deal) from a pack of topps archives which was quite serendipitous and, i thought, an example of collecting karma. this, however, is beyond serendipity or karma.  it is fortuitous and lucky and pretty awesome, and it is easily in the top 5 pack pulls of my collecting experience.  others in that category would include a bill dickey cut auto from a legendary cuts release, a 1/1 mickey mantle printing plate from topps chrome, a 2001 topps tribute eddie mathews patch, a mickey mantle jersey card (with pinstripe!), and two babe ruth bat cards from two different topps tribute sets.  however, given that this card is of a dodger and that it is in particular clayton kershaw, this might be the best pack pull i've experienced.

it's not my first kershaw auto, but it is the first one that i've pulled myself and it made me pretty darn happy.

ps - whomever wound up with me for the bob walk the plank secret santa, don't worry about getting me a kershaw relic auto. i'm good for now.
Posted by gcrl at 7:55 PM 7 comments:

i'm a numbers guy. math has always been my thing, and numbers speak to me. i like numbers and the absolute certainty of things associated with numbers.  i'm also a baseball guy, which makes sense given all of the numbers associated with the sport through statistics and uniforms.

i used to remember my high school locker combination by using dodger players (dusty baker - fernando valenzuela - pedro guerrero). that's 12 - 34 - 28.  i would remember license plates using dodger players. the number portion of my first car's license was pee wee reese - davey lopes - steve sax.  most of the dodger players i referenced for these tasks were players from the team of my youth (the 1977 and 1978 dodgers), although some like pee wee and duke snider and jackie robinson came from before my time, and some others, like fernando and petey and saxy came after that and earned their place in my numerical lexicon.

one number, however, that never belonged to johnny oates (who was on those dodger pennant winning teams) was 5.  that belonged to my dad's favorite player (and the 1965 national league rookie of the year), jim lefebvre. 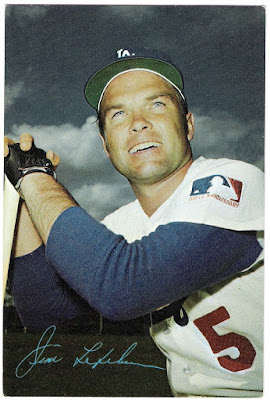 i recently picked up his 1971 ticketron dodgers card, which displays the red numeral nicely.

for almost 40 years, number 5 has been, to me, lefebvre.  never mike marshall or dave hansen or even nomar garciaparra, who was for a while my favorite dodger.  today, however, i think i am making a change.

meet the new number 5, who is coincidentally the 2016 national league rookie of the year.  that would be corey seager. 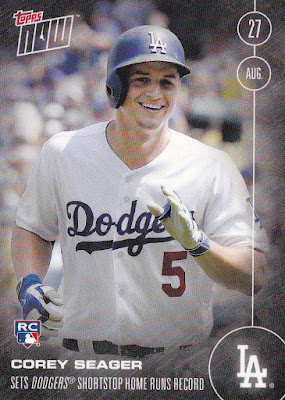 sometimes a card doesn't fit into any part of your collection, but you buy it anyway and keep it, never questioning its existence among the rest of your cards. it's just...cool.

one such card in my collection is this 2001 upper deck gold glove jersey relic card featuring former astro (and dodger) cesar cedeno. 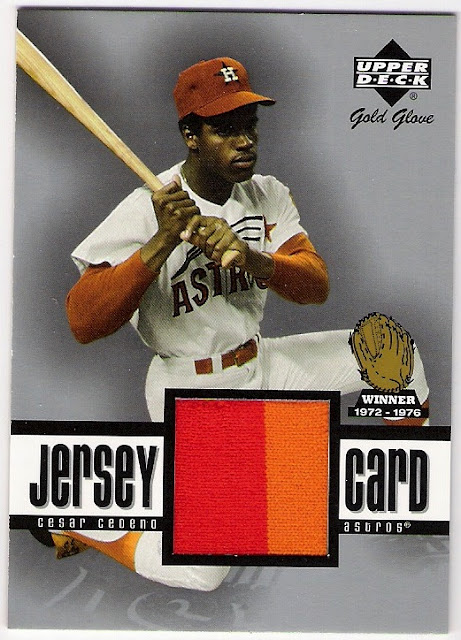 i stumbled across this card that i picked up from a bargain bin at a local card shop about 14 years ago while i was going through one of my monster boxes recently. i hadn't forgotten about it, but wasn't completely sure where it was at the moment.  now, it is officially the first card in my 'cards that i like but don't fit into any of my mini-collections' collection, and is housed more fittingly in a binder page.

if you don't have some cards in your collection that are there just because you like them, i think you might be missing the point.
Posted by gcrl at 7:55 PM 2 comments: