if a career ends and there is no final tribute, is it really over?

alex rodriguez didn't allow topps to make a card of him until 1998.  by then, he had played in 435 major league games over four seasons, won his first (and only) batting title and amassed 435 hits. fast forward to 2017 and you will find that topps failed to make a flagship base card for rodriguez for the first time since 1997.  sure, there were inserts and online exclusives, but none that showed his career stats on the back.

i had hoped that, even though rodriguez retired during the 2016 season, there would be an honest to goodness final tribute card to add to my collection.  alas, i was disappointed. thankfully, topps (through their bowman brand) issued a chrome card of a-rod for the 2017 national sports collectors convention 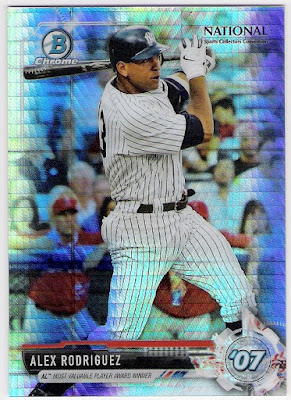 that did feature a truncated career stat summary line 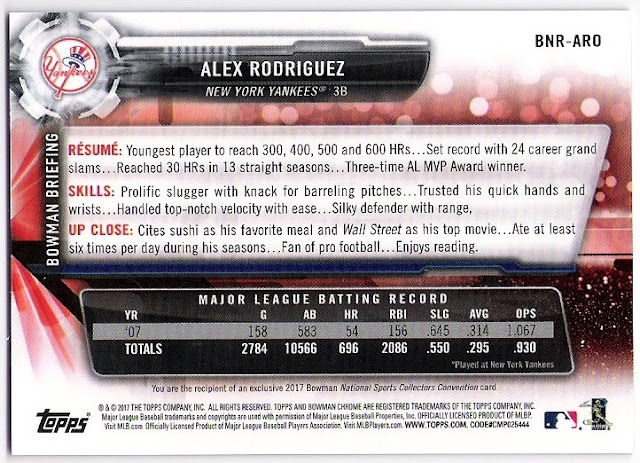 even though they were highlighting his 2007 mvp season.  it'll do.

i was never a huge arod fan, although i respected the talent and was excited when he appeared in topps product 20 years ago.  later on, i continued to respect the talent, but learned not to respect the man.  i am very much ok with the fact that he didn't stick around to get to 700 (or even worse, 715) home runs.  i am not an arod apologist, but i can appreciate what he was able to do over the course of his career, and that is why i added this card to my final tribute collection.
Posted by gcrl at 7:55 PM 3 comments:

completing a team set is kind of a big deal 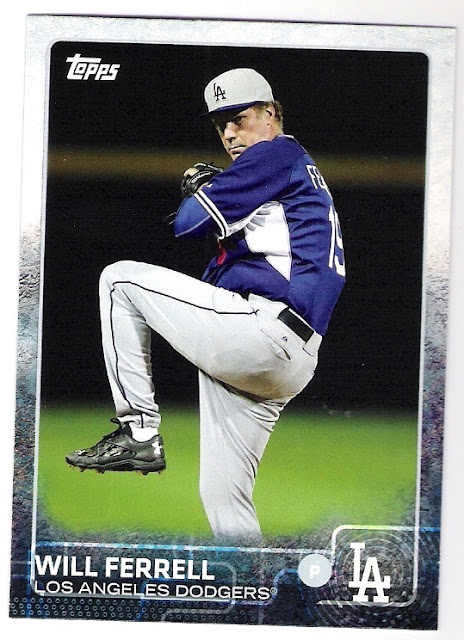 i've been slowly updating my want lists this winter, and knocking out team sets here and there as i go.  this particular card is a "one and done" team set, which is nice, however it made me remember how much i don't care for the 2015 topps flagship design.

i may or may not have crossed paths with a younger will ferrell in the late 1980's/early 1990's out in orange county as we apparently lived fairly close to one another. i would have paid him no mind, unless he was sitting in front of me at the edwards cinema.

but i digress.  while i've knocked one more team set off, this card reminds me of the nonsense that topps will publish while not being able to put vin scully on a non-autographed card of any kind or put the proper players (chris taylor) and players in the proper uniform on a non-short print (yu darvish) in their update set.  you see, i've got a fever, and the only cure is a better baseball card product.
Posted by gcrl at 7:55 PM 3 comments: