what comes close to the twins releasing david ortiz in terms of bad decisions? ownership alienating rod carew to the point that he wanted out in 1979? drafting travis lee second overall in 1996 but losing the chance to sign him due to a clerical error? drafting (but not signing) tim belcher with the number one pick in the 1983 draft (and passing over roger clemens - as did the dodgers - in the process)? giving up on luis tiant in 1971?

the tiant thing probably comes closest, but there has been no worse decision in my opinion than the one tom kelly and terry ryan made to give up on ortiz and keep matt lecroy as the team's dh.  sure, the twins had some success at the division level following the release of ortiz, but big papi and the red sox have the rings.  and, as great as it was to have jim thome in the twin cities hitting bombs all over target field in 2010, it might have been even better with ortiz.

i recently came across a bunch of ortiz cards from the bowels of my collection. i actually had a bit of a pc going in the late 90's since i was here and he was hyped locally.  this 1998 bowman's best card 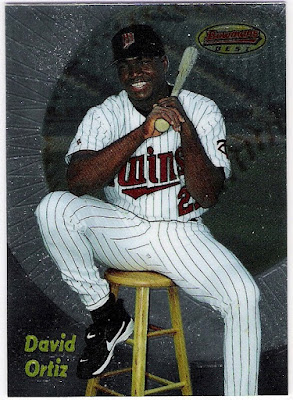 is one of a dozen or so cards i have of him as a twin.

it's unfortunate for the franchise that there weren't more.
Posted by gcrl at 7:55 PM 1 comment:

not what i was hoping for, but it still helps

readers of one of my other blogs - frankendodger - might recall that i was hoping for topps heritage high numbers to have a dodger at number 718 on the checklist. this would have allowed me to remove from the frankenset the 1992 fleer checklist that currently holds that spot.  unfortunately, topps did not cooperate.

instead, ross stripling will replace mike sharperson's 1990 target card at number 720.  the target cards were my last defense against empty spots in the frankenset, and i am happy to reduce the number of cards from that set in the monster.

i bought a 20-pack of the high number cards at target last wednesday (using my $1 off coupon found in a blaster of series 2), and actually pulled a black border version of the stripling card. 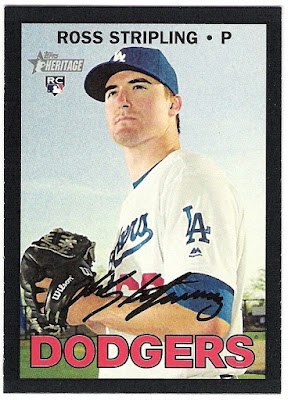 now i just need one more of those or two of the regular stripling card to make the update to the frankenset.  help would be appreciated, and as always, you will be rewarded.

as for the other dodgers in the set, let's compare them against the frankendodger cards.

i see a bunch of draws and at least three or four spots where there is no question that the heritage card falls short.  so, it looks like only the stripling card will make the frankenset.  look for an updated post over there at some point.
Posted by gcrl at 7:55 PM No comments:

who edits these things?

the cons of topps now have been well documented - price, subject selection, mailing method, etc. there was even a lawsuit filed due to erroneous text on the proof being corrected in production.  i've purchased all of the dodger cards offered so far, most at a discount from the $9.99 price so not from topps directly, and i have no substantial complaints, as it is my choice to purchase these things.  as such, part of my afternoon ritual has become checking their website to see if a dodger card was produced, and as a result i have seen all of the cards offered this year.

while there have been a few topps now cards that have given me the itch to compose a post, one recent card finally tipped the scales. it was this one, one of many gary sanchez cards that have been produced since the yankee catcher was called up 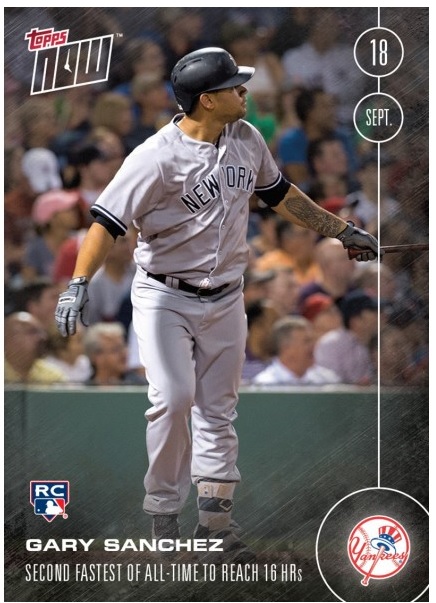 as you can see, sanchez is being feted for being the second fastest of all-time to reach 16 home runs.  ok. now, whether or not you feel that this is an achievement worthy of a topps now card is not the point. the card is made.  being a fan of the history of the game, i was intrigued enough to find out who the fastest to 16 home runs was.  so, i took a look at the back of the card. 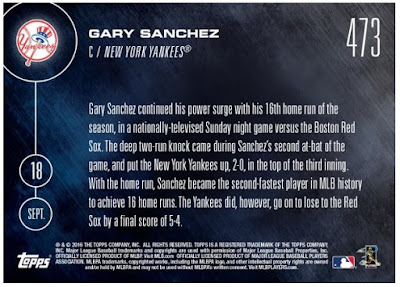 the good folks at topps feel that it is more important for me to know that sanchez hit his home run in a nationally televised game than which immortal slugger owns the record.  they also fail to tell me by what measure sanchez became the seond fastest to this arbitraty plateau.  they mention it was his second at-bat of the game, and that it came in the third inning, but that's it.  so, i am left to my own devices to find this information.

now, i remember seeing a note earlier in sanchez's run that only george scott and trevor story had reached the 10 home run mark faster than sanchez. so, perhaps one of them got to 16 quicker.  a check of baseball reference tells me that it is not so, as scott hit his 16th in his 57th game, and story hit his in his 55th game. sanchez has only played in 47 games.  this, of course, assumes that it is games played that is the measure being used.  and it could be, or it could be at bats, as the guy who hit 16 home runs in fewer at bats than sanchez (who took 156 at bats to get there) was wally berger. berger took somewhere between 145 and 148 at bats and 41 games to get to 16 for the 1930 boston braves, so he has sanchez beat on both counts.

i am left to ask, would it have been so tough to at least mention berger? the reason topps gives for creating this card begs for the rest of the story, but topps didn't bother.  if they didn't want to mention berger, why not just say that sanchez reached 16 home runs faster than any other yankee.

this past wednesday, there were four topps now cards related to milestone sort of accomplishments (plus one walk-off card), and on two of the four cards, topps does mention either the person whose record was eclipsed (dave kingman used to hold the record for most home runs in a final season - now it's david ortiz - and ichiro was the last guy to have 200 or more hits in 3 straight season before jose altuve accomplished that feat during this season). good job, topps. one of the other cards features mookie betts and nomar garciaparra, and notes that nomar is the only other player to reach 200 hits, 30 homers, 40 doubles, and 20 steals in an age-23 or younger season.  that is an acceptable amount of information, even though the card mentions that there are five other players to achieve the feat regardless of age, but does not name them.  the fourth card, however, falls short, as it tells me that trey mancini is the second orioles player to homer in his debut in the last 50 years. great. who is the other oriole to do that, topps?  well, to quote dough boy, "they either don't know, don't show, or don't care" to provide that information.  thanks to the interwebs, i have learned that it was jonathan schoop in 2013, so mancini was the first oriole to do it in three years. wow.

i mentioned up above that there were some other cards that got me thinking about posting, and one of them was joe mauer's recent card celebrating a walk-off hit of his over the indians.  here's the back 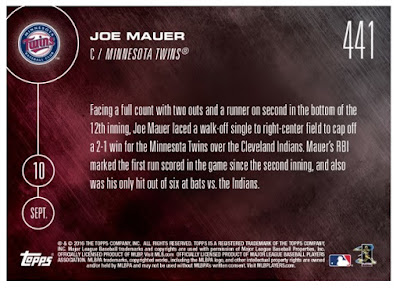 i had thought that topps would have fixed this, but it looks like they've kept mauer as a catcher even though he hasn't played behind the plate since 2013.

the season is almost over, and i will continue to buy the dodger topps now cards (including their special postseason set that will go live as soon as they clinch the division), but i am really looking forward to/hoping for a vin scully card.  it really needs to happen, and i hope that he grants the use of his likeness to make it happen. then, it will just be up to topps to get the text right.
Posted by gcrl at 7:55 PM 2 comments:

who was i and why am i here?

jeff at 2x3 heroes (one of my favorite trading partners) is holding a contest that requires entrants to make custom cards of themselves using a topps template. however, the photo used must be of the subject, less than 16 years of age and playing baseball.  luckily, i have many such photos.  and, to make jeff's life easier, i am posting my entry on this brand spanking new blog of mine. 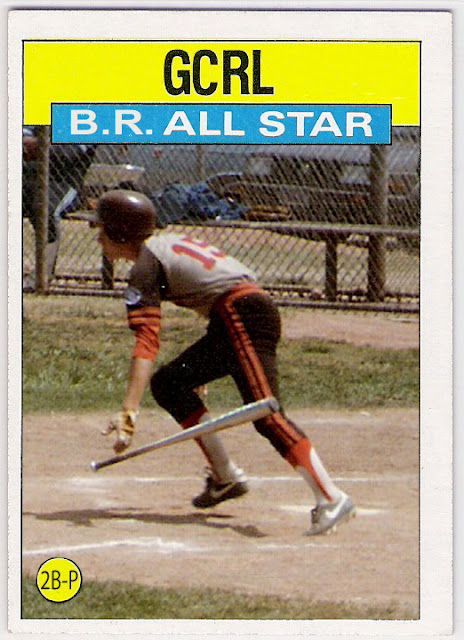 i used the 1986 topps all-star subset design first since the photo i used comes from 1986. i was on the travelling babe ruth all-star team that year. i played mostly second base, but was also used as a closer from time to time which is weird when you think about it as second basemen usually don't have an arm.  i could throw strikes, though, and i had an ok spinner as my coach called it. anyway, i wound up pitching the final inning of one of our games and kept the score tied. then, in the bottom of the frame, i hit a walk-off double.

while the card above shows me leaving the batter's box on my way to second, i used the 1985 topps all-star subset design for another card showing me on the mound in the top of the inning. 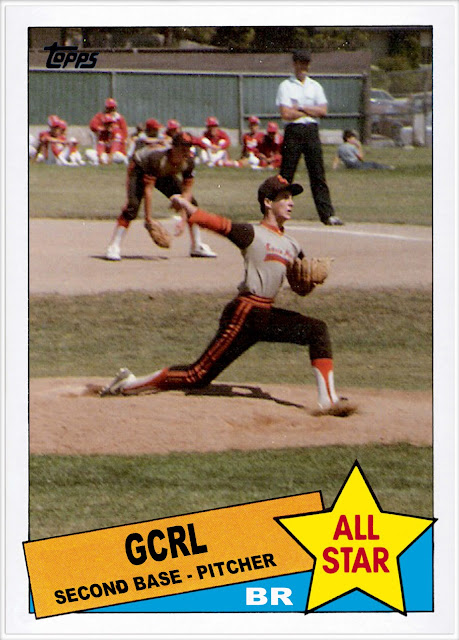 not pictured is the 1984 nlcs steve garvey fist raise as i rounded first, as my dad was enjoying the moment rather than taking a bunch of pictures.

now, with the completion of frankendodger, i figured i might as well have a place to write about cards when the mood strikes (and it has struck once or twice), so here we are.  i'll post infrequently, or frequently if i choose, and i'll write about whatever card inspires me to write. it might be a card i see online or one that i come across from my collection or maybe even one that comes to me as part of a trade package.

that's a not very subtle hint.

thanks in advance for reading these posts, such as they will be.
Posted by gcrl at 5:55 PM 5 comments: