a few months ago, i was standing next to brian from highly subjective, completely arbitrary at a card show digging through some '56 topps cards (congrats on finishing that set, brian!).  i have a few cards from that set in my collection - among them a complete dodger team set, the remnants of my sampler set, and some cards showing the double play turn.  while watching brian purchase the penultimate card for his set, i came across this ray boone card: 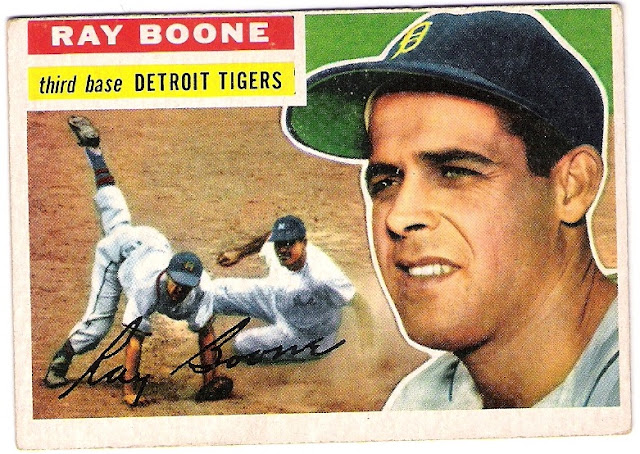 now, boone here is listed as a third baseman, although he is clearly not playing third base here, unless the yankee runner has fallen down in the basepaths well to the shortstop side of third base.  to me, it looked like a double play, but i knew that the tigers of the mid-1950's featured perennial all-star (and two-time sandy koufax no-hitter final batter) harvey kuenn locked up at short.  i had to know for sure, so i bought the card for $1 (or less) and brought it home.  a few days later, i took a trip to baseball reference.

according to what may well be my favorite website of all time, ray boone played in 135 games in 1955 - exclusively as a third baseman.  in 1954, his first full year in detroit, boone did appear in one game as a shortstop, but had zero fielding chances in those four innings.  before that, he spent half of the 1953 season in cleveland before being traded to the tigers.  i was beginning to think that the detroit player featured in the action image was not bob boone's dad, but rather kuenn or a random tiger whose face was obscured enough to pass for boone. i took a look at 1953 anyway, and found that there were three games in which boone played short after joining detroit - all of which came against the yankees in the bronx!

after beating the yankees in the opener of a four-game series in june of 1953, boone moved from third to short and into the leadoff spot for the final three games of the series, replacing kuenn both ways. in the fourth inning of the third game of the series, hal newhouser gave up a triple to mickey mantle, a single to yogi berra (berra out at second on the play), a single to gil mcdougald (who also has a double play card in the 1956 set), and then a walk to gene woodling.  newhouser was replaced by ray herbert who got the next batter, willy miranda, to hit a grounder to tigers' second baseman jerry priddy. priddy fed boone for the 4-6-3 double play to end the inning and solve this mystery - aaron boone's grandpa is turning two in a play from 1953 that is featured on a card in 1956 - and  i welcome the rare thirdbaseman card into my double play collection!
Posted by gcrl at 7:55 PM 7 comments:

the answer was "one"

last june, in a post about matt kemp and my trip to colorado to see him play for the first time, i wondered how many home runs i would see cody bellinger hit during a series in washington dc that i was hoping to attend.

it turned out that i was only able to make it to the saturday game of the series, but i did get to see the roy hit his record-tying 38th home run of the season, for which topps created a card 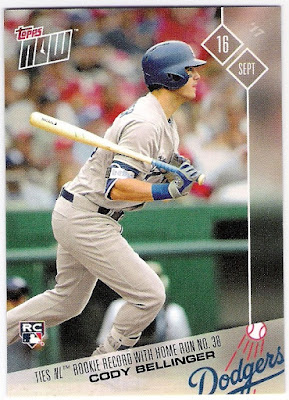 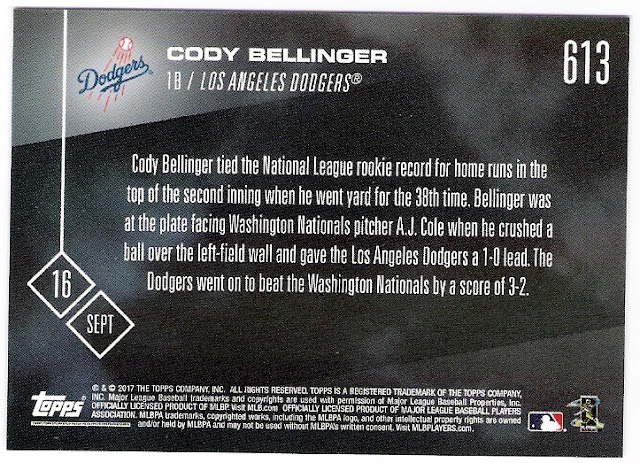 it was a good game, and i got to say hello to old friends dusty baker and davey lopes.  and, even though bellinger went yard and the dodgers held on to win a close game against the team that i figured would be standing between them and a trip to the world series, a thumbs up from the second baseman of the team of my youth was the highlight of my day.  there's no topps now card for that, unfortunately.
Posted by gcrl at 7:55 PM 6 comments: