my favorite relic set, hands down, is 2001 leaf certified materials fabric of the game.  perhaps i am biased because there is a strong dodger checklist featured, and i was able to obtain a fantastic steve garvey card numbered 6/6 (a 'jersey number' parallel) back when the set was first issued.

i will occasionally check ebay for dodger cards from this set, but with my garvey collection complete for this issue, there is not much of a priority here.  still, i recently found a seller with a bunch of cards for sale, and picked up four for my collection.

here is a don sutton 'century' parallel - that means it is numbered to 21. 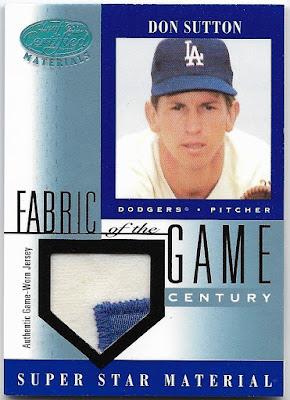 this shawn green card is a 'jersey number' parallel, 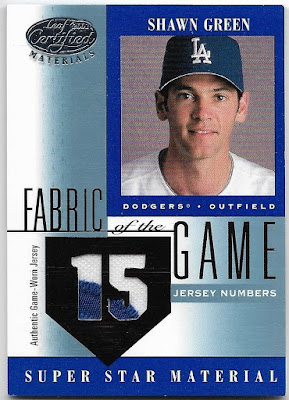 so in addition to having the jersey number stencil over the patch, it is numbered to green's familiar 15 (a number which still belongs to davey lopes, by the way). 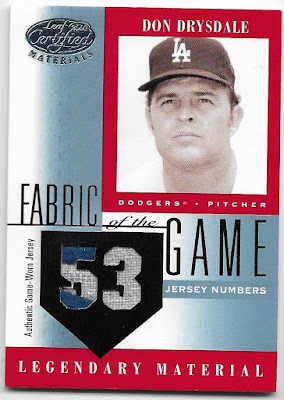 as big d wore number 53.  i now own roughly 4% of the drysdale 'jersey number' card print run, as i have another in my collection already.  this new one shows the blue dodger patch a bit better. 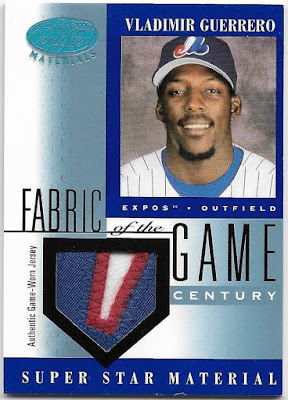 for my vladdy collection.

i'm a bit disappointed that none of these patches feature the red dodger number as my fotg garvey 'jersey number' and one of my garvey 'century' parallels do.  so, around the same time i picked those fotg cards up, i scratched that red patch itch with these fine cards: 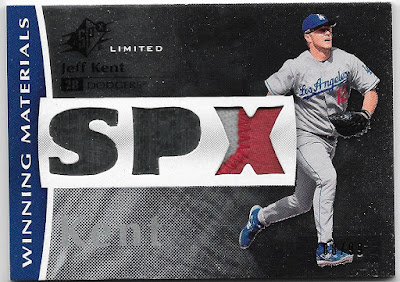 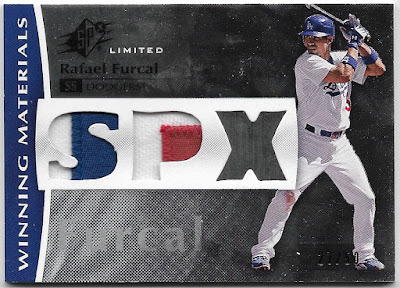 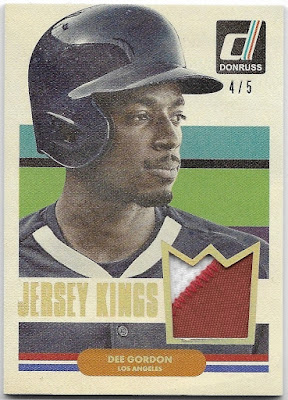 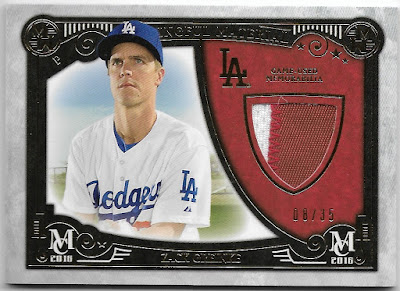 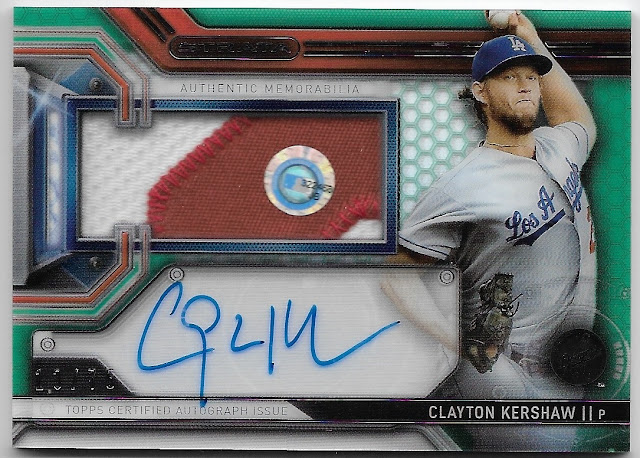 i staked my claim

i have completed several trades with wes - jaybarkerfan - and host of the most incredible group break ever.  his area 40 christmas break was mind boggling in the number of packs and boxes busted.  and, as you undoubtedly know, he gave by far the vast majority of the hits away to us fellow bloggers and collectors.

i, like everybody else who has witnessed wes's generosity, knew that this would be a very popular break.  and, even though i have a job and a family (and i certainly do not favor card blogs or collecting over them), i was able to sit down at the time appointed by wes to check his blog and put in a claim.  i took only one team - the dodgers.  i did not cherry pick teams hoping for big hits that i could flip.  it was only after wes advertised open spots in a new post a couple of days later, that i went back and added some other favorite teams of mine - the twins, the los angeles kings, and the vikings.

over the years, i've seen some comments or statements related to claims i've made in breaks that lead me to think that some feel entitled to getting their pick or that others should have first dibs on whether or not they want in. maybe i'm inferring something that isn't there, but it's happened enough times where i am fairly confident of the implication. i've been too late to claim my preferred teams or cards in breaks or trade bait posts before, and never have i felt slighted. disappointed sometimes? sure, but just in my own tardiness. never that the claiming happened too fast and was ridiculous or anything like that.  if it means that much to you, then beat everyone else to the punch.

i have also been denied a claim in breaks or trading groups a couple of times due to the host holding a spot for a certain person whom they hoped would be interested. that's fine by me, even though my money and/or return trade packages are as good as anyone else's.

regardless, i've never wished for a diluted return for any other blogger who made a claim before me.  that's weird.

anyway, i received my cards from this epic break, and here's what my claim earned me. 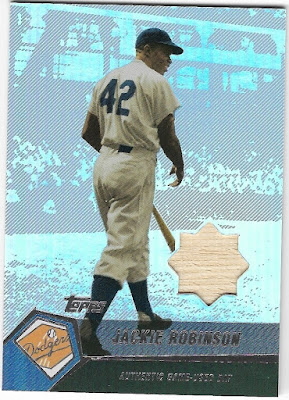 the inclusion of clubhouse collection in the break is what sealed the deal for me that i wanted to participate.  there is a very dodger friendly checklist in that release, and in addition to the jackie, i received a shawn green relic 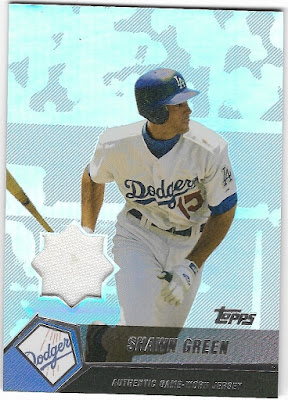 and a paul loduca relic parallel, 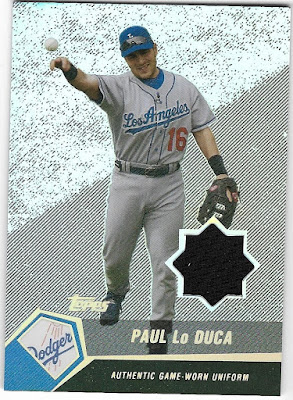 numbered on the back to 25. 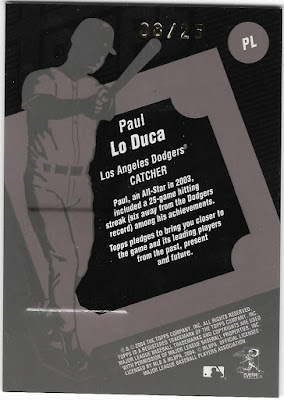 the loduca is a "uniform" relic as opposed to the shawn green "jersey" relic, so it may be pants or socks or something else. i am assuming it comes from an all-star festivities uniform.

numbered cards were also considered hits in the break, so i wound up with a 2016 panini donruss joc pederson stat lines parallel 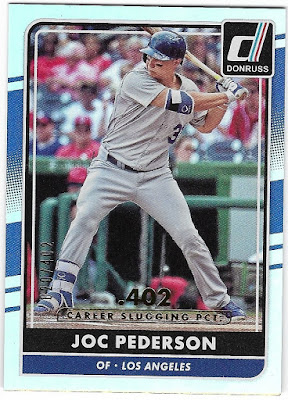 and a 2005 donruss classics orel hershiser stars of summer card 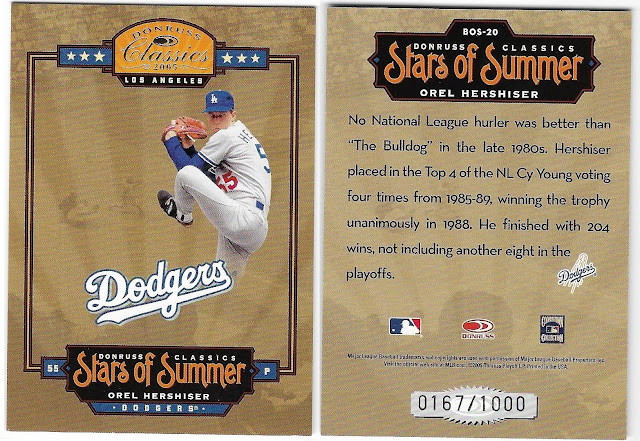 that was the extent of the dodger cards from the break, but it was definitely quality over quantity!

the other baseball team i selected, the minnesota twins, yielded just one card - a 2002 donruss rookie crusade adam johnson auto 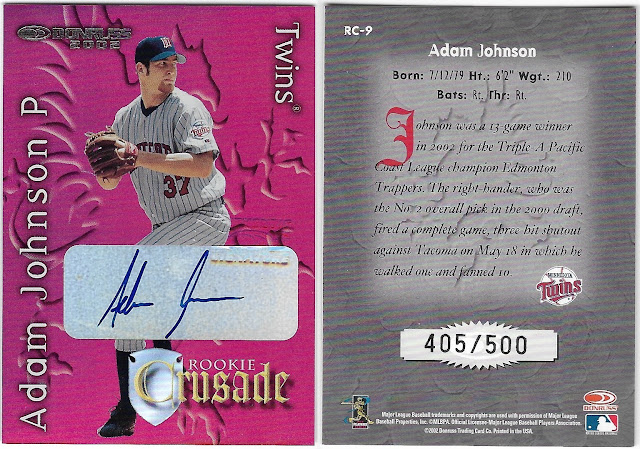 there were high hopes for johnson in the twin cities, but he ran afoul of tom kelly in addition to not performing. that was not a recipe for success during those years.

hockey! i received two kings cards - neither were of luc robitaille 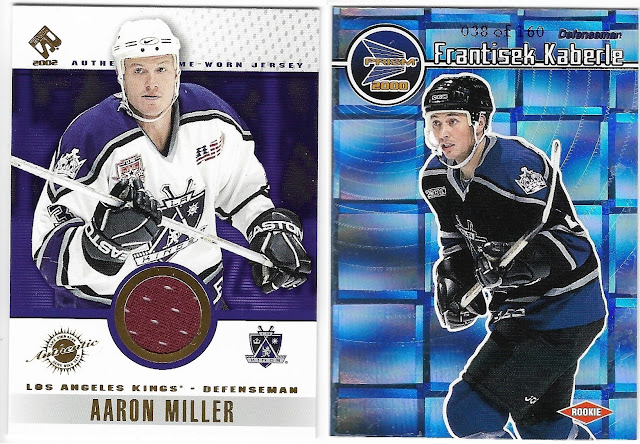 the 2001-02 pacific private stock aaron miller relic includes a colorado avalanche jersey piece.  i like that card particularly because miller is shown wearing the "am" memorial patch following the 9/11 terrorist attacks that took the lives of two king employees.  the frantisek kaberle is a holofoil parallel from 1999-00 pacific prism.

are you ready for some football? the vikes came through with this 1997 topps stadium club co-signers card 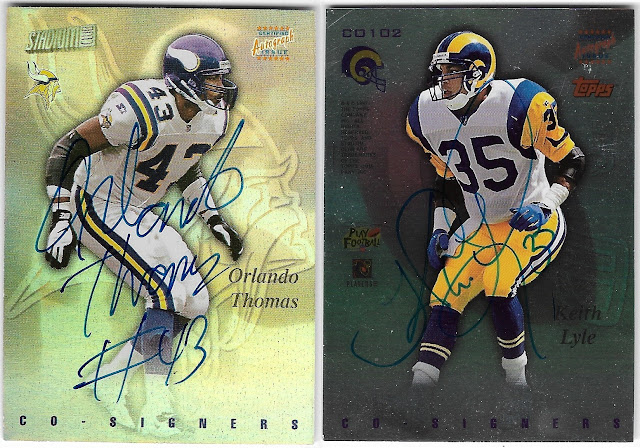 of orlando thomas and keith lyle of the rams.  i suppose that i earned the card due to thomas being on the front. i don't recall thomas, but i do remember corey chavous.  he was on the other football card i received along with phillip buchanon 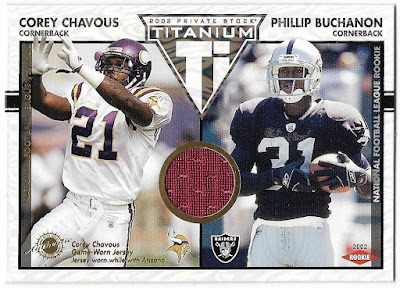 the chavous relic is from his time with the arizona cardinals. 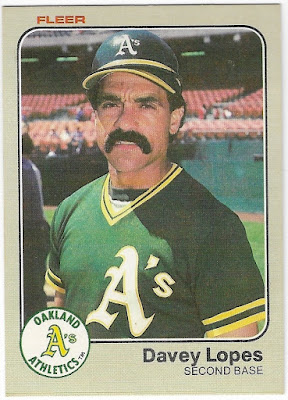 and a 1986 donruss bill russell 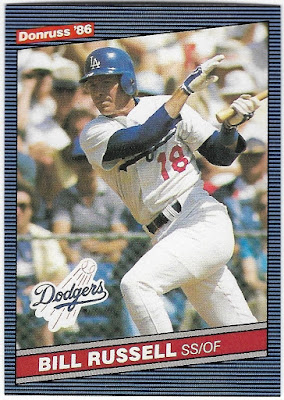 no ron cey cards (i am assuming he saved them for a well known penguin fan), but there were two steve garvey cards to round out the package.  this is a 2003 donruss signature series legends of summer card 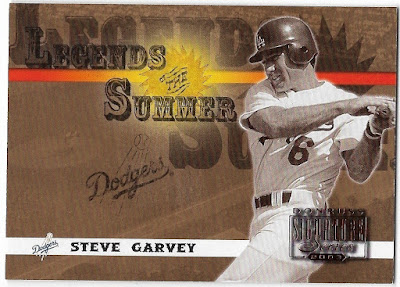 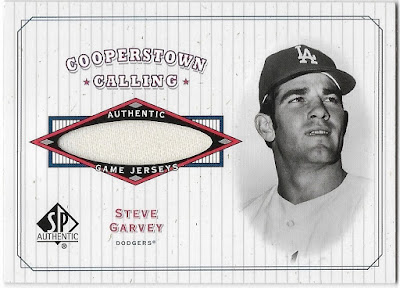 when that card first came out, garvey was still on the ballot, and i was holding out hope that he would be elected.  most of the subjects included in the set have been inducted since then, but garvey is one of the few that have not.  i think he gets another shot from the veteran's committee that covers players from the 70's, but i am not certain.  however, with the election of harold baines, i am once again hopeful that garvey does get the call.

wes, thank you for all of the contests, trades, and giveaways. enjoy your post-blogging endeavors!