he is no relation to hall of famer don sutton as far as i can tell, but former twins pitcher (and member of the 1980 ogden a's) john sutton strikes a familiar pose on his 1980 tcma card, 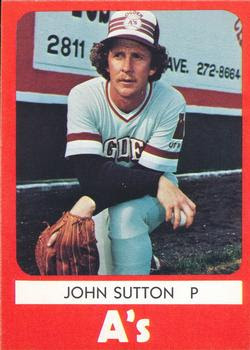 although he went for right knee down/right arm on top which is not quite the style of the master.

Email ThisBlogThis!Share to TwitterShare to FacebookShare to Pinterest
Labels: 1980 tcma

i need a couple more cards of mo'

rick monday has the fewest post-dodger career cards among his starting lineup teammates from the team of my youth.  i am excluding cards that feature him as an athletic or a cub as he was a member of those franchises prior to becoming a dodger and so i don't collect cards of mo' in those uniforms.

there was a time, however, following his retirement after the 1984 season and prior to his joining the dodger broadcasting team in 1993 that monday lent his voice to the padres.  it is really great that cards exist of this brief moment in time... 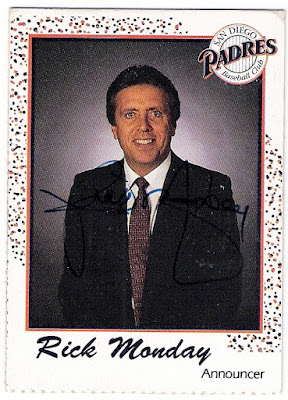 that would be a 1991 padres coke card. since it has been signed by the guy whose home run in the 1981 nlcs was a defining moment of my elementary school days, i am still in need of an unsigned version.  here's the back 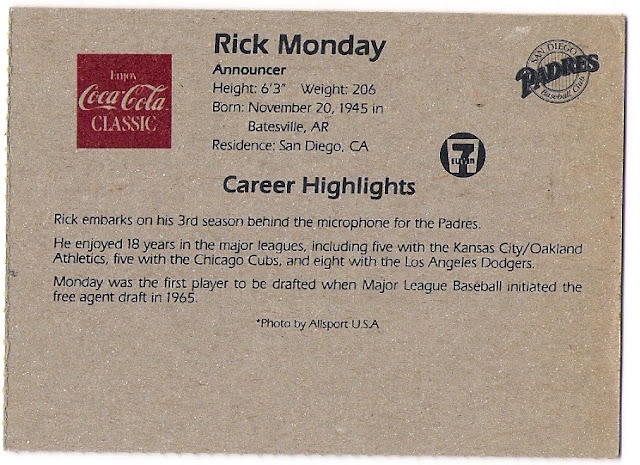 with the requisite mention of his being the first player ever drafted into mlb.

there is also a similar 1990 card that would complete my small post-dodger monday collection - here's the complete list.  monday is not my favorite play by play guy, but i can tolerate.
Posted by gcrl at 7:55 PM 2 comments:

breakdown go ahead and give it to me

gavin at baseball card breakdown was the master planner behind the blogger con nw held in portland a couple of months ago.  i had let him know i would be in town, and he arranged for the local blogger crowd to gather at a local watering hole.

the cards that gavin brought included a custom for the event, this padres legends card 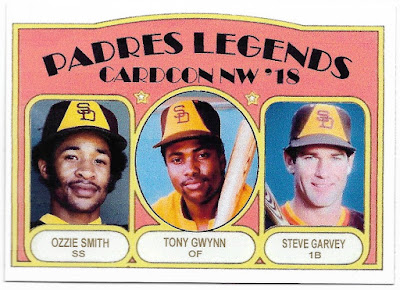 that included ozzie smith for kerry of cards on cards, tony gwynn for gavin and rod from padrographs, and steve garvey for yours truly.  i received number 2/4 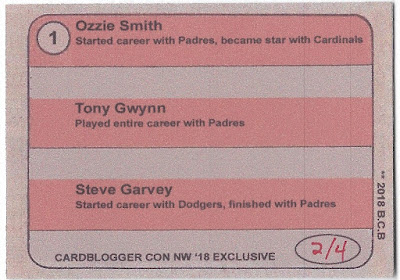 which, when added together, brings us to 6 which was garvey's number. 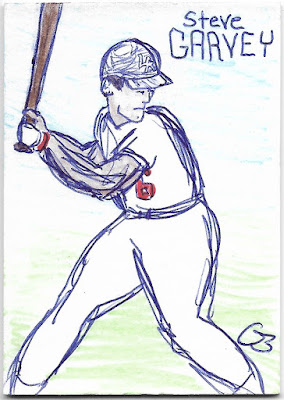 plus a bunch of other dodger cards.  one of the cards that caught my eye was this 2016 topps yasmani grandal that clearly had some printing issues. 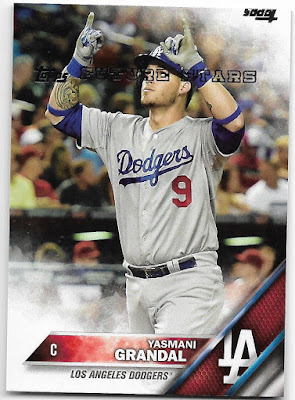 thanks gavin! i'll be sure to let you know if i am back in portland again!
Posted by gcrl at 7:55 PM 2 comments:

a tip of the cap to cardboard hogs

ken from cardboard hogs was a surprise (to me) attendee of the nw blogger con 2018 that gavin arranged while i was traveling to portland for work.  he handed over a great selection of dodger cards, like this 2018 topps heritage kenta maeda purple hot box card 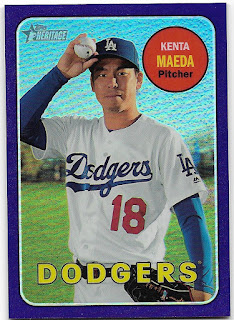 for me, this treatment makes the 1969 design a bit more palatable. 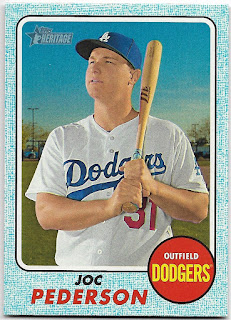 one more card from the many ken provided - a 2018 topps heritage clayton kershaw clubhouse collection relic! 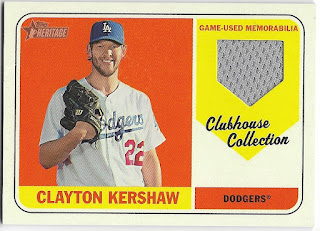 it's been a couple of months now since blogger con nw 2018 was held in portland.  kerry from cards on cards was one of the locals who attended, and he gave me a great box of dodger cards.  my favorite of the bunch was this 2016 topps stadium club corey seager card 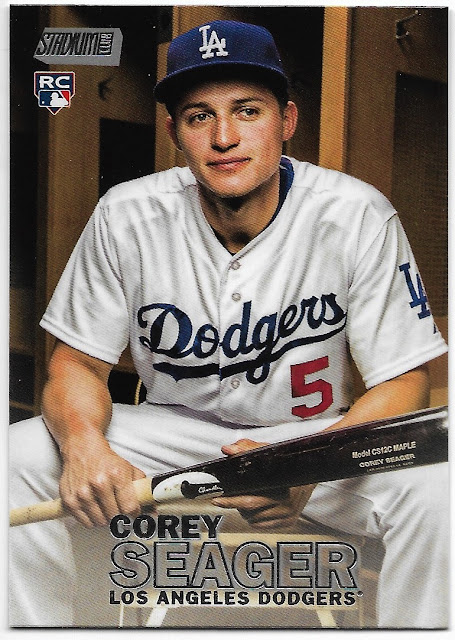 it completed my team set, and it also allowed me to delete a card out of my comc cart.  thanks kerry!
Posted by gcrl at 7:55 PM 1 comment:

here's one for those of you scoring at home

my dad gave me this the last time i was home 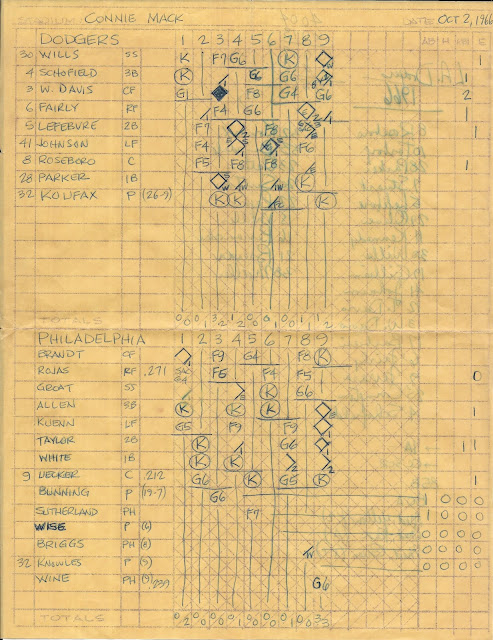 i was confused at first because he had never told me that he had been to connie mack stadium in philadelphia.  he recognized my confusion and quickly clarified that he sometimes scored games while listening to vin and jerry on the radio.  he created a scorecard and made photocopies at work (a perk in the 1960's to be sure) and away he went.

this particular scorecard is very, very cool.  it is the last regular season game that sandy koufax pitched.  on october 2, 1966, in the second game of a double header, koufax beat jim bunning and the phillies 6-3.  he struck out 10, including dick allen thrice.  koufax had some struggles in the 9th following an error, but struck out two of the final three batters he faced to complete the game.  he would, of course, retire following the world series just about six weeks after this game.

the scoring is not perfect (he failed to complete the diamond for dick schofield who scored in the second inning), and it does not match exactly with the play-by-play on baseball reference's site (bunning grounded out to koufax and not wills in the third, for example), but it is still pretty cool.  bunning's record is also incorrect in that column to the right of the positions - a column that my dad used to jot down pertinent information provided by the announcers.

the back of the paper has a listing of the dodger roster, and there is also some sort of calculation that shows this may have also been used as scratch paper at some point.  he gave me some other scorecards that were scored at various stadiums in the mid to late 1960's - candlestick, dodger stadium/chavez ravine (as the angels called it while they were using dodger stadium in their early years) - to go along with my collection of scorecards from the late '70s to early '00s.  maybe i'll share some of those in a future post.
Posted by gcrl at 7:55 PM 5 comments:

Email ThisBlogThis!Share to TwitterShare to FacebookShare to Pinterest
Labels: scorecard

2007 upper deck sweet spot classic is the best and worst of times.  luckily, the autographs on the wood and leather has not faded or bled like most of those on the pseudo-leather balls.  here's a beauty that i picked up a few months ago for my steve garvey collection: 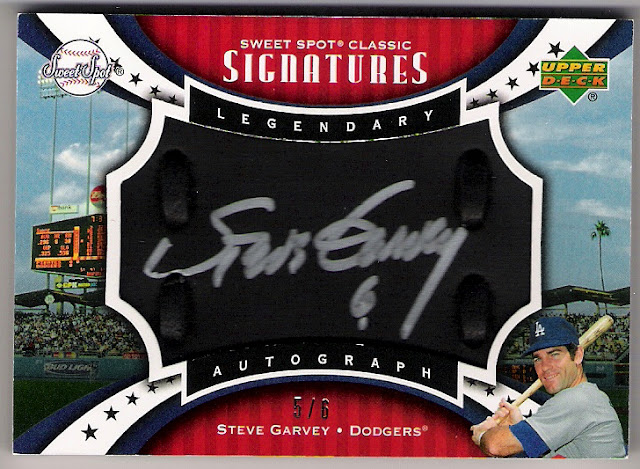 when i first started this blog, my intent was to focus primarily on single cards that struck me for some reason, whether or not they were in my collection (that was one of the ways to interpret the name of the blog - cards as i see them - get it?).  i've failed at staying true to that premise which is ok because i still collect the way i want to collect and the blogging reflects that.

anyway, this is the sort of card that i had in mind when i returned to blogging.  it's aledmys diaz's 2018 topps card. 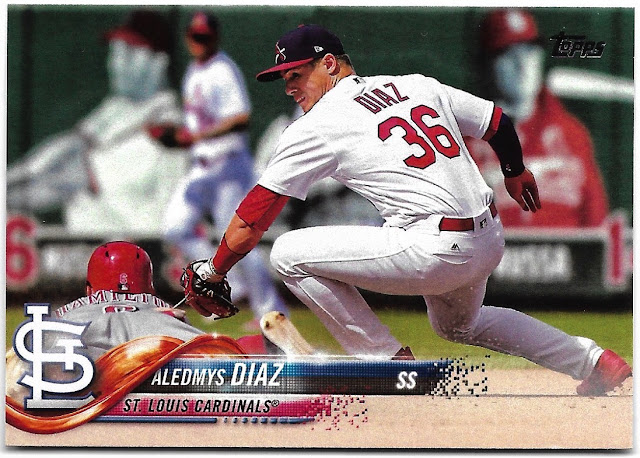 there is a lot to see here.  billy hamilton sliding in is almost lost on the card, for one thing.  plus, there are cardinal throwback uniforms being worn that are more clearly seen in the blurry outfielder in the background (note the stripe down the sleeve - sadly, no trim on the end of the sleeves).

what really caught my eye, however, are the murals in the background.  lord knows i was a big fan of the dodger stadium murals on the outfield wall, and the cards have kept their retired number murals in place for a number of years now.  they look great on cardboard, and it is even better when stan musial's old-timey hat and jersey are reflected in the on-field play.
Posted by gcrl at 7:55 PM 3 comments: