i recently stumbled across a 2004 upper deck legends timeless teams signed harmon killebrew card for a very reasonable price.  i have no intention of completing the signed set, but i do pick up a card once in a while if the price is right.  still, killebrew's certified auto card from this set would have been on the short list of non-dodgers that i most coveted. this particular killebrew card popped up in a different search, and i happened upon it shortly after the card was posted for sale.  here it is: 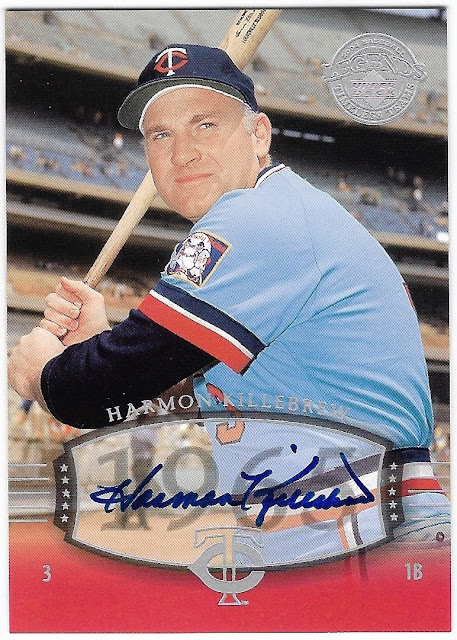 the seller did not post an image of the back of the card that features the authentication statement, but i did not want to waste time by asking for clarification lest someone else purchase the card out from under me. i knew it was an authentic signature, and i had a pretty good reason to suspect that it was certified, so i snapped it up.

sure enough, the card was delivered, complete with richard p. mcwilliam's best wishes. 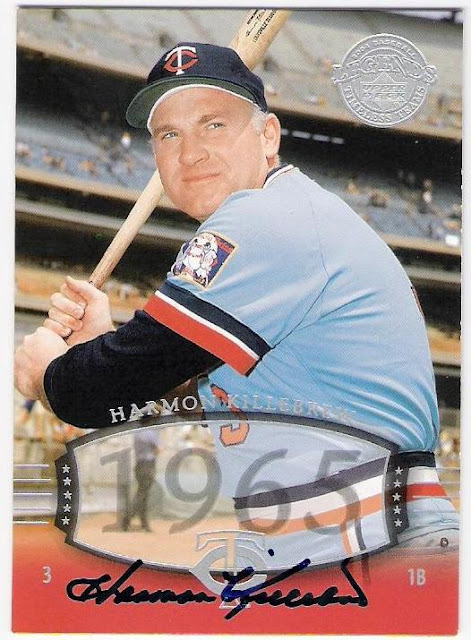 and he avoided signing the "year platter" as a few other players have done with these cards when signing through the mail.  my assumption was that harmon did that to differentiate the cards signed in person from the certified versions, but of course i really don't know for sure.  what i do know is that i am happy to have another killebrew auto in my collection (my second certified), especially from this set!  i've updated my timeless teams autograph collection as well.
Posted by gcrl at 7:55 PM 5 comments:

in hindsight, topps missed the boat by issuing the first heritage set in 2001 using the 1952 design.  there is a synchronicity lost by not matching up the design with its 50-year anniversary.  as a result, we have the 1970 card design issued in 2019. that hasn't stopped topps from stamping the buybacks included in the heritage releases as "50th anniversary" cards, even though it is really only the 49th anniversary.  it is the 50th year that you could purchase a card printed in 1970, but anniversaries, by definition, don't begin accruing until one year has passed.

anyway, the 1970 set means a lot to me. when i transitioned from a set to team collector in 1980, i set 1970 as the starting point for my dodger collection.  it was my birth year, and even though i at some point ventured in to the 50's and 60's with cards of the boys in blue, the 1970 topps set was the first "vintage" set that i completed. it also features the first card of any member of the famed dodger infield, and that was the card i was most looking forward to obtaining this year. 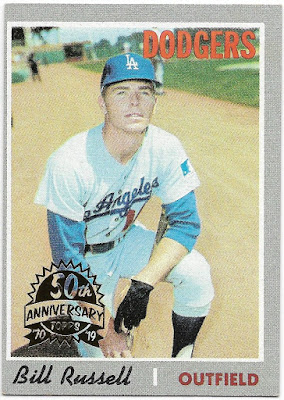 it is a little bit strange to see that stamp on a bill russell card, and to see that design replicated with current players featured.  it makes me feel old, even though the 50th anniversary of my birth isn't until 2020. by the way, bill russell buybacks will now be a thing until 2036 when the 1987 topps design rolls around in heritage. i hope i'm here for it.
Posted by gcrl at 7:55 PM 3 comments: