i remember from world history class in high school that julius caeser was part of the first triumvirate. i don't recall the names of the other two guys because history favors the bold, i guess; or at least the guy who gets murdered and becomes the title character in a shakespeare play. anyway, back in the late 1990's and early 2000's, there were a trio of superstar shortstops playing in the american league - nomar garciaparra, alex rodriguez, and derek jeter. they were shown together on this 2001 fleer premium card: 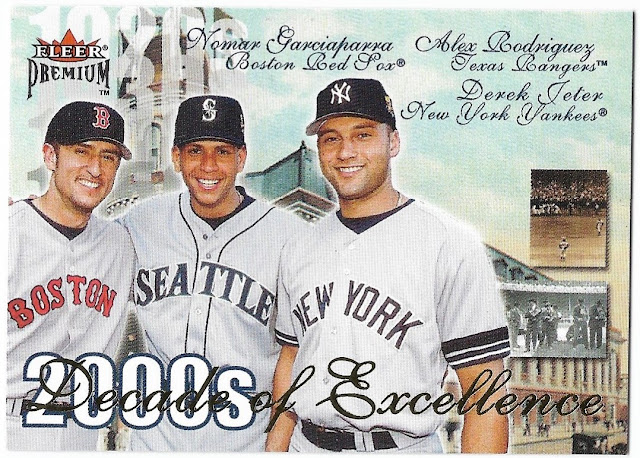 this triumvirate came to an end in 2004 when rodriguez was traded to the yankees and agreed to move to third base so that jeter could remain at short. rodriguez was the better shortstop, not to mention the reigning mvp and gold glove winner at the position, but jeter was the captain. and then there was nomar, who had two batting titles to his name but had the misfortune to be sitting on the bench during a game in which jeter went head first in to the stands and showed tremendous grit and leadership in doing so.
yes, i am being sarcastic, because while i was a fan of this tremendous trio of shortstops, jeter was my least favorite. i liked a-rod, but not as much as i liked nomar. i am glad that i got to see all three play in person during their primes, but nomar is the only one of the three that ever threw me a ball.  more on that in a bit.
today is nomar's 48th birthday, and it is hard to believe that he's been retired since the end of the 2009 season. i figured that now was a good time to share the cards of him that i have in my favorite non-dodger of the year, and favorite dodger of the year mini-collections. when shawn green joined the dodgers for the 2000 season, i switched my favorite non-dodger allegiance to nomar. part of the reason for that was that i had been in boston the weekend before the 1999 all-star game, and there was a buzz. a lot of people talking about nomar and his batting average which was around .360. i saw him play in person for the first time later that season at the metrodome, and choosing him as my new favorite player was easy.
2000: upper deck legends 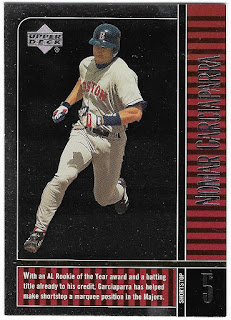 i was a fan of upper deck's follow up to their fantastic 1999 century legends release, so this choice was easy.
2001: donruss classics 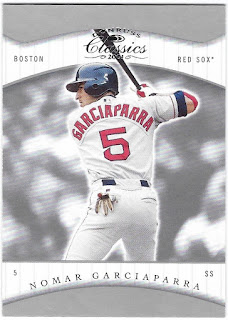 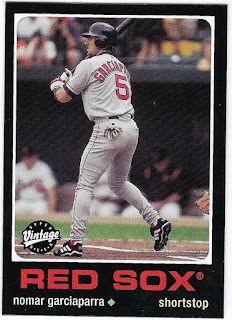 a total ripoff of topps/o-pee-chee but i loved it.
2003: upper deck first pitch 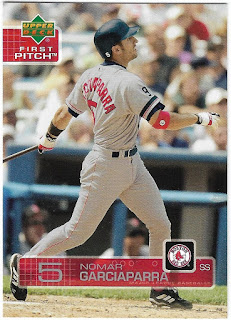 i almost used this card to represent the ted williams memorial patch/armband in my memorials collection, but didn't. i'm glad it's in this mini-collection.
2004: topps traded 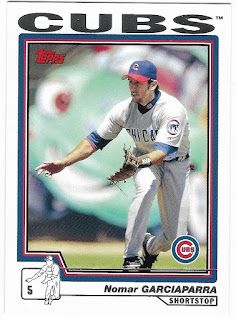 i really like seeing the exxon cars from pac bell/at&t/whatever park on cards. i thought about having a mini-collection of them at one time, but decided against it. i am glad that this card has made its way into one of my mini-collections after all.
2005: topps heritage new age performers 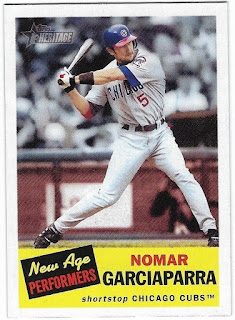 i don't know what the criteria for being a "new age performer" was, but nomar was definitely not performing at his best after the trade from the red sox. he missed over three months of the 2005 season due to a terrible hamstring injury, but came back to hit .318 over the last two months of the campaign.
and then the dodgers signed nomar as a free agent and traded away milton bradley who had been my favorite dodger during the 2005 season. sliding nomar into that slot was a no(mar)-brainer.
2006: upper deck national baseball card day 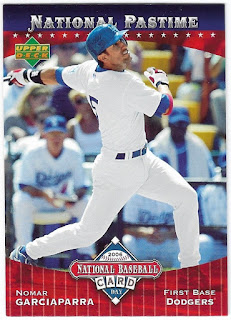 his first half of the 2006 season was so great. he was hitting around .360 at the all-star break (just like '99!) and i got to see him play in person in four different ballparks in june and july. in those games i saw at coors field, the metrodome, angel stadium, and dodger stadium, he was 9 for 23 with five doubles and a home run. my favorite memory, however, is from the june 30 game in anaheim. we were sitting behind the dodger dugout and after the end of one of the innings that ended with a putout at first base, nomar threw the ball to me. i, of course, handed it over to a kid in my row and received nice applause from the crowd around us.
unfortunately for nomar, the dodgers called up matt kemp in 2006 and he became my favorite dodger the following year. still, nomar remains one of my favorite players to have followed and root for. happy birthday to him!
Posted by gcrl at 7:55 PM