there was no doubt in my mind back then that the card i was most happy to obtain in 2007 was derek jeter's topps card with george w. bush in the stands and mickey mantle in the dugout, but this mantle card was a close second. 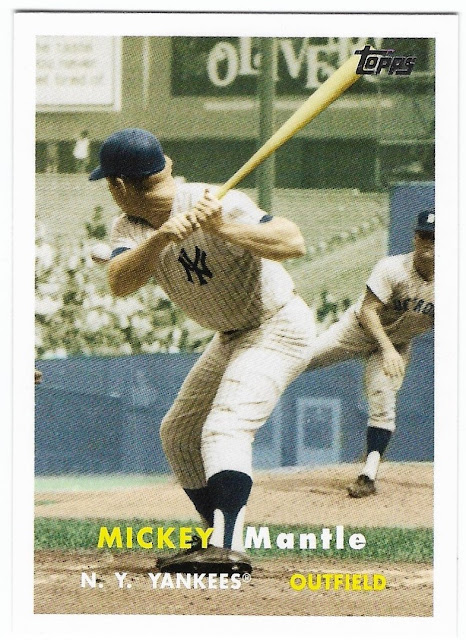 this is one of those "mickey mantle story" inserts from 2007 topps that got to be a bit much. however, i was really happy to see this card come my way in a pack that year. it shows the mick coiled up with the baseball just visible next to his right arm. the detroit pitcher looks like he is right on top of mantle, too. it's a great baseball photo that conveys a lot of anticipation and action.  however, my favorite part is in the background.
just like with the 1971 topps ken mcmullen card, this card shows the original monuments in yankee stadium that were in the field of play. the mcmullen card shows the two vertical monuments for miller huggins (it is partially obscured by mantle's left leg on this card) and babe ruth. the mcmullen card also shows the plaque on the wall for jacob ruppert which is mostly blocked on this card by the pitcher's left leg. however, this card comes through where mcmullen's did not with a glimpse of the plaque for lou gehrig (you can see the relief of gehrig's bust next to mantle's right thigh).
i have a great interest in baseball history which was stoked as a six year old listening to vin scully on the transistor radio that my dad would set on the dining room table in the evenings as he worked through paper work. one part of the game's history that is most visible are championship pennants and retired numbers. the yankees were the first to install these sorts of tributes, and i am always pleased to see them on cardboard. even though these monuments don't exist in this form anymore, i am looking forward to visiting the display at yankee stadium someday.
Posted by gcrl at 7:55 PM