i've been to kauffman stadium in kansas city three times to catch a baseball game. each time, it's been the royals hosting the minnesota twins - twice by design and once by coincidence.  i have this 2006 topps gold parallel card in my "stadiums i've seen games in" mini-collection: 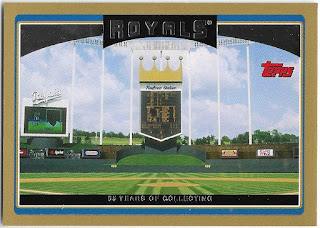 i picked that card up from cards from the quarry in one of his sunday pwe trade bait posts, and i like it. it shows the stadium as i remember it from my first visit (although the fountains aren't turned on), before there was seating out in the outfield.
anyway, the first time i went to a game there was in 2004. i was in chicago for work but flew to kc to meet some friends there to catch a day game on july 17 - 17 years ago today. it turned out to be a pretty good game as johan santana and joe nathan combined on a one-hitter. it was the second one-hitter i remember witnessing (the other was a jimmy key effort against the angels in the 90's). there was no suspense, however, as the royals' lone hit came in the bottom of the second inning. a couple of other things stand out - we met torii hunter's high school coach in the stands, and it was a t-shirt giveaway day. somebody brought a "circle me bert" sign 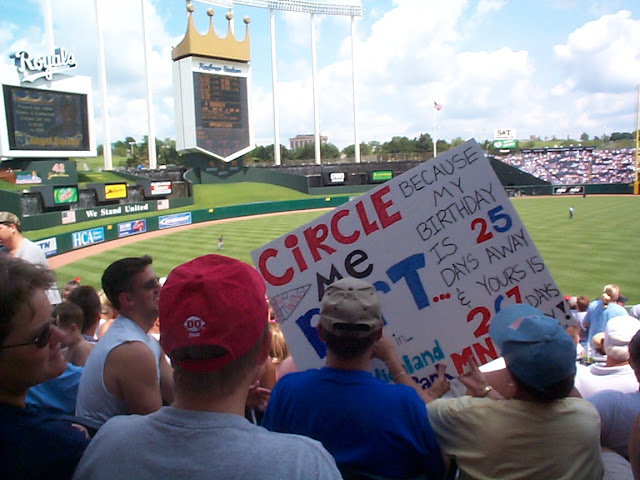 even though the game wasn't being televised back in the twin cities. we also paid our respects to the george brett statue outside the stadium after the game. 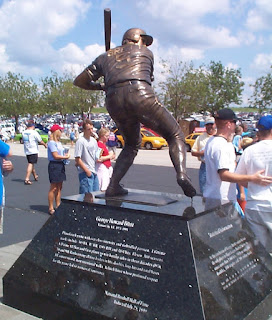 can't tell if the statue has soiled pants or not.
the second game i saw there was on august 30, 2005. i was in kc for work and it just so happened that the twinkies were in town. i headed to the stadium and was able to get a single ticket just a couple of rows up from the field near the twins' dugout. it was (jose) lima time for the royals that night, but the twins were victorious thanks largely to a 3 for 5 effort by joe mauer.
the third game i attended was on july 26, 2010. i went with a friend and our sons which made for a good time. unfortunately, we didn't know that the negro leagues museum was closed on mondays, so we struck out on taking in the history on display there. this game featured a nice pitching matchup of francisco liriano and zack greinke, the reigning american league cy young award winner. liriano got the win with 7 clean innings (no runs, 3 hits, no walks, and 8 strikeouts) while greinke was pummeled for 8 runs in his four innings of work, including six in the top of the first inning. the twins hit for the cycle in that frame, with danny valencia's first career home run (a grand slam) finishing the feat. the big news of the night, however, was a five for five, 7 rbi performance by mauer. mauer had a chance to go six for six, but was pinch hit for in the 8th. the twins won 19-1.
here are a few photos i took. first pitch (to former dodger jason repko): 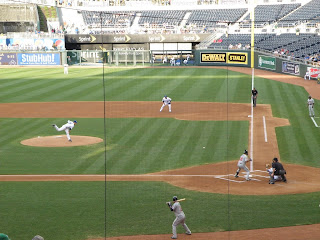 a closeup of greinke: 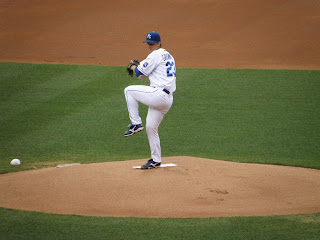 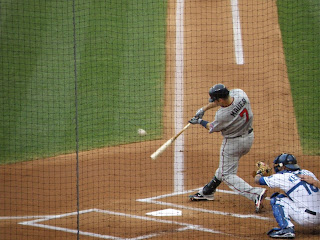 jim thome's first at bat (he struck out): 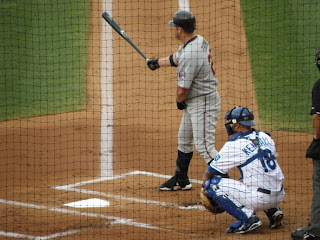 and a later thome at bat with the missouri sky on display: 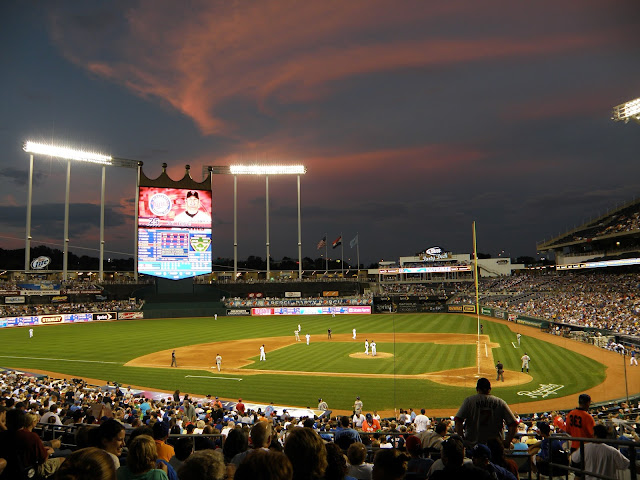 what a great night that was to be at a ballpark. if you haven't been to kansas city to take in a game, i highly recommend it!
Posted by gcrl at 7:55 PM