some all-star cards for my garvey collection

the all-star game took place last night, although, for me, it is not the event it used to be. back in the late 1970's and early 1980's, i wasn't able to see any player i wanted to see at any time during the regular season. now, with the mlb.tv package and mlb network, i have access to all players at all times. no, back then, the all-star game was a chance for me to see the best players in the game all at once and it was must-see tv.
in honor of last night's game (of which i watched very little), i figured i would post a few cards that i've added to my collection over the last few months that have an all-star game connection.  first up is this 1982 fleer card celebrating the 1981 midsummer classic that was played in cleveland. 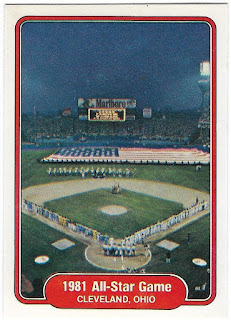 when i first pulled this card from a pack back in 1982, i thought it was cool but also was annoyed that fleer didn't do this for the 1981 set. with the 1980 all-star game being played in dodger stadium, that would have made for a nice piece of cardboard. still, i appreciated the card in '82 and am thankful for the pirates' yellow road unis which bring some color to the card.  now as i mentioned, i've had this card since 1982, but i added one to my steve garvey collection. i always knew that garvey was in the photo, but didn't have access to any video until something called youtube came about. i re-watched the opening ceremonies and introductions during the pandemic and was able to place the garv along the third base line within the red oval: 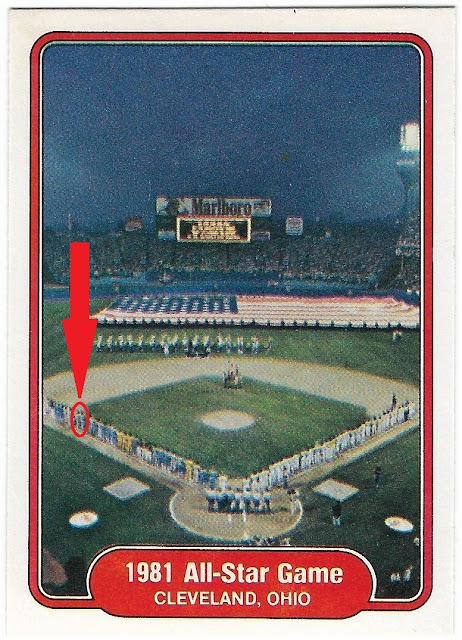 he's standing between bob knepper and dusty baker there. other dodgers on the line during introductions were pedro guerrero and burt hooton. davey lopes was introduced with the starting lineup and is much closer to home plate. fernando valenzuela was also introduced with the starters, but he was in the bullpen. it was interesting to rewatch that after nearly 40 years and hear the crowd reaction. there were a lot of boos for the national leaguers (and the yankees), which i can understand i suppose. cleveland native mike easler got a nice reception as did the rookie phenom fernando and legends like tom seaver and nolan ryan, but garvey and lopes were booed pretty heartily. i suppose the fact that this was the first baseball game played in months as a result of the strike influenced the fan reactions.
so that card might be considered by many (most?) to be a stretch for a player collection and that's ok. i like having it in my garvey collection because of how much i looked forward to the game each year.
moving on, here are a couple more all-star game cards that i've added to the garvey collection. 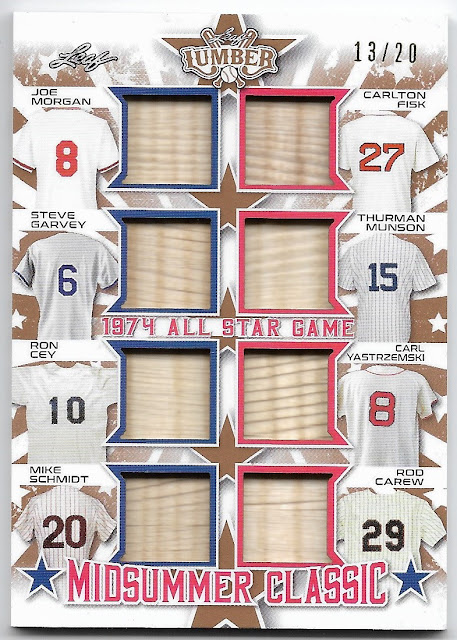 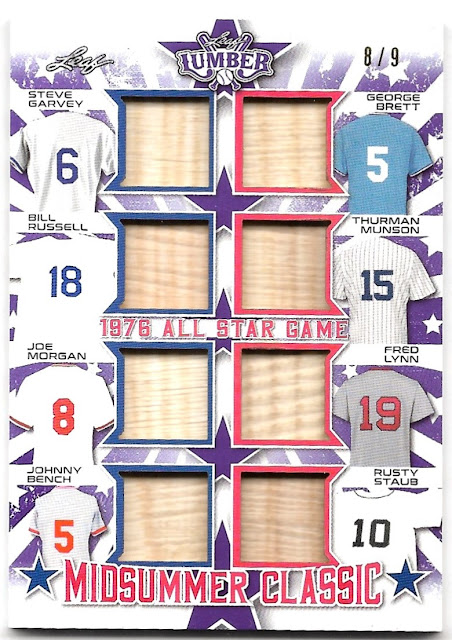 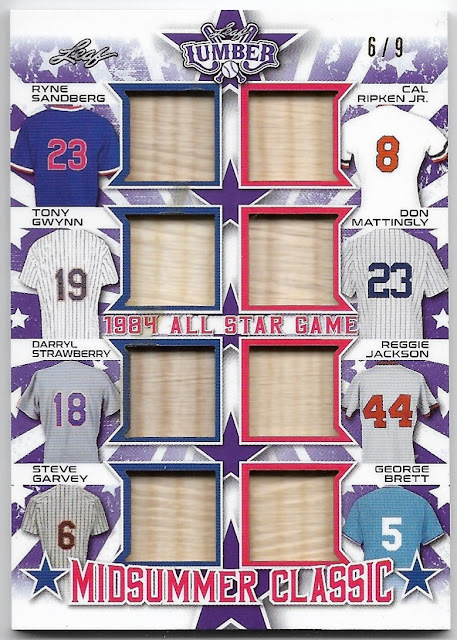 these cards are all from 2021 leaf lumber - specifically the "midsummer classic" subset. i showed another card from this subset earlier that was related to the 1979 all-star game, and garvey is also featured on cards shown above representing the 1974, 1976, and 1984 midsummer classics. the top one (a base bronze version) references the 1974 all-star game in which garvey, as a write-in starter, won the mvp award. the second one (which is a purple parallel) represents the 1976 all-star game, and the third (also a purple parallel) reps the 1984 all-star game.
even though the cards have no players in common other than garvey, both mike schmidt and rod carew (shown on the 1974 card) started the 1984 all-star game. in fact, carew started the game over mattingly, so it would have made more sense to have him on the '84 card than mattingly. the other players on that card - ryne sandberg, tony gwynn, darryl strawberry, garvey, cal ripken jr, reggie jackson, and george brett - were all starters.
similarly, reggie jackson (shown on the 1984 card) started the 1974 game as well. niether carlton fisk nor carl yastrzemski started the 1974 game, nor did schmidt, for that matter. all were on the roster and made appearances in the game, so i suppose it's fine. still it would have been nice to see pete rose or hank aaron or jimmy wynn in schmidt's place, and maybe have dick allen and brooks robinson on the american league side.
the 1976 card features seven players who started the game (great to see rusty staub!). the lone exception is bill russell, who was behind starter dave concepcion and reserve larry bowa on the depth chart. russell did make it in to the game, however, replacing bowa in the late innings and grounding in to a double play.
i know these leaf cards aren't everyone's cup of tea, but i enjoy seeing garvey matched up with his contemporaries; guys that i watched play together once a year and followed in the box scores. now, on to the second half!
Posted by gcrl at 7:55 PM