"you'll see that life is a ball again; laughter is calling for you. down at our rendezvous, three's company too"
for miguel cabrera and friends that rendezvous took place at the 2013 all-star game at citifield, and the moment was captured on a 2013 topps update photo variation card: 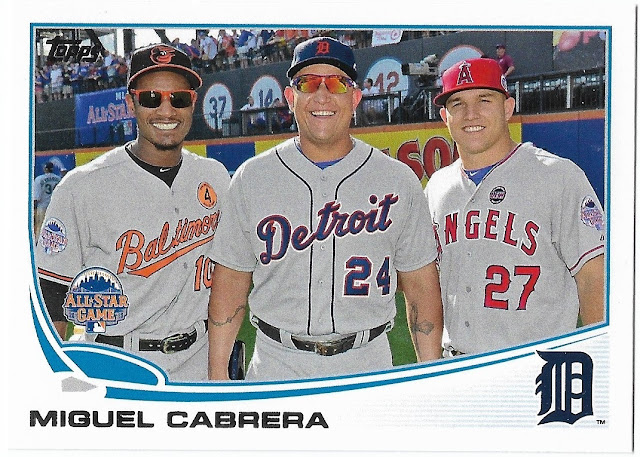 despite the presence of adam jones, mike trout, and even felix hernandez there in the background, and even though jones and trout are wearing memorial patches for earl weaver and dr. lewis yocum, respectively, i added this card for a different reason.
i put it in my 42 mini-collection instead of my lurker or memorial patch collections. the 42 collection consists of players wearing number 42 on jackie robinson day, as well as appearances made by the retired number 42 on the backgrounds of cards.
the other retired met numbers on display belong to casey stengel (37), gil hodges (14), tom seaver (41) - hidden behind cabrera's head, and jackie (42). the placard behind trout's head is one that says "shea" in honor of bill shea, a lawyer who was a large part of mlb's expansion in 1961 and 1962 and the namesake of the mets' longtime stadium. since the 2013 all-star game, the mets have also retired mike piazza's number 31. so, fully half of their retired numbers are those of dodger greats.
here's another "three's company" card featuring trout. 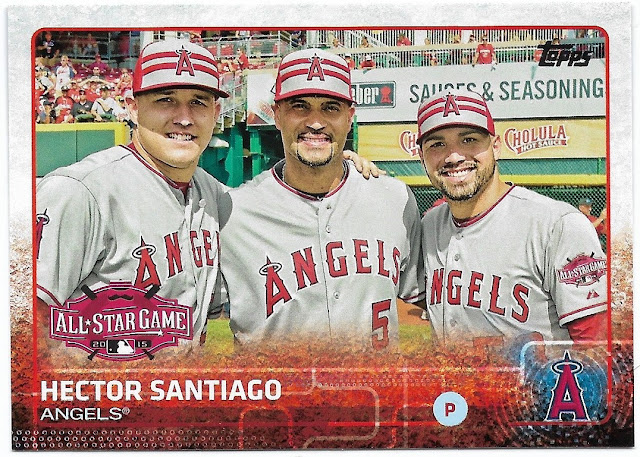 that's a 2015 topps update hector santiago card - not a variation by the way. this one is in my lurker collection thanks to the presence of trout and albert pujols.
i am kind of looking forward to real all-star game cards in this year's update set.
Posted by gcrl at 7:55 PM