my favorite cards of the year - 2001 edition

i recently introduced my mini collection focusing on my favorite cards from each year that i've been a collector. the basic gist is that i wanted to create a space for the cards that i most appreciated having in my collection in the year that they were released. these were cards that i acquired in the year that they were issued, and that i considered to be my favorites at the time. i have disallowed (most) cards that are already in other mini collections in order to avoid having a mini collection consisting of more steve garvey, double plays, and dodger stadium cards.
my collecting was at a peak of sorts in 2001 after considering leaving the hobby in 1999 and before i would consider the same in 2003. the advent of game used cards piqued my interest, and i was also intrigued by a number of sets like greats of the game, ud decade 1970's, and vintage issues from topps (heritage), fleer (tradition), and upper deck (vintage).
favorite non-dodger card: topps antonio alfonseca 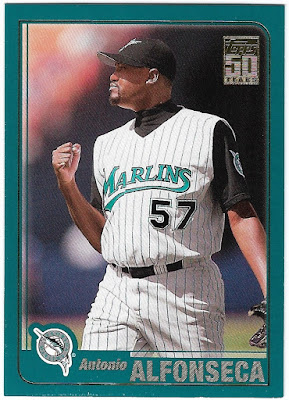 i believe that it was during the 1997 world series that i learned of alfonseca' nickname (el pulpo - the octopus) and that the reason for that nickname was that he was polydactyly with six fingers on each hand. after that, i began looking at my cards to see if i could find one that showed his extra digit. unfortunately, i only had his 2000 fleer tradition card in my collection before this card was issued. i was happy to see that it gave a good look at his right hand and that extra digit. it would seem that it has no affect on his pitches, and i guess i liked this card more than i probably should have at the time, but as a kid i was always interested in ripley's believe it or not kind of stuff, and a six-fingered big league pitcher fit the bill.
favorite dodger card: upper deck vintage steve garvey timeless teams bat relic 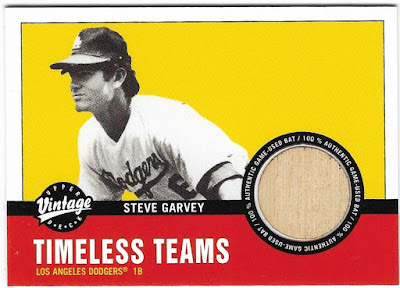 so i know up top i mentioned that one of the rules of this collection is that i exclude steve garvey cards. well, rules are meant to be broken and this card was such a joy to discover that i decided to include it in this collection (in addition to my team collection and my garvey collection). i was talking with a coworker who had casually begun buying cards in 2001 about game used cards, and it occurred to me that i should search ebay to see if there were any cards being produced of garvey. up until that point, i had only seen game used cards from pacific that featured current players, but upper deck was putting out cards of retired players, too. i was shocked and then excited when the search results included this card. it is the first garvey relic i ever owned, but was followed by an onslaught of relic cards of my favorite player that year from other releases, including leaf certified materials which remains to this day my favorite game used set.
up next, 1997. stay tuned!
Posted by gcrl at 7:55 PM