2020 was a crappy year overall. there were some really high highs, don't get me wrong. but there were many lows. that was true in baseball as well. one of the lows came on august 31 when tom seaver passed away. we knew that seaver was suffering from dementia and that his passing was coming, but for me it compounded the loss i felt outside of the game.
seaver's first team, the mets, began wearing a memorial patch on their right sleeve soon thereafter. the patch is visible on pete alonso's 2021 topps 1965 redux card from series 2 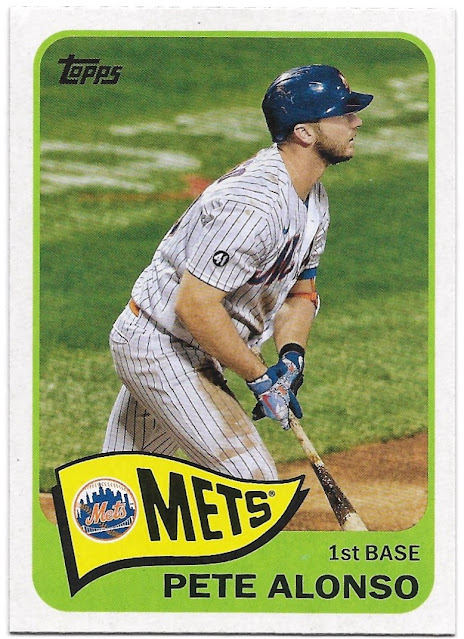 the patch was a simple black circle with seaver's jersey number inscribed in white - a pretty standard memorial patch.
while not unprecedented, the mets chose to continue to honor seaver in the 2021 season. without going back to confirm, i think the yankees were the first to span multiple seasons for a player with their memorial for yogi berra back in 2015 and 2016 (the cardinals and angels had multi-year memorials for owner august busch and coach jimmie reese, respectively, in the 1990's). as with berra, i assume the mets chose to wear a patch for seaver in 2021 due to the fact that he passed late in the 2020 season. however, while the yankees wore a black number 8 on their sleeves for yogi in both seasons, the mets changed things up with their 2021 patch for seaver. here it is on this 2021 topps now francisco lindor card: 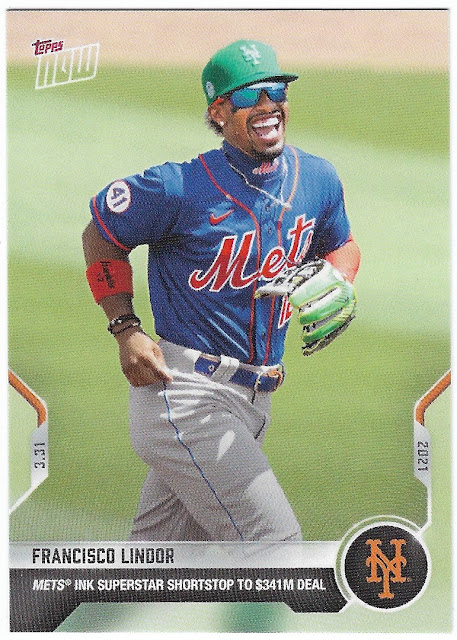 in this version, the white background is actually pinstriped, with the number 41 in blue surrounded by orange, and the whole patch has an orange border. it looks very metsy.
as far as i can tell, the reds did not wear a patch for seaver (nor did the red sox or the white sox, for that matter), but i will always think of him as a red. i mentioned in my seaver hall of famer collection post that i associate seaver's 1978 topps card 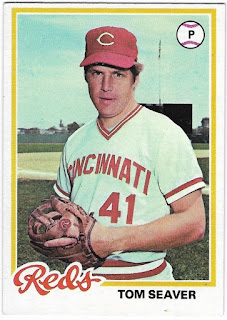 with my mom, and that association is stronger than ever. i keep one of those cards in my "meaningful and just because" mini-collection for that reason.
there are a couple of other examples of memorials carrying over from 2020 in to 2021, and i'll expand on those in another post. stay tuned.
Posted by gcrl at 7:55 PM