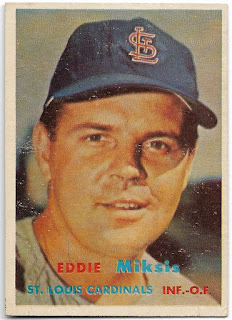 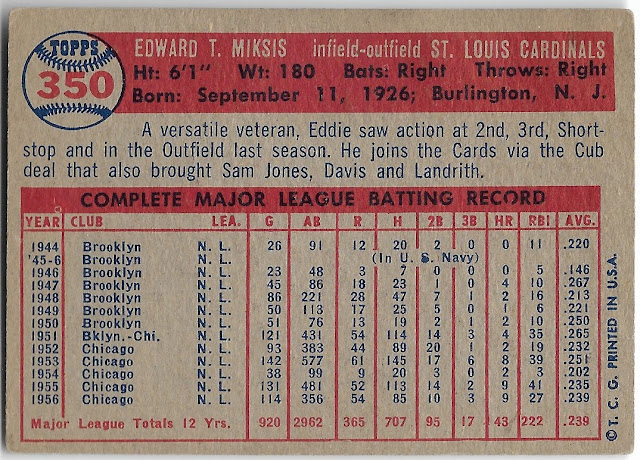 eddie miksis received the inaugural number 350 as far as standard card sized topps sets go, and in no way represents this spot on the checklist as a "hero number". back then, topps was still putting the major stars up front in the set - ted williams was card number 1 in the 1957 set for example - and guys like miksis filled in the set later on. not that he was a bad ballplayer. miksis made his big league debut before his 18th birthday and backed up the likes of pee wee reese and jackie robinson while with the dodgers prior to a late-1951 trade to the cubs. for the 1957 season, miksis joined the cardinals, but didn't play for them much. he ended the season in baltimore.
1967 topps #350 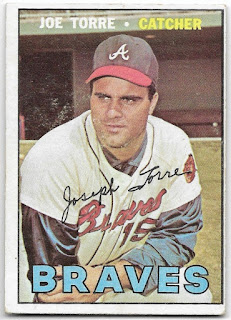 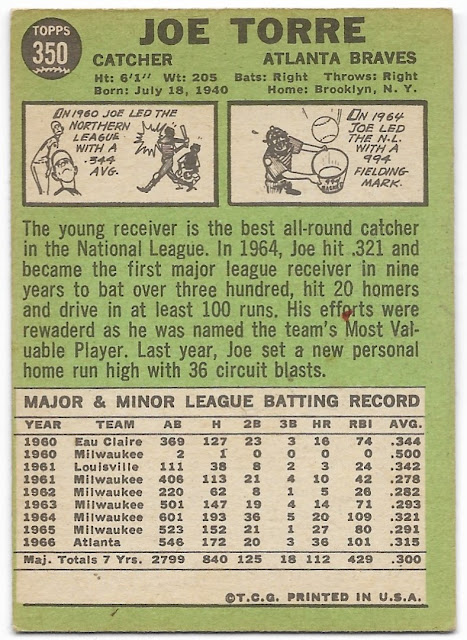 joe torre was most definitely a star when this card was issued. in the team's first year in atlanta, torre maintained his status as an all-star for the fourth consecutive season. the future mvp saw his production dip in 1967, and he was dealt to the cardinals prior to the 1969 season after another similar season for the braves in 1968.
1977 topps #350 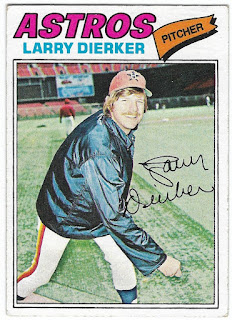 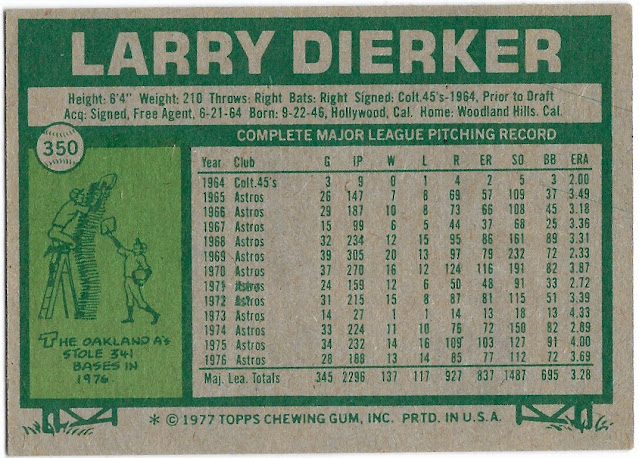 larry dierker was past his prime in 1976, and i have to believe that if topps was fully subscribing to the idea of hero numbers, they gave this one to dierker based on his no-hitter that he threw in july of '76 against the expos. otherwise, dierker was just another starter on a bad team. he spent 1977 with the cardinals after being traded for joe ferguson before the season began, and didn't pitch in the majors after that season ended.
1987 topps #350 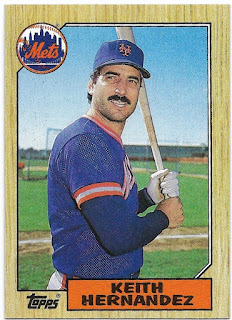 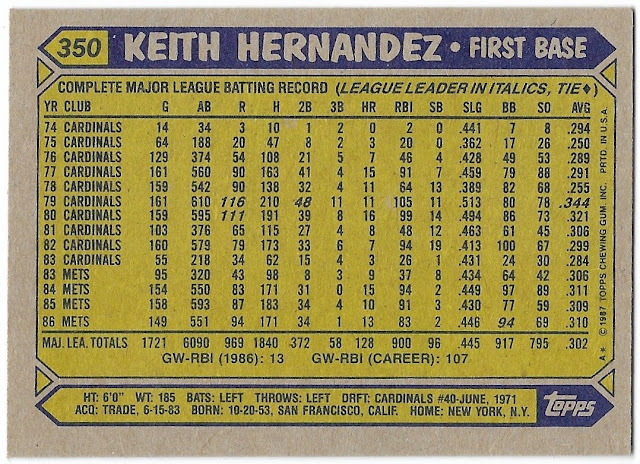 kieth hernandez was a reigning world champion when this card was issued, having helped the mets beat the red sox in seven games in the unforgettable 1986 fall classic. hernandez also supplanted steve garvey as the national league's starting first baseman that year, just as he had ended garvey's run of gold gloves almost a decade earlier. this card also had me thinking about #350 back when it came out. i used to look at the checklists that i pulled from packs to see who the hero numbers were each year, and seeing hernandez in this spot after jack clark was featured there in 1986 made me think that maybe there was a method to topps' checklist madness.
1997 topps #350 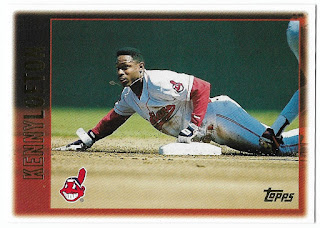 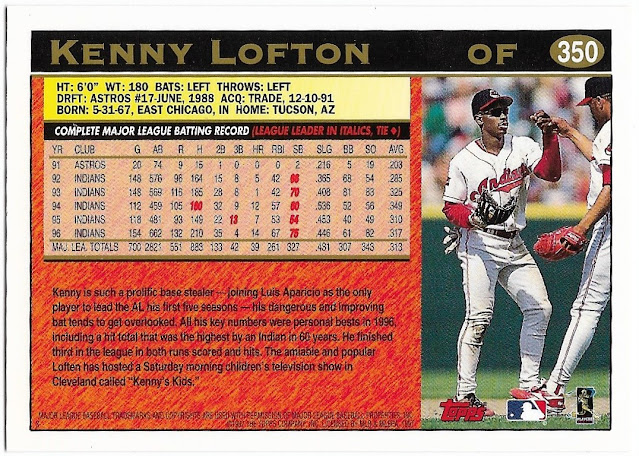 kenny lofton was at the peak of his game in 1996, as he set career highs in hits, runs, doubles, and stolen bases for cleveland. unfortunately, cleveland fell in the first round of the playoffs and lofton was traded to atlanta for the 1997 season. his former teammates wound up falling to the marlins in the 1997 fall classic, with his replacement in center field (marquis grissom) was the mvp of the alcs and hit .360 in the world series. lofton was back in cleveland, replacing grissom, for the 1998 season. it is worth mentioning here that lofton's card photo is very similar to the image on chuck carr's 1998 card that also held the 350 slot.
2007 topps #350 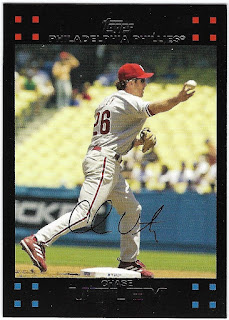 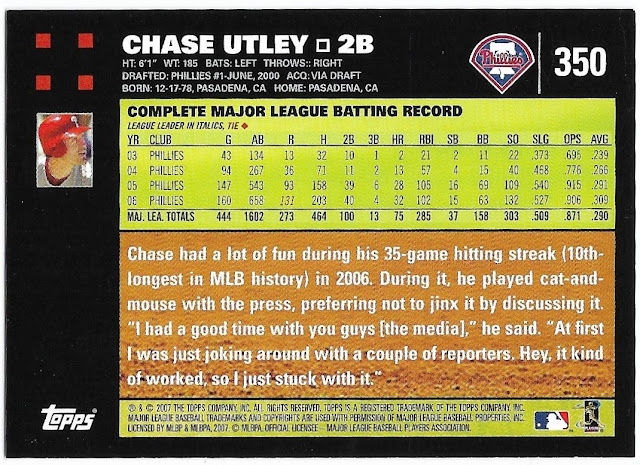 chase utley put up a career year in 2006 to earn number 350 in the 2007 set. in addition to the 35-game hitting streak mentioned on the back of his card, he had over 100 runs, 200 hits, 30 homers, 100 rbi, and a batting average over .300. that is professional hitting at its best. he was an all-star for the first time, although the phillies finished out of the playoff picture. in 2007, utley had another strong year and helped the phillies return to october baseball for the first time since the 1993 world series.
2017 topps #350 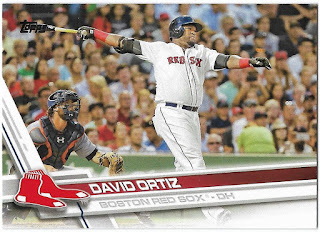 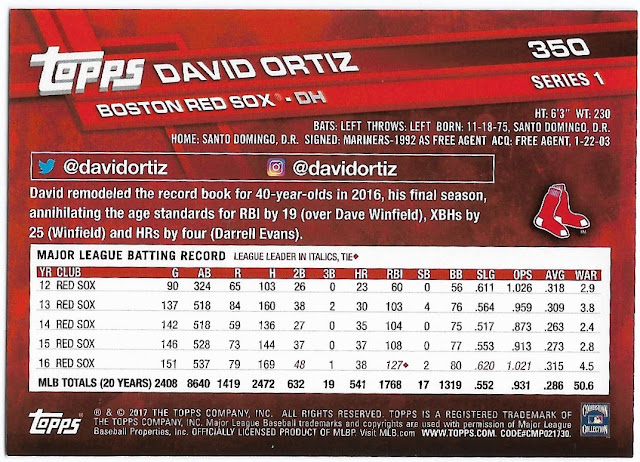