back in june of 2006, i made my way to denver to meet up with some friends and my dad to watch some baseball at coors field. it was a fun time and we enjoyed a couple of games featuring the dodgers and rockies. it was the first time i saw matt kemp, who was only about a week in to his big league career at the time, play in person.
last week, i returned to coors field for the first time since that weekend to see the defending world champion dodgers in person. it was the first time i had been back to a baseball stadium since august of 2019 and it was glorious. this time, my dad met up with my son and i for the first two games of the second half. the dodgers won both games we attended, and i got to see albert pujols play. when we planned the trip, we assumed that clayton kershaw would pitch one of the games, but he went on the injured list 10 days before the start of the second half. at least we saw julio urias and walker buehler and not a bullpen game.
the place, as well as downtown denver, was overrun by traveling dodger fans like us. for the first game, we sat several rows behind the dodger dugout which is where the largest dodger contingent typically sits. however, we were in the upper deck behind home plate the second night and there were just as many dodger fans there.
here's my "stub" from the first game 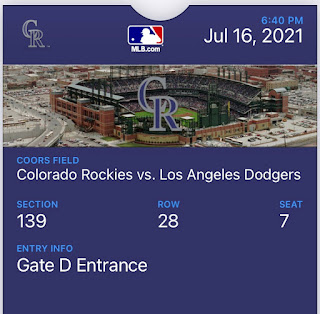 i took a few photos. here's the first pitch of the friday night game 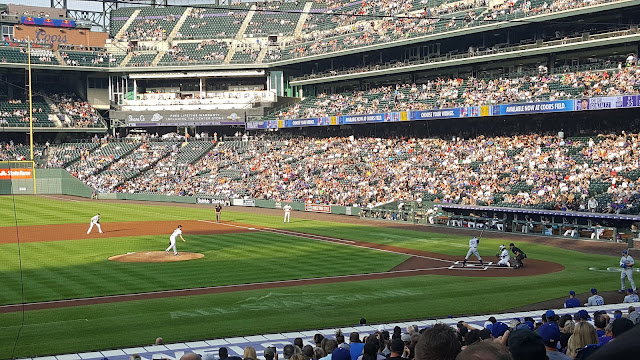 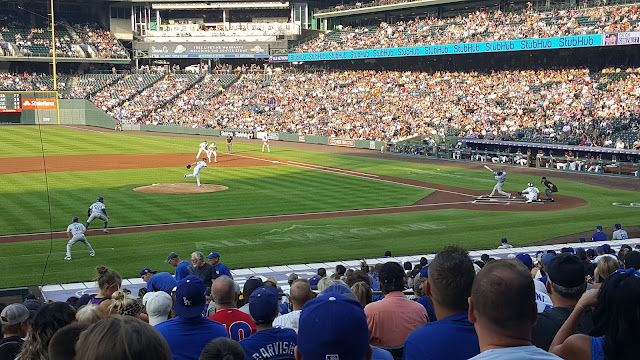 i knew in advance that dodger fans love albert pujols, aka tio berto, but it was awesome to experience the greeting he received from fans in person. here he is pinch hitting in the top of the ninth inning. 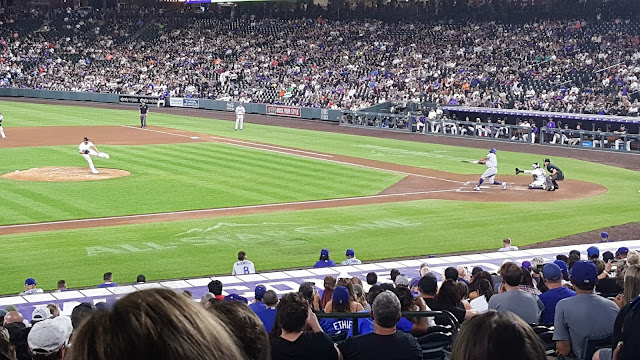 believe it or not, that was the first time i had seen pujols play in person. he recorded an infield single in this at bat which moved him past willie mays on the all-time mlb hit list. if you factor in mays' negro league career (as baseball reference does), pujols still trails him on the all-time leader board by a few hits. there was no notification in the ballpark about the milestone, but it was mentioned on mlb network or some other highlight show that i saw after returning from colorado. the stats on mlb.com do not reflect negro league stats, so i guess pujols is past mays now? baseball reference has long been my go-to for stats, and it is very confusing to have sources not match regarding counting stats. it would make sense that whomever mlb uses to compile statistics is the recognized authority, however, so it was cool to witness this event even though i didn't know what was happening at the time.
here's the first pitch from saturday's game 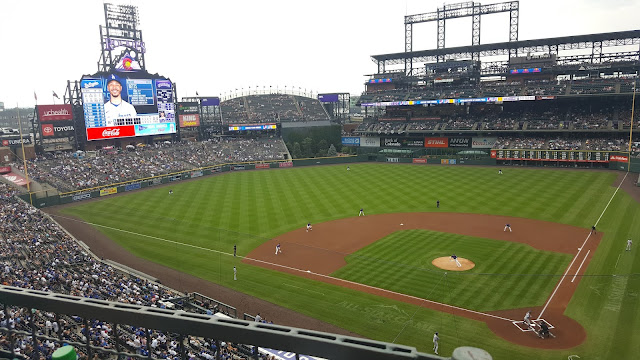 a different perspective. hard to see, but the retired numbers in coors field are located on the facade of the second level in right-center field. 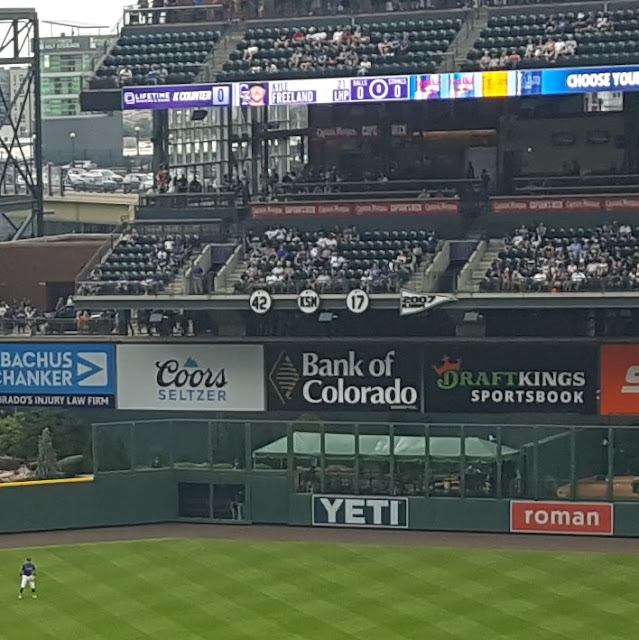 there's 42 for jackie robinson, the initials "ksm" for their late president keli mcgregor, and 17 for todd helton. larry walker's 33 is set to be retired later this season. i also give the rockies props for only posting their national league pennant and not any of their wildcard berths. i recall a team (maybe it was the rockies) adding a wild card pennant to their stadium back in the late 1990's.
later in this game, max muncy hit a couple of home runs and drove in 5 runs; a feat which topps felt warranted a card. i was surprised but thankful to have this card (it's on its way, anyway) 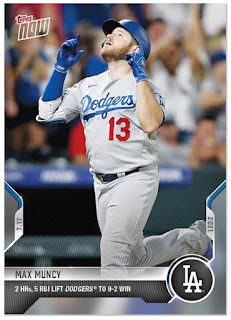 to add to my "cards from games i attended" mini-collection. here's the back: 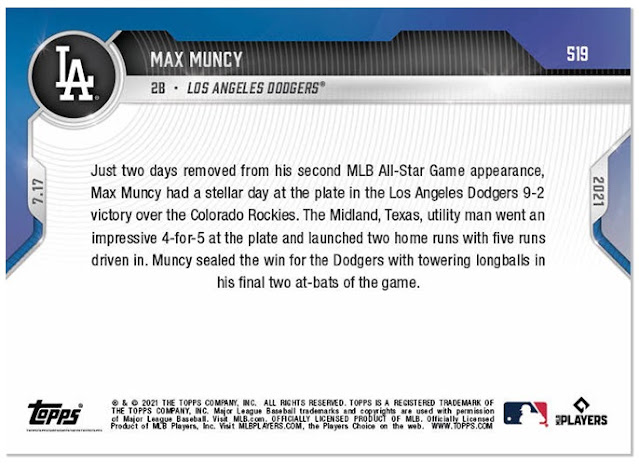 it wouldn't be a topps now card if it didn't have erroneous text. this time, it's the use of "two days" in the first sentence. this game took place on saturday, which is the fourth day after tuesday - the day that the all-star game was played.
speaking of mini-collections, here's the card that i keep in my "stadiums i've seen games in" mini-collection for coors field: 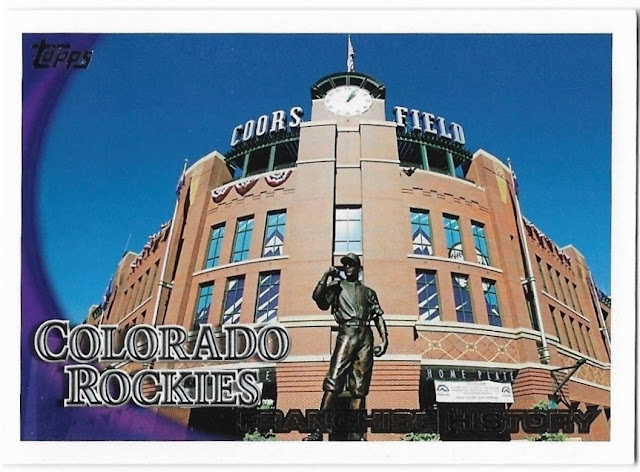 it's from 2010 topps, and it features the exterior of the stadium behind home plate along with the statue of "the player".
now here are a couple of photos from my first visit to coors field on june 5, 2006 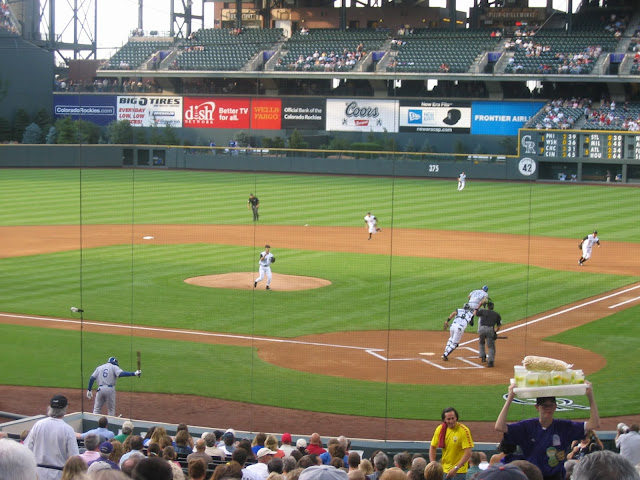 that's the aftermath of the first pitch of the game - rafael furcal bounced back to byung-hyun kim as kenny lofton waited on deck. here you can see jackie robinson's retired number placard in the frame in its original location on the rightfield wall.
here's a photo i took of the scoreboard when nomar garciaparra (at the time my favorite dodger) came to bat in the top of the 3rd 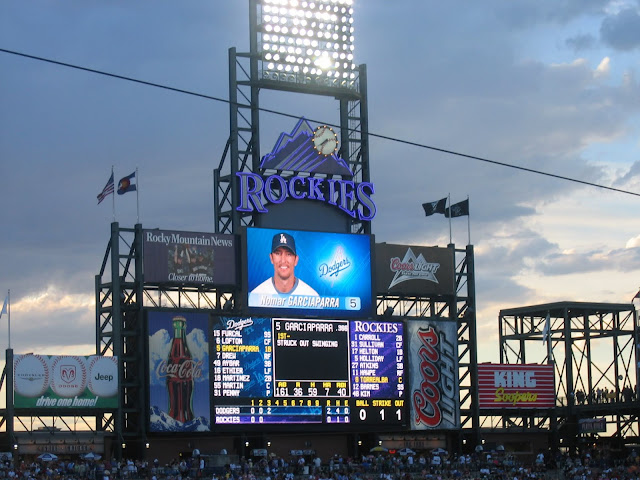 he struck out for the second time, but wound up going 2 for 5 in the game and raised his average to .370! i was pretty happy with his performance as a dodger up to that point to put things mildly.
finally, here's another pic of the scoreboard from the game the following evening 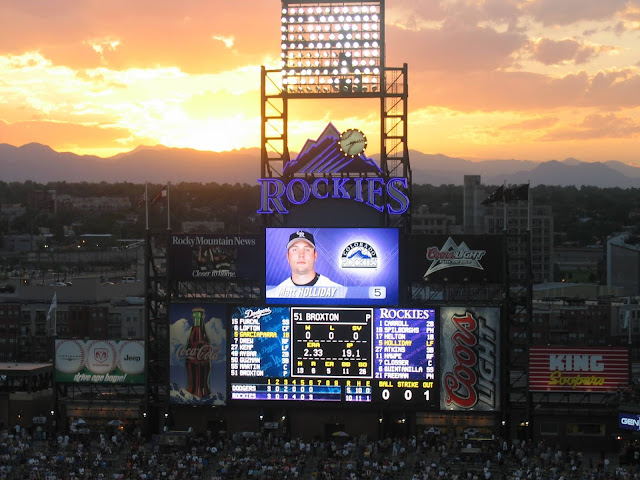 i was up in the purple row when i took this photo, so it is truly a mile-high image of a rocky mountain sunset.
coors field is a nice ballpark, and the atmosphere was electric for these games. unfortunately, the concessions in the upper level were severely lacking. long lines and missing menu items in the third inning - not a good impression. i find it hard to believe that they weren't prepared for large crowds for these games, especially since the first night there were no issues with concessions, although we were in the lower level for that game, and there are way more concession stands in that concourse. all in all, it was great to be in a ballpark again!
Posted by gcrl at 7:55 PM