here are some more subsets that i've collected (in addition to having these cards in my complete sets). i love baseball history, and so i enjoy these all-time leaders and all-star sets from some 1970's topps sets.
first up are the 1973 all-time leaders: 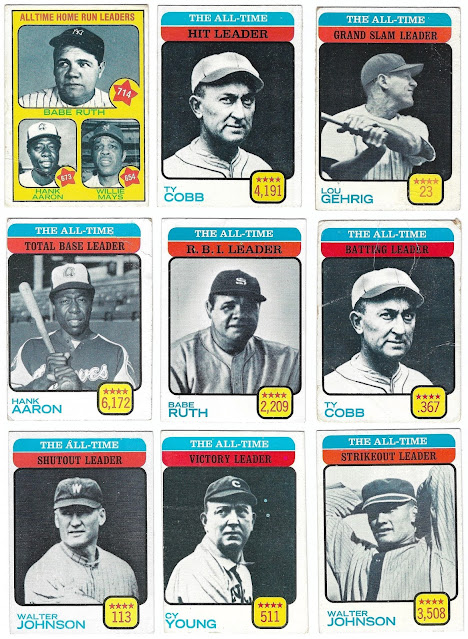 i have so many questions about these cards, and in particular the non-pitcher cards. some of the categories (grand slams and total bases) seem odd to me, and why did walter johnson get two different photos while ty cobb's image was re-used? why have one babe ruth image of him as a yankee and another from his barnstorming days? whatever the answers to these questions, i am thinking that topps wanted to take advantage of the imminent changing of the guard with respect to the all-time home run king and so decided to create this subset. i can only imagine how cool it must have been back then to open a pack and find a lou gehrig card!  here are the backs: 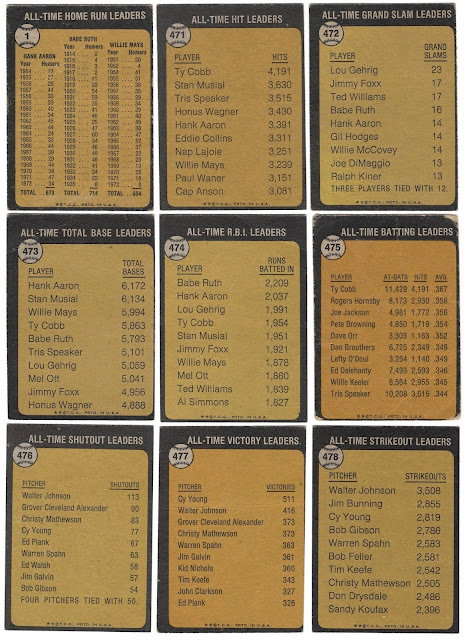 i appreciate willie mays being added to the home run leader card even though by then there was no chance he was going to pass babe ruth. i also like the yearly home run totals on the back of that card, but am thankful that topps did the backs differently on the other cards.
if this subset were to be done next year in heritage (and i hope it will be!), the home run card would feature barry bonds, aaron, and ruth. the hits card would feature pete rose (and that is the most likely reason that the subset (or at least that card) won't be made), and alex rodriguez would replace gehrig on the grand slams card.  aaron remains the all-time total bases leader, but ruth would give way to hammerin' hank on the rbi card. cobb would keep the batting card (although his average has dipped to .366), johnson would hold on to the shutout card, and cy young would obviously keep the wins card. nolan ryan would replace johnson on the strikeout card, however.  the card backs would have some updates as well - in particular the strikeouts card as johnson is no longer the only pitcher in history to record over 3,000 strikeouts.
three years after the all-time leaders, topps included a lineup of all-time all-stars in the 1976 set. it's not a bad group, with a hall of famer at each position, including both a right-handed and a left-handed pitcher: 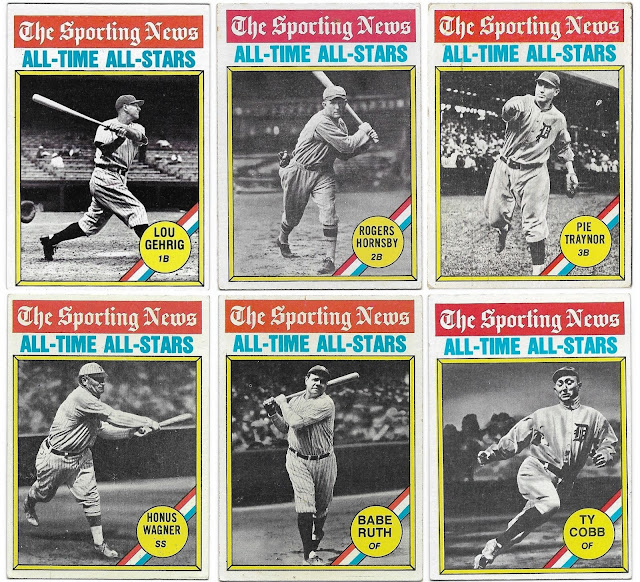 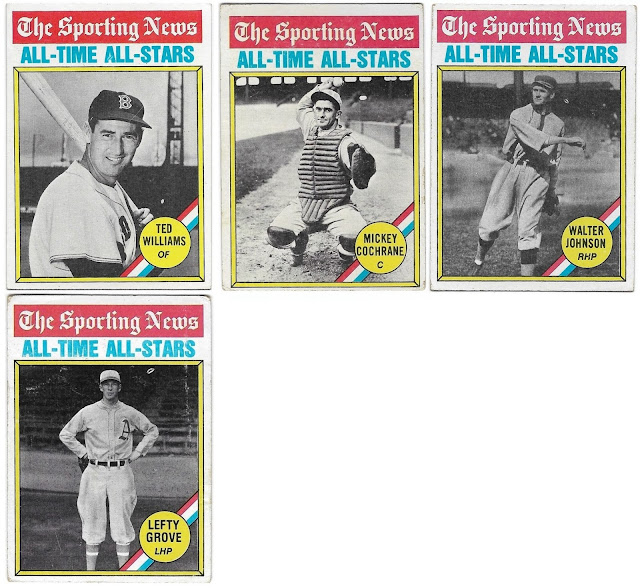 i don't know what the criteria was for these choices - perhaps the sporting news had done a ranking of players - but i think today there would be some changes made. one thing i appreciate about these cards is that they have full career stats on the back. for some of these players, seeing these cards meant i was seeing their full stats laid out for the first time.
the closest we've come to a reincarnation of the 1976 subset was in 1999 when upper deck released their century legends set (a personal favorite of mine). the set was based on rankings of players set by the sporting news. those rankings had willie mays ranked between babe ruth and ty cobb, so he would replace ted williams in the subset if it were to be printed today. lou gehrig, rogers hornsby, honus wagner, and walter johnson maintained their spots atop their positions in that ranking, but mike schmidt, johnny bench, and warren spahn overtook pie traynor, mickey cochrane, and lefty grove, respectively.
finally, we have the fantastic 1979 subset of all-time record holders. 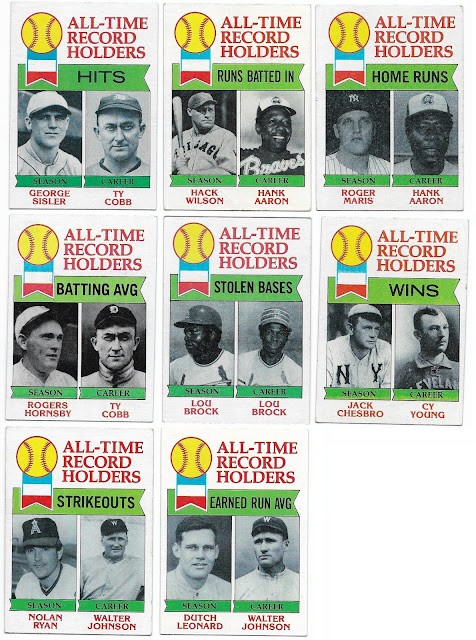 released just six years after the 1973 subset, these cards added season record holders to the players holding the career marks, and there was some variety in the statistical categories chosen as well. the backs listed many of the runners up, which was nice. 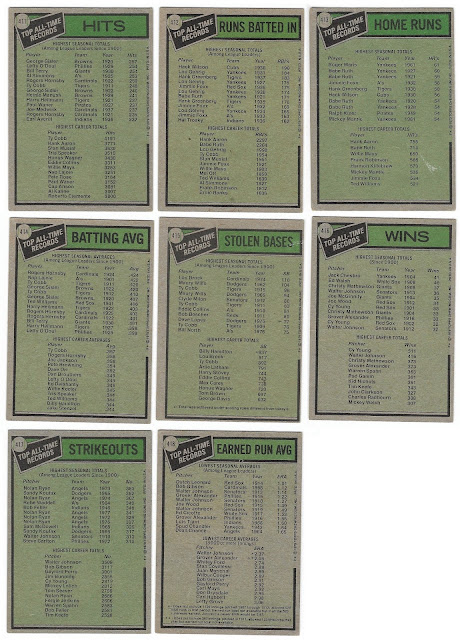 ty cobb and walter johnson are the only players to appear in each of these subsets, thanks to hank aaron passing babe ruth in 1974.  were this set to be redone today, there would be quite a few updates. the hits card would feature ichiro and pete rose instead of george sisler and ty cobb. the home run card would feature two photos of barry bonds, as would the stolen bases card feature two images of rickey henderson. on the strikeouts card, a second photo of nolan ryan would replace walter johnson, and the rbi, batting average, wins, and era cards would remain unchanged.
the 1979 cards were the first ones that i saw, and when i learned that topps had produced similar cards in 1973 and 1976, i looked forward to the 1982 set to see what sort of all-time cards might be in that set. there weren't any, unfortunately, and since then there have only been active leader cards (in 1984 and 2012) that even come close to these sorts of cards in flagship sets. maybe someday...
Posted by gcrl at 7:55 PM