my favorite cards of the year - 1997 edition

i recently introduced my mini collection focusing on my favorite cards from each year that i've been a collector. the basic gist is that i wanted to create a space for the cards that i most appreciated having in my collection in the year that they were released. these were cards that i acquired in the year that they were issued, and that i considered to be my favorites at the time. i have disallowed (most) cards that are already in other mini collections in order to avoid having a mini collection consisting of more steve garvey, double plays, and dodger stadium cards.
i moved to minnesota in the summer of 1997 and hauled most of my baseball card collection with me. i left most of my complete sets back at my parents' house, but brought my dodger and garvey collections, along with everything else with me. i was intrigued about the idea of moving to an american league town and the prospect of watching baseball indoors. i was still buying cards, although '97 was the first year that i bought the factory topps set rather than hand collating it myself.
favorite non-dodger card: upper deck charlie hayes 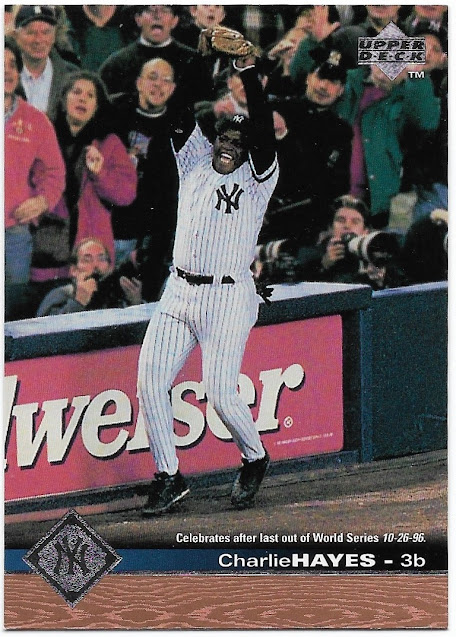 what if i told you that i was happy that the yankees won the 1996 world series? it's true, i was. i was a bit disappointed for buck showalter and don mattingly that they weren't around for it (i was not sad that their yankees lost to the mariners in the alds the previous year), but i was happy for charlie hayes (who definitely got happy) and john wetteland and jimmy key and darryl strawberry and tim raines and wade boggs and mike aldrete and mariano duncan and cecil fielder and bob watson, the yankee gm. this yankee team was sort of a rag-tag bunch featuring players i had followed throughout their careers or who had not had previous success, combined with some legitimate home grown talent in the likes of derek jeter, bernie williams, andy pettitte, and mariano rivera, and it was ok to like them as they were somewhat of an underdog.
they beat the favored braves, 4 games to 2, for their first title since 1978 when they also came from being down 2 games to none to defeat the dodgers and dash my early fandom hopes. it seemed to me that baseball was getting back to normal following the strike, with the yankees winning again. of course, i quickly stopped being ok with yankee championships once the brian cashman era began and they took full advantage of free agency and their ability to absorb bad contracts. disclaimer - while i root for the dodgers, i recognize that they took a turn in philosophy in 2012 with the trade with boston, and i am on record as saying they were no longer the dodgers i had followed all of my life after that. they rebounded a bit with developing home grown players and making smart acquisitions like justin turner and kiké hernandez, and max muncy, but have been back at it with the mookie betts trade that included david price and his big contract, and even the signing of trevor bauer has kind of a bad taste to it, in my opinion.
anyway, i loved the fact that 1997 upper deck dated the photos that were used for the cards, and i was excited to see hayes' excitement at catching the final out of the series memorialized on cardboard. kenny landreaux should have been so lucky.
favorite dodger card: bowman hideo nomo 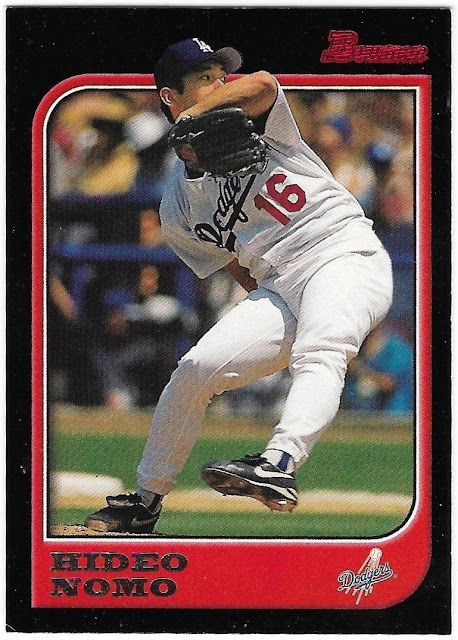 man those black borders with the red inset border looked sharp compared to the burlap-y 1996 bowman release. i found a couple of card shops after moving to minnesota that summer, and added this card to my collection as soon as i saw it. there is a chance that the photo comes from the dodgers' home opener in 1996 when nomo faced the braves and tom glavine in the sunshine at dodger stadium which would be awesome since that's a game i attended in person. unfortuately, there is no way for me to know for sure. regardless, i liked this card so much that i made sure it was in my header over at garveyceyrusselllopes eleven years after first acquiring it.
up next, 2010. stay tuned!
Posted by gcrl at 7:55 PM