introducing my favorite cards of the year mini collection, starting with my first year as a collector

one of the things i've been doing with my collection during the work from home months has been to attempt to fully separate keeper cards from non-keepers. i had things pretty well organized in that regard, but there were a few monster boxes that were in purgatory. i've been going through them and identifying cards to trade, sell, or keep.

the asterisk is there because, in order to avoid this collection just being a repeat of cards that are already in my player collections (mainly steve garvey) or other mini collections (dodger stadium, double plays, etc), i've disqualified some cards from being eligible. i will have two cards for each year - one non-dodger and one dodger.  i want to stress that this is not a revisionist history collection - these were the cards that i truly appreciated the year that they were released. as a result, they are mostly base cards and not inserts or other cards that were chased down later.

i will start things off with 1978, which was the first year that i collected cards. 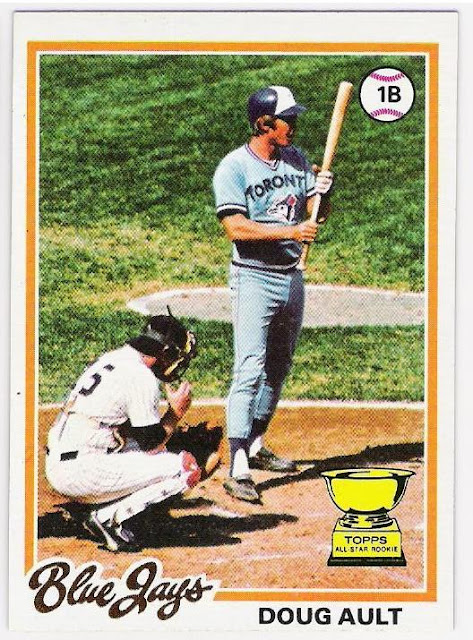 i, along with many others, have extolled the beauty of ault's card in the past. when i was 7 and first saw this card, i recognized that it was different from the other cards in the set. it was a rare in-game photo that was used, but there was no active action, unlike the nlcs and alcs cards, felix millan's card, roy white's card, and others.  the rookie cup and the green grass and the brown dirt really spoke to me. the angle of the photo was also different, as if it were taken from the stands - a photo that i (or more realistically at the time, my dad) would have taken.

it is likely that, had there not been an american league team in southern california at the time, doug ault would have been my first favorite non-dodger player largely due to this card. of course, the angels did exist, and we were in their broadcast area, so i followed the exploits of don baylor much more closely.

now when i look at this card, i also feel a sense of time. the card showcases a moment in between action that is a big part of baseball. ault with one foot out of the batter's box, and thurman munson adjusting his mask gives a portrait of activity that occurs in every game but is not often memorialized.  i love the entire 1978 topps set, and there are lots of great cards in there that i was happy to have, but the ault card stands out, and it is a perfect card to kick off this collection. 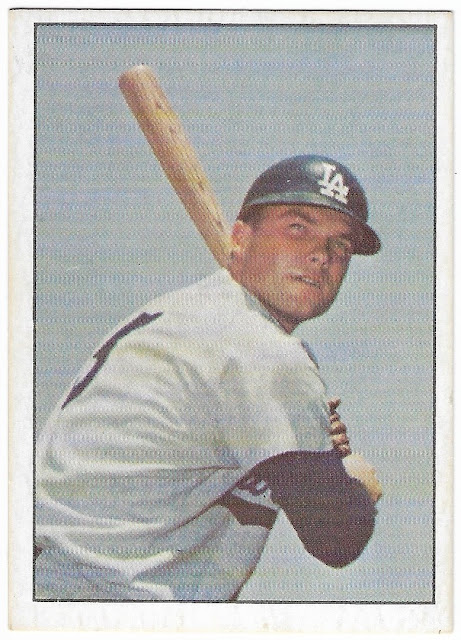 clearly, my favorite dodger card of 1978 was and is steve garvey's topps (or o-pee-chee) card. i already have a large number of those cards in various collections, and so, as mentioned up top, it was disqualified from consideration here. another card considered was ron cey's 1978 o-pee-chee card - a card which i used to have pinned up on my wall and later sent to him to be signed. that card means a lot to me, but it was already in my permanent collection.  the dodger team card and nlcs card were also front runners, but i decided to go with a different card that i was happy to have back then.  as a result, jim lefebvre gets the nod.

i purchased this card at my local lcs in 1978, and it was the first non-topps card that i owned. i was so happy to have this card, as i had learned that lefebvre was my dad's favorite player. he had a rawlings lefebvre model glove that he would use when we played catch (mine was a mike schmidt model). i also chose number 5 that year for my first little league jersey because of lefebvre (johnny oates was wearing that number for the dodgers at that time, but that was inconsequential). later on that season, lefebvre was back in a dodger uniform, as he replaced the late jim gilliam as the dodgers' first base coach for the world series that year. these days, my dad has more recollections of sandy koufax or don drysdale as his favorites, but that doesn't change my love of this card. in fact, i've still got my dad's old mitt, and i still have this card.

so there you have the first two cards inducted in to my "favorite* cards of the year" mini collection. i'll keep a running entry over at my want list site where i link to my other mini collections. i don't plan to go in chronological order with this series; in fact, the next year up will be the year 2000.