i was a little disappointed to learn that matt kemp did not make the usa olympic baseball team. he was one of the last players cut from the roster, which does include former dodgers tim federowicz, scott kazmir, and edwin jackson, along with mike scioscia as the team's skipper. their first game is tonight against israel!
the olympics would have been a nice way for kemp to leave the game, assuming he is ready to do so. he's not signed with anyone since he finished the 2020 season with the rockies, so i am assuming his big league career has ended.  if that is, in fact, the case, this 2021 topps heritage card 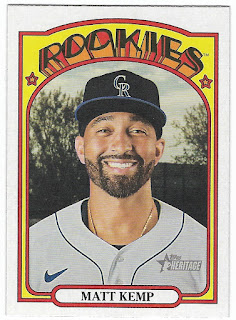 marks a final tribute to the bison.  here's the back: 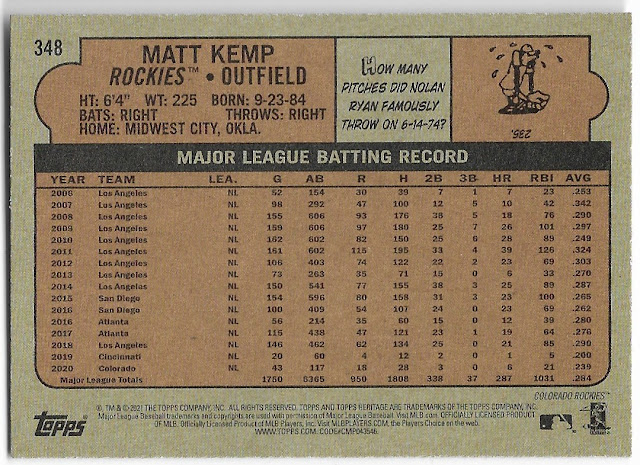 not a bad career. i added this card to my final tribute collection, but would have been happy not to had he signed with a team. i am guessing that the lack of a universal dh in 2021 was the final straw.
kemp was my reigning favorite non-dodger, and i figured before the season began that joc pederson would take over that title. i was wrong. once the season got going, i found that i was much more interested in the exploits of fernando tatis jr.
yes, he plays for the padres, but he's also been on my fantasy team since the start of the 2019 season, and there is no denying his talent and love for the game. i don't mind that he swings 3-0 and i don't mind that he flips his bat and i don't mind that he does other things that might be frowned upon by more old-school players. it all comes down to the fact that he is having fun being one of the most talented players on the field.  now, when manny machado does it, it seems like he is just being a dick. hypocritical, i know.
anyway, i have this 2021 topps 52 redux tatis jr card in my favorite non-dodgers of the year collection 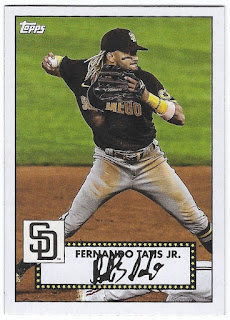 and i also put this 2021 topps flagship card 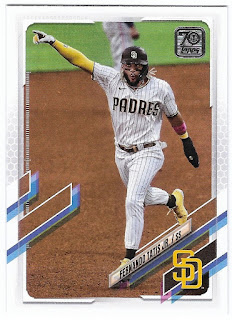 in my mini-collection featuring representative cards from each year of flagship from 1952 on. i suppose i should maybe switch it out for a shohei ohtani card, but i probably won't.
Posted by gcrl at 7:55 PM