my favorite cards of the year - 1984 edition

i recently introduced my mini collection focusing on my favorite cards from each year that i've been a collector. the basic gist is that i wanted to create a space for the cards that i most appreciated having in my collection in the year that they were released. these were cards that i acquired in the year that they were issued, and that i considered to be my favorites at the time. i have disallowed (most) cards that are already in other mini collections in order to avoid having a mini collection consisting of more steve garvey, double plays, and dodger stadium cards.
my friends and i were more excited about the donruss set in 1984 than the fleer or topps sets for the first time ever. all three sets had the hottest rookies - mattingly and strawberry - but donruss had the rated rookies. of course, they had included rated rookies in their 1983 set, but put the designations on the back where noone paid it any mind. in 1984, they put the designation on the front with a nice design and had those cards at the front of the set. as excitied as we were about those cards, however, my favorites from back then were not rated rookies, although they both come from the "postmark" set.
favorite non-dodger card: donruss living legends a (carl yastrzemski and johnny bench) 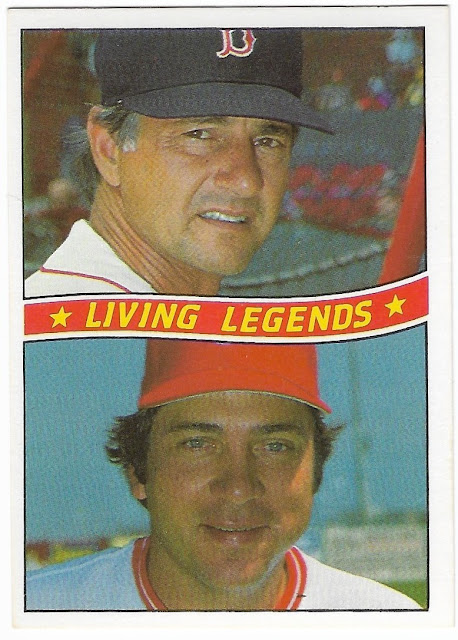 i think i've mentioned before that when my dad and i would open packs together, he made me put the cards in number order as we went along, or at least in stacks of cards by number - one stack for cards numbered 1-99, another for cards 100-199, and so on. i remember finding this card in a pack and turning it over to see where it belonged and being dumbstruck by the "a" numbering. the card didn't show up on the checklist and we were confused. we later found the other living legends card of gaylord perry and rollie fingers and saw it was numbered "b" and so we kept looking for "c". well, there was no card "c" but i was happy to have this card that featured two all-time greats who ended their careers with the 1983 season. i was disappointed that they didn't get regular final tribute cards in the set, but that disappointment was offset by the new concept of "inserts".
favorite dodger card: donruss duke snider 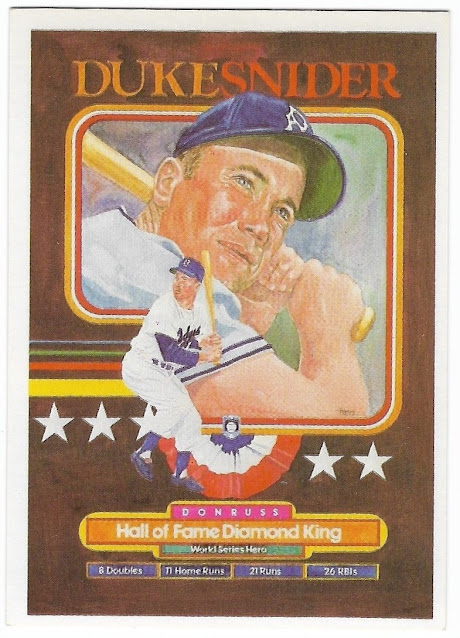 the first donruss puzzle was from their 1982 set, and featured babe ruth. the next year, it was ty cobb. i wasn't sure who to expect in 1984, but i sure wasn't thinking of duke snider! i thought it was great that a dodger would be the third subject chosen, and so i immediately hoped for a double of this card so i could have one for the team collection (we were set builders then, first and foremost). luckily, i found a duplicate and not even sid fernandez's rated rookie designation could knock this duke snider card off of my favorite dodger card pedestal. of course, it helped that fernandez was a met by the time i saw his rated rookie card, but still.
up next, 2005. stay tuned!
Posted by gcrl at 7:55 PM