my favorite cards of the year - 1989 edition

i recently introduced my mini collection focusing on my favorite cards from each year that i've been a collector. the basic gist is that i wanted to create a space for the cards that i most appreciated having in my collection in the year that they were released. these were cards that i acquired in the year that they were issued, and that i considered to be my favorites at the time. i have disallowed (most) cards that are already in other mini collections in order to avoid having a mini collection consisting of more steve garvey, double plays, and dodger stadium cards.
in 1989, i was living in orange county attending college. i didn't purchase many cards - only a box of topps from one of the local card shops. i don't know if i even knew about upper deck, to be honest. as a result, i didn't see a lot of cards that year, but i still had some clear favorites.
favorite non-dodger card: topps robin ventura 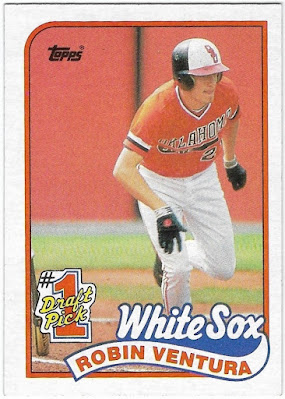 robin ventura was a guy that i was aware of before he went to oklahoma state. living where i did, his baseball (and basketball) talents were on display in the local newspapers in the early and mid-1980's. he was three years ahead of me in babe ruth, so i missed out on playing against him by one year. our high schools were in different leagues, so they didn't play against each other, and even if they had, i was on jv during ventura's last year of high school.
ventura went to oklahoma state to play baseball, and we followed his exploits from afar. we even watched some of one of his 1987 games that took place late in his 58-game consecutive game hitting streak in a class somehow. there was hope amongst me and my friends that the dodgers would draft ventura in 1988 (they certainly did need a third baseman), but they passed on him (for bill bene) and he was selected a few picks later by the white sox. the next year, in 1989, this card was in a pack of cards from the box i purchased. it was exciting to see, even though it wasn't a dodger card, and gave me hope that he would make it, which he certainly did.
favorite dodger card: topps don sutton box bottom 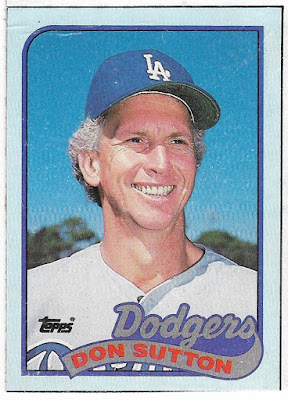 i didn't realize it until i opened a pack and saw the dodger team checklist on the back of tom lasorda's card that don sutton was not included in the 1989 topps set. luckily, the card shop that sold me the box had a bag of box bottom panels on display behind the register. i asked who was on the bottom of topps boxes this year, and the guy showed me the bottom of a couple of boxes. i quickly chose the one that had sutton's smiling face showing. i am glad i did, because while i assumed that there would be a final tribute for him included as part of the regular set,  it was not to be - this card celebrating his 750th career start was as close as topps would get me (thank goodness for score!).
up next, 2001. stay tuned!
Posted by gcrl at 7:55 PM