my favorite cards of the year - 2017 edition

i recently introduced my mini collection focusing on my favorite cards from each year that i've been a collector. the basic gist is that i wanted to create a space for the cards that i most appreciated having in my collection in the year that they were released. these were cards that i acquired in the year that they were issued, and that i considered to be my favorites at the time. i have disallowed (most) cards that are already in other mini collections in order to avoid having a mini collection consisting of more steve garvey, double plays, and dodger stadium cards.
favorite non-dodger card: topps stadium club jameson taillon 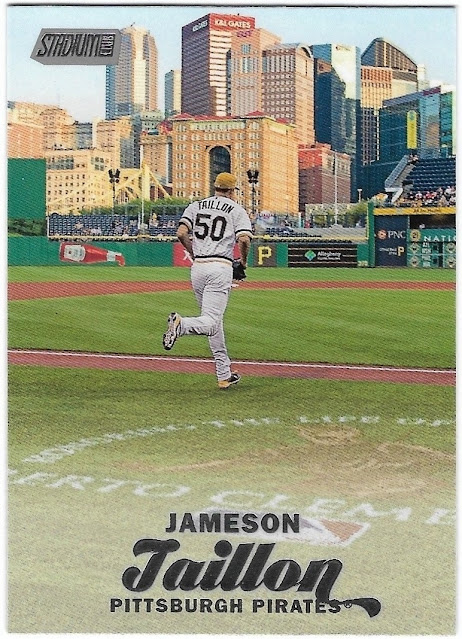 fitting that this card is posted tonight when mlb is celebrating roberto clemente day. you can see the painted grass in the foreground of this card referencing a tribute to clemente, and of course, clemente's number 21 is visible on the right field scoreboard. i've not been to pnc park yet, but cards like this push it to the top of the list of stadiums to visit.
favorite dodger card: topps update sandy koufax variation 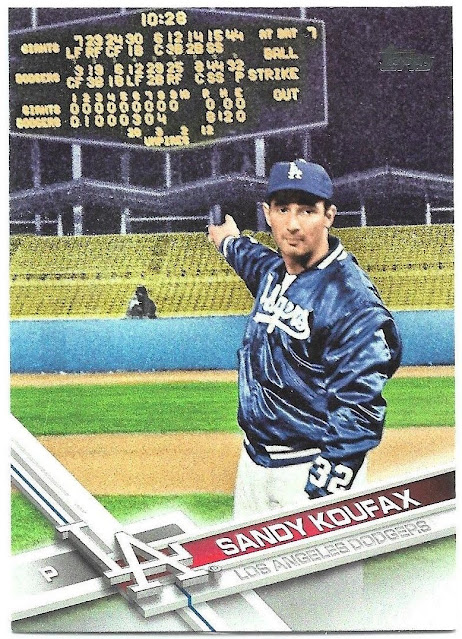 sure, the colorization is not the best, but this card that featured a new koufax image on cardboard celebrating his second no-hitter was such a surprise and became an instant favorite. using a photo from may of 1963 means that this is one of the earliest (if not the earliest) dodger stadium photo to wind up on a baseball card. the scoreboard shows the line score of koufax's second no-hitter which came against willie mays and the giants. an 8th inning walk ended the perfect game, and koufax issued another walk in the 9th. thanks to a double play in the 8th, he only faced one over the minimum. harvey kuenn made the last out, and two years later kuenn would again make the last out in a koufax no-hitter, although that would be a perfect game. anyway, i really liked this card and anointed it my favorite card of the year.
today, i think i prefer one of the runners up a bit more - that would be the 2017 topps dodger team card 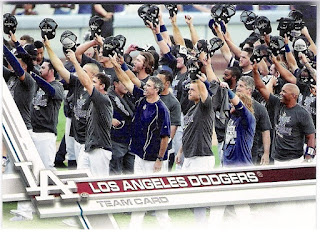 which shows the team saluting vin scully after their division clinching, walk-off win in the final home game of the season. however, these posts and this collection are about the real-time favorites, so koufax remains.
up next, 1999. stay tuned!
Posted by gcrl at 7:55 PM