the cardinals took a one-two punch last fall, losing hall of famers lou brock and bob gibson within the span of a month back in 2020. brock passed away on september 6, and gibson died on october 2 (the day the cardinals played their last game of the season). the timing of their deaths allowed for the club to add a memorial patch for brock for the remainder of the season, but not for gibson - that would wait until 2021.
even though the team wore the lou brock patch for just a short time, there are cards that show the patch. the first one i found was paul goldschmidt's 2021 topps heritage in action card: 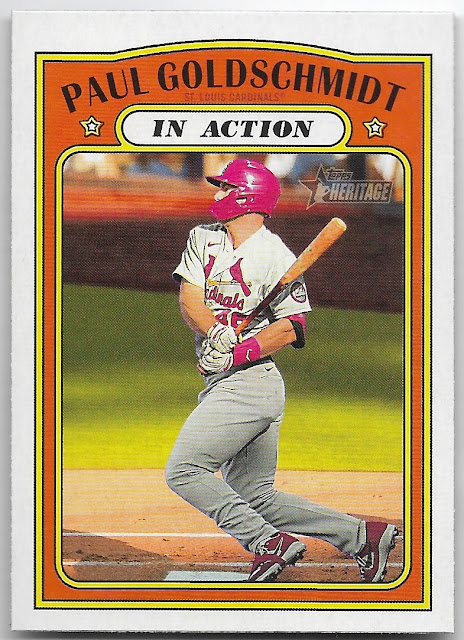 which shows the gray version of the patch. this 2021 topps series 2 cardinals team card 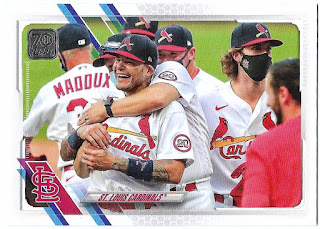 shows the white version pretty clearly. according to the hall of fame's website, there is also a cream version, but i've not seen that featured on any cards.
this season, the team has been wearing a similar patch for gibson. i went ahead and bought some 2021 topps now cards that featured the patch in its various colors. nolan arenado has cards showing the white 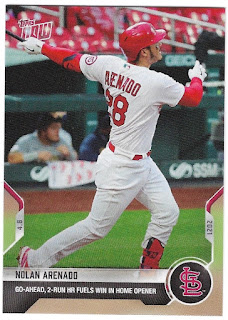 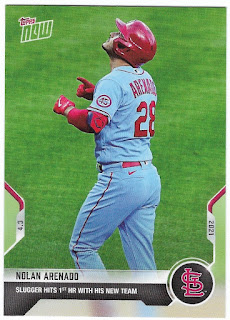 versions, while i added this dylan carlson card 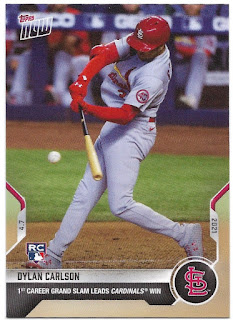 for the gray. again, the cards are wearing their cream uniforms on some occasions so maybe there will be one more card for me to add to my collection.
the cardinals seem to have adopted a template for their hall of famer memorial patches in recent years, as each of the patches worn for stan musial and red schoendienst match this design, while they've used a simpler motif for players like oscar taveras. as always, i appreciate the recognition that teams give to their former players and staff when adding a patch or armband to the uniform.
bonus content! i recently added a card to my collection that i had wanted for a while. 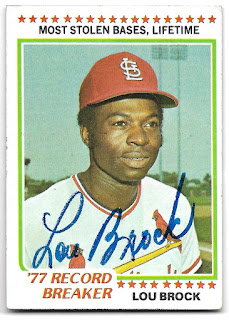 that's a 1978 topps lou brock signed card. it's card #1 in the very first set that i collected. with it, i feel fairly complete in my efforts to obtain signed 1978 topps cards. never say never, but i don't really plan to send out any more ttm requests or shop for signed cards from the set.
Posted by gcrl at 7:55 PM