my favorite cards of the year - 2006 edition

i recently introduced my mini collection focusing on my favorite cards from each year that i've been a collector. the basic gist is that i wanted to create a space for the cards that i most appreciated having in my collection in the year that they were released. these were cards that i acquired in the year that they were issued, and that i considered to be my favorites at the time. i have disallowed (most) cards that are already in other mini collections in order to avoid having a mini collection consisting of more steve garvey, double plays, and dodger stadium cards.
in 2006 i was having fun following the dodgers. jim tracy was out, and the kids were coming up. i was excited about russell martin, andre ethier, james loney, and matt kemp - each of whom debuted that season. i was even excited about seeing uber prospect joel guzman get the call to the majors, and he did in june of that year. mostly, i was excited about seeing nomar in dodger blue, but we'll get to that in a bit.
favorite non-dodger card: upper deck mark grudzielanek 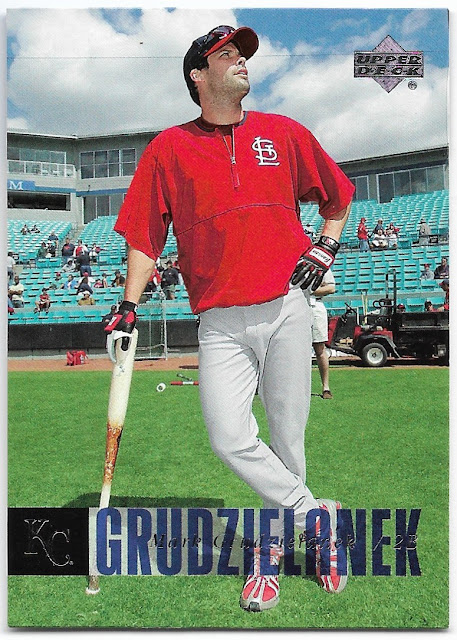 what first struck me about this card was the color. the red pullover and the teal seats and the green grass and the white clouds combine for a nice looking card. plus, there's a bunch of stuff going on in the background. the duffle bag, pitching screen, bat weight, fungo, guy in shorts and loafers, and the field cart make this card worthy of the 1973 topps set.  and then there is what i noticed next: that grudzielanek, who is shown as a cardinal, was listed as a member of the royals. all that was missing was some good old o-pee-chee "now with" text. i soon noticed other cards in packs that i bought that were like this - doug mientkiewicz and rafael furcal were two of the first i saw - and i considered completing the full set just so that i would have all of these o-pee-chee like cards. in the end, i didn't quite make it, but i kept grudzielanek and mientkiewicz plus all of the dodgers.
favorite dodger card: topps update & highlights nomar garciaparra 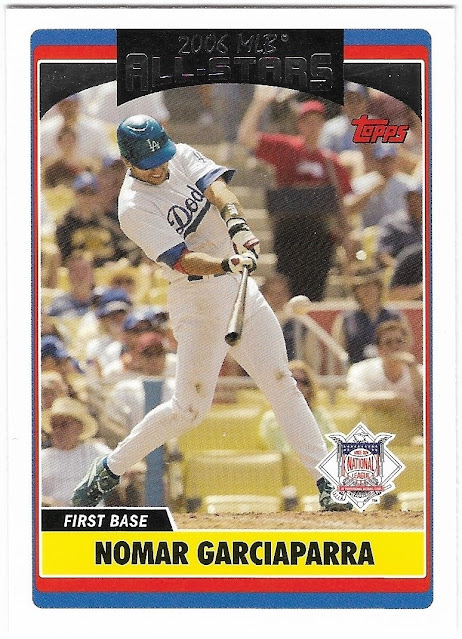 while i appreciated topps' efforts to photoshop nomar in to a dodger uniform in the opening day and factory team set releases, i really wanted an honest to goodness nomar dodger card to add to my topps flagship/update team sets that i had been curating in real time since 1978. when update was released, i was happy to see this card, although i was a bit confused as to why there wasn't just a normal card for garciaparra. this turned out to be his last topps card which disappointed me given that he was a favorite of mine.
up next - 2015. stay tuned!
Posted by gcrl at 7:55 PM