tomorrow marrks the 10th anniversary of vladimir guerrero's final big league game. it doesn't really seem that long ago to me, but time waits for no man.
i've been fortunate to receive some vladdy cards for my pc in recent months, especially since i've pretty much stopped seeking them out. i did add this one to my collection sometime last year 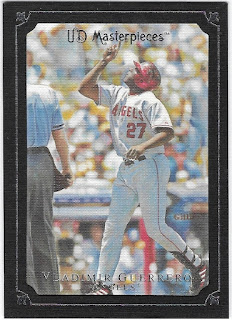 it's a 2007 upper deck masterpieces green linen parallel (yes, it's green). i added it to a sportlots order to max out the shipping value.  i also added a couple copies of his 1998 fleer sports illustrated card 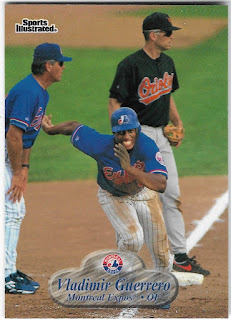 one for the pc and one for my lurker collection thanks to cal ripken jr manning third base.  the expo coach sort of looks like old friend jim lefebvre but i don't think he was ever an expo coach. most likely it's pete mackanin.  anyway, seeing these cards arrive reminded me that i hadn't yet posted the vladdy cards that i keep in my "favorite non-dodger of the year" collection.
from 2006 through 2007, i considered guerrero to be my favorite non-dodger. he replaced nomar garciaparra who became a dodger, and then was replaced by joe mauer who was much easier to follow given he played for the nearby twins.  i had been a guerrero fan since the 1990's, and remained a fan until he retired, even though he was my "favorite" for just a short time.  here are the cards in my aforementioned collection:
2006: topps national baseball card day 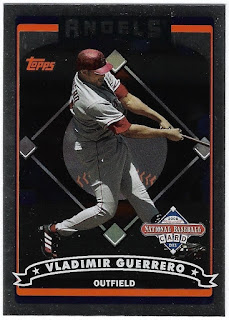 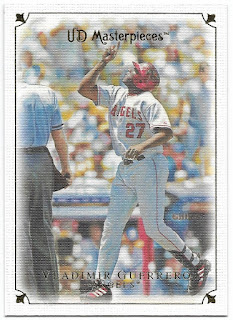 while guerrero last played with the orioles in 2011, he did sign a minor league deal with the blue jays in 2012. i wish that he had been called up because he ended his career just shy of some nice round numbers - he had 449 homers, 2590 hits, and 1496 rbi. no matter; he didn't need any more homers, hits, or rbi to be enshrined in cooperstown. now that i think of it, he's only the second of my favorite non-dodgers to get the call from the hall - paul molitor is the other.
it was fun following vladdy's career, and i hope he is enjoying his retirement.
Posted by gcrl at 7:55 PM