tommy lasorda would have been 94 today had he not passed away this past january. as he was the manager of the team of my youth, i have an interest in his cards, and i've been targeting them specifically in these days where it is more and more difficult to be a complete team collector.  as a result, i've added a couple of lasorda cards to my collection this year.
first up is a relic card from 2018 panini national treasures 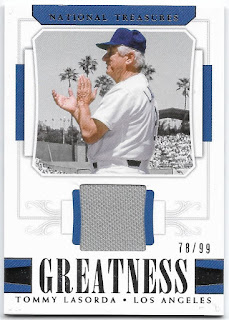 it's from the "greatness" insert set, and the base version is numbered to 99. the silver holo version 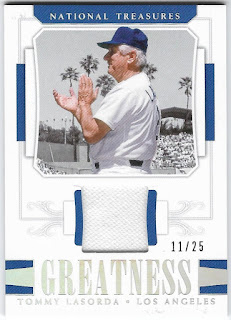 is numbered to 25. i paid about the same for each of these, so scarcity doesn't seem to matter. i also bought another of the /99 version to put in my dodger stadium collection as the card offers a nice view of the dodger bullpen and left field pavilion, not to mention the three sisters palm trees.
here's another card of tommy in dodger stadium that i added earlier this year - a 2020 bowman heritage cavan biggio card 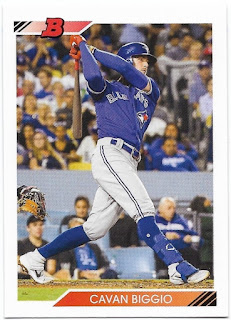 you can see tommy in the background sitting in his seat next to the camera well on the home plate side of the dodger dugout. tommy was a mainstay in that seat for many years now - i believe since the current ownership group took over. i don't think he sat down there during the mccourt years. anyway, he has shown up on a few cards as a result which is always a treat.
i also added this 2017 panini donruss mike trout card 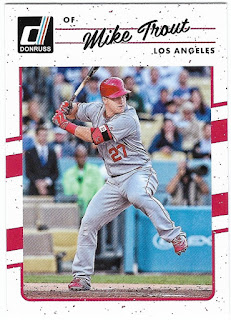 to my dodger stadium collection. you can see that lasorda is not in his seat, and you will also notice that there were further renovations done after 2016 to convert those seats to blue.
after tommy's death, the team placed flowers in his seat 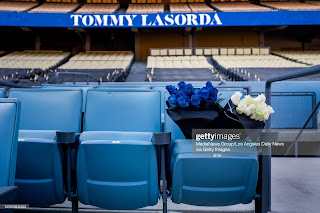 tommy will continue to be missed - he definitely had a great run, and i am sure he is hanging out with the big dodger in the sky!
Posted by gcrl at 7:55 PM