my favorite cards of the year - 1999 edition

i recently introduced my mini collection focusing on my favorite cards from each year that i've been a collector. the basic gist is that i wanted to create a space for the cards that i most appreciated having in my collection in the year that they were released. these were cards that i acquired in the year that they were issued, and that i considered to be my favorites at the time. i have disallowed (most) cards that are already in other mini collections in order to avoid having a mini collection consisting of more steve garvey, double plays, and dodger stadium cards.
in 1999 i was feeling a bit separated from baseball. i was busy at work, we were building a house, and i wasn't fully engaged with the twins. i did go on a roadtrip with some friends to see the dodgers in st. louis which was nice, and i made it to the metrodome a few times, but paul molitor who had been my favorite non-dodger had retired, and the dodgers themselves were underachieving. as for my collecting, i considering stopping that year, and i likely would have if not for one particular set. it's no surprise, then, that that set contributed the two cards which were my favorites that year.
favorite non-dodger card: upper deck century legends ty cobb 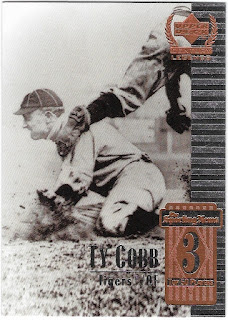 in december of 1979, just less than 20 years before this set was released, my uncle gave me the book "the image of their greatness". it was an important moment in my fandom as it really got me interested in the history of the game and the players who excelled in those early decades. ty cobb, who was already a favorite thanks to his appearance on the 1979 topps all-time hits leaders card, was catapulted in to my favorite "oldtimer" status as a result. of course, the book didn't go in to a lot of detail about cobb's negative traits which might have made me think otherwise.
anyway, when i learned of this set, i could not wait to get my hands on it. i bought a box and more packs and singles until i completed the set and the basic insert sets, too. seeing ty cobb's card in one of the first packs i opened was exciting for me given the photo that was used and the intensity with which he played. up until then, i believe all of the cobb cards i owned featured posed photos that didn't do him justice.
favorite dodger card: upper deck century legends mike piazza 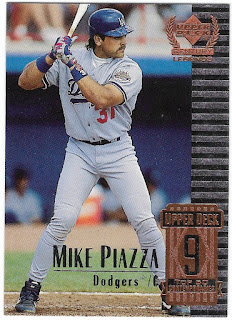 i was confused and annoyed when the dodgers traded piazza to the marlins in 1998. i made it a point to return to southern california to see him make his non-dodger debut at dodger stadium. i stood and applauded for him when he came to bat and again when he homered. i remained a fan, but ultimately i cheer for the name on the front of the uniform, so i moved on and hoped for the best from jim eisenreich, bobby bonilla, and gary sheffield. when i first saw this card i was so appreciative of having one last dodger card of the catcher formerly known as the strongest man in socal. of course, i had no way of knowing that there would be hundreds more dodger cards of piazza issued over the next couple of decades, so i figured this was perhaps the last. i quickly made sure i had two more copies to feed the set build, the team collection, and my mike piazza player collection. i also made sure to include it in my header for my first blog, garvey cey russell lopes.
up next, 2006 - stay tuned!
Posted by gcrl at 7:55 PM