it's been over a year since i acquired this card 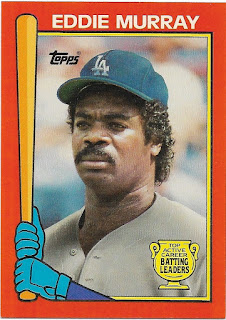 but this post kept getting delayed for one reason or another. not today.
the card is a fairly elusive piece of cardboard that comes from the 1989 version of the active batting leaders topps put in hanger/blister packs back then.  there's also a green version from 1990 that i wrote about here. in that post i mentioned that it would probably take some time for me to track down the 1989 card. i was wrong.
i was actually pretty close to pulling the trigger on a sealed version 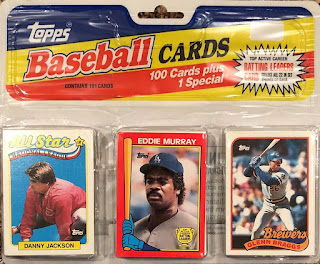 that would have also given me 100 1989 topps base cards for use as kindling or what have you. fortunately, i checked on sportlots and found a very reasonably priced murray card for sale. here's the back 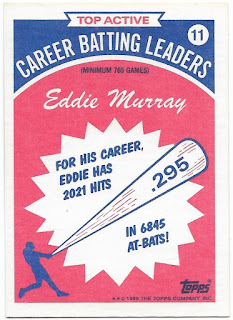 which provides pretty much all you need to know about what makes a player one of the active batting leaders.  murray, of course, went on to pass the 3,000 hit milestone but saw his average dip to .287. murray's .295 average at the time of this card would put him 12th among active players today - right behind albert pujols (whose average is in decline) and just ahead of freddie freeman.
that made me wonder - can you guess who the 10 active players are who have a better career batting average than pujols? i certainly would not have been able to do so.
Posted by gcrl at 7:55 PM