my favorite cards of the year - 1979 edition

i recently introduced my mini collection focusing on my favorite cards from each year that i've been a collector. the basic gist is that i wanted to create a space for the cards that i most appreciated having in my collection in the year that they were released. these were cards that i acquired in the year that they were issued, and that i considered to be my favorites at the time. i have disallowed (most) cards that are already in other mini collections in order to avoid having a mini collection consisting of more steve garvey, double plays, and dodger stadium cards.
1979 was my second year of collecting, and i fully expected the topps set to use the 1978 topps football design. i had transitioned from baseball to football in the fall of '78, but couldn't wait to open new packs of baseball cards. i was surprised at the design when the cards were released, but happy with the contents.
favorite non-dodger card: topps hits all-time record holders george sisler and ty cobb 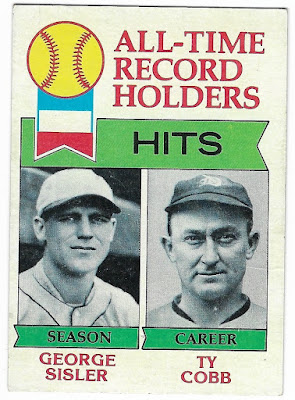 being a steve garvey fan from the start, hits were an important stat to me. when i found this card in a pack of cards in the spring of 1979, i was first excited to have a ty cobb card, but i was more interested in turning the card over to see if garvey showed up under the season hit leaders. alas, his career high of 210 hits in 1975 didn't come close to making the list as the lowest hit total featured was earl averill with 232 hits in 1936. after i saw that garvey wasn't listed, i immediately took note of roberto clemente having exactly 3000 hits, and i recall being thankful that he reached the milestone before his untimely passing.
favorite dodger card: topps bob welch 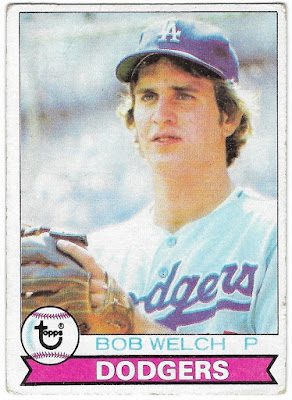 welch cemented his status as a dodger hero in game 2 of the 1978 world series when he struck out reggie jackson to end the game and give the dodgers a two games to none lead in the fall classic. and, although they dropped the next four games to the bronx bombers, welch's star was untarnished in my eyes. finding that he had his own card in the 1979 topps set was a great surprise, and it was definitely my favorite dodger card from that year.
up next, 1998. stay tuned!
Posted by gcrl at 7:55 PM