number, number on the wall

i've seen regular season major league baseball games in 22 different stadiums, although that total includes both the hubert h humphrey metrodome and target field in minneapolis. so, there are nine stadiums that i have yet to visit to have seen each major league team in their home whites. one of the things that i like to do at each stadium is look for the retired jersey numbers.
i first noticed them on telecasts from candlestick park, and have been intrigued ever since. unfortunately, i've only been to candlestick for football. still, i've seen my fair share of retired basseball numbers across the country. i usually try to take a photo, but i am not always successful in that regard.
sometimes, these retired numbers show up on baseball cards, and i at one time considered having a mini-collection of such appearances. as it is, i decided to keep dave bergman's 1983 topps card in my "favorite card of the year" mini-collection, and i keep sightings of jackie robinson's retired number 42 (like at the oakland coliseum and featured on this 2019 topps heritage denard span card) 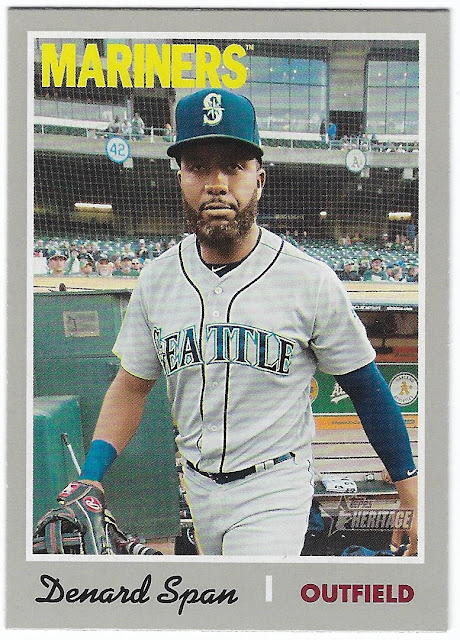 in my "42" mini-collection.
the other retired number i look(ed) for on cards was steve garvey's number 6, retired by the padres since 1988. believe it or not, i've had some success!
this 1992 mother's padres card of jose melendez 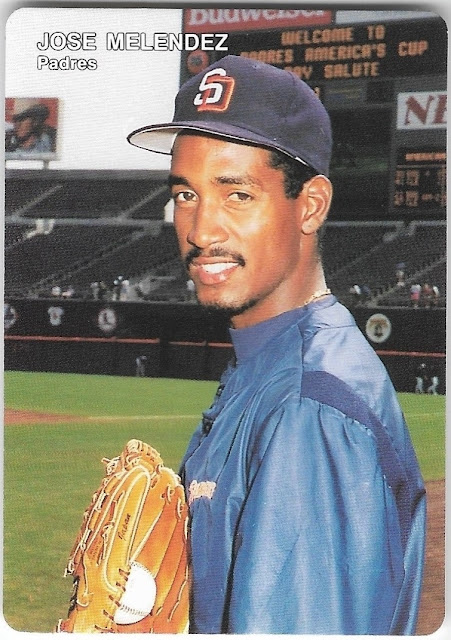 features the right field stands and scoreboard in the background. if you look behind the fence and towards the left edge of the card, you will see a placard to the left of the st. louis cardinals logo - that's garvey's jersey marker. i believe it was placed in the location that his walk-off home run in the 1984 nlcs cleared the fence.
it shows up again on this 1993 mother's padres craig shipley card 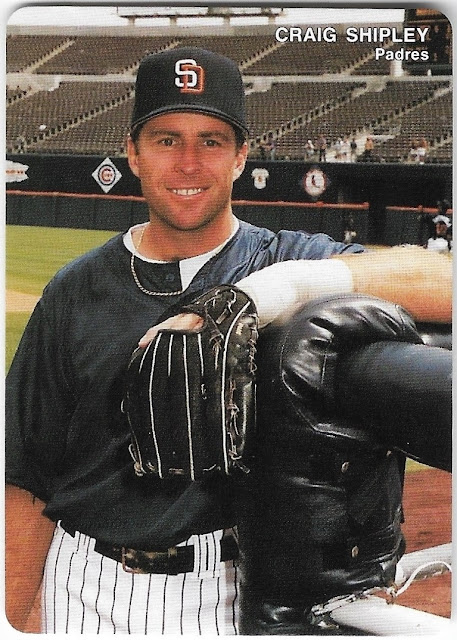 just next to shipley's left ear.
it is also featured (although very blurrily) on tim teufel's 1993 topps stadium club card 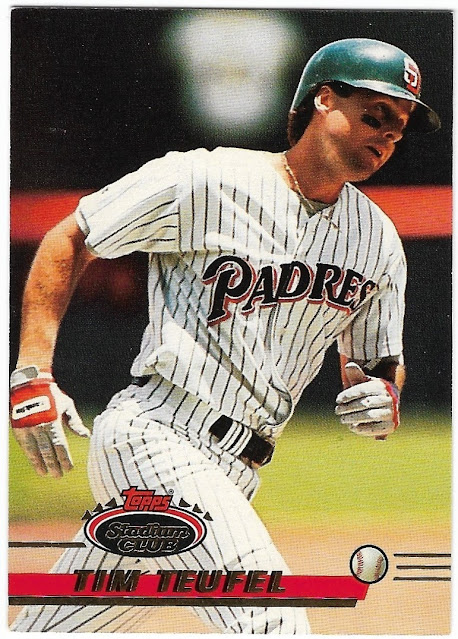 like i said, blurry.
i found a photo from getty images that features a slightly different take on the placard 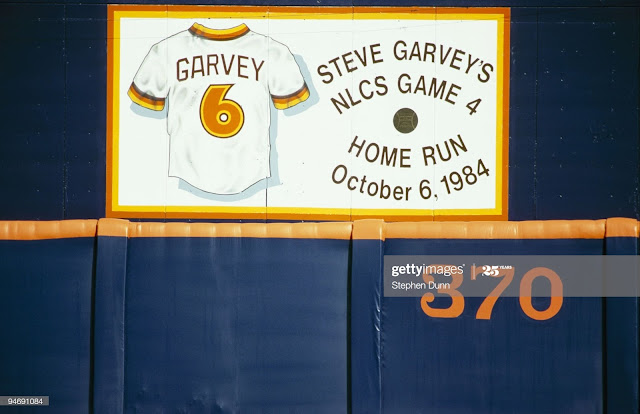 this photo was taken on opening day 1993, but if you look at archi cianfrocco's 1994 upper deck card, 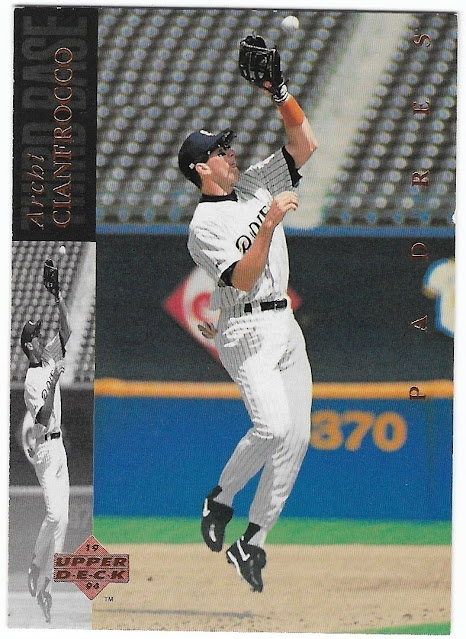 we see half of garvey's jersey posted in a similar fashion to the pre-1993 configuration. as a result, i would assume that the photo on cianfrocco's card is from prior to 1993, except that he didn't play for the pads prior to 1993. of course, he wasn't with them on opening day (he was with the expos), so perhaps the padres removed the rectangular placard and put the old one up at some point during the season.
a different configuration of garvey's retired number shows up on trevor hoffman's 1997 upper deck collector's choice card: 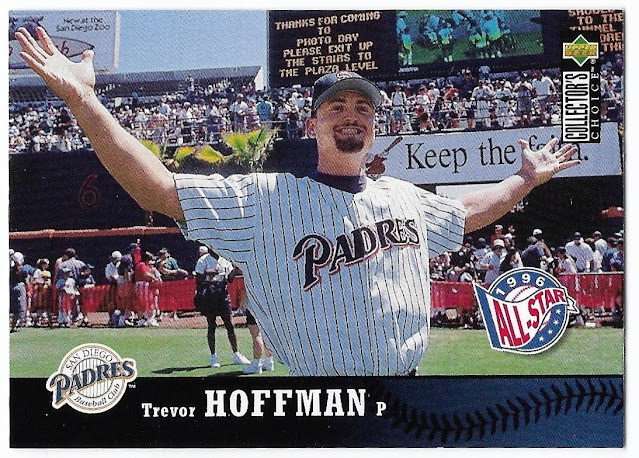 it's kind of hard to see - here's an altered image of the card: 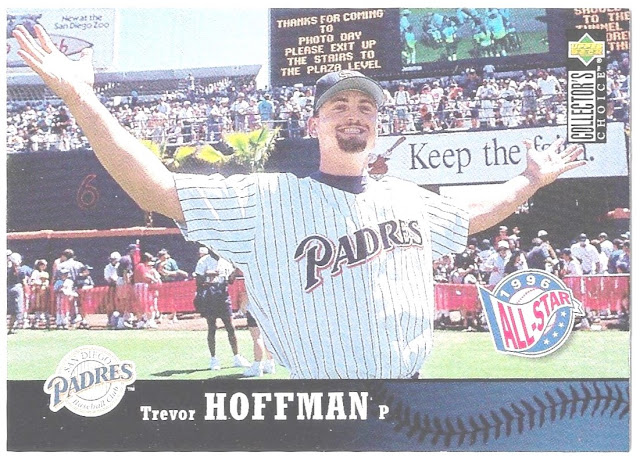 now you can see it next to hoffman's right forearm.
here's a photo i took at jack murphy/qualcomm stadium in 2002, with all of the padre numbers on display: 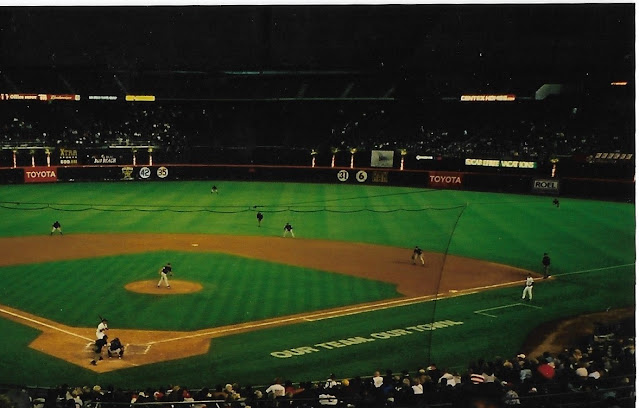 garvey's number is still in right-center, although it moved closer to centerfield. it's next to dave winfield's 31, and on the other side of center is randy jones' 35 and jackie's 42. ray kroc's "rak" is to the right of garvey's 6 as well. i've not seen any cards with this version of garvey's (or jackie's) numbers in the background.  by the way, this is the last game that i attended in san diego (it was the rockies against the pads on may 27, 2002), but i hope to get there soon to take in a game at petco park.
i have this 1994 score card 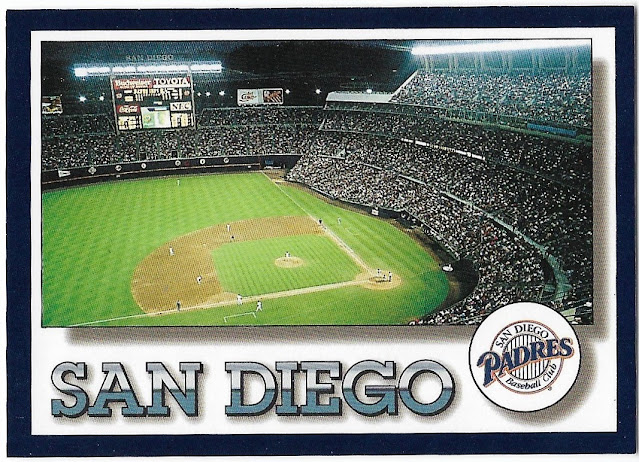 in my collection representing the murph in my "stadiums i've seen games in" mini-collection. i don't see garvey's jersey on this card, unfortunately.
Posted by gcrl at 7:55 PM