in thinking about what's next for my collection, i was toying with the idea of another mini-collection. this one was borne out of my old sampler sets that i've whittled down to just one representative card for each topps flagship set.  as i was selecting those cards and writing about them, i thought about collecting the same number from each year's flagship checklist. i recognize that this is not a new idea - there is perhaps most notably the number 5 type collection, and angels in order collects (collected?) card number 444 from any and all sets. i am sure there are other examples.
at any rate, i had three ideas as to how i would approach this. the first was card number 272. 272 is the number of career home runs hit by steve garvey. i dismissed that pretty quickly as i figured it would net me a bunch of commons which wouldn't be that interesting to see grouped together, even though it would allow me to include sets dating back to 1952 (other than 1954 and 1955) without getting in to the high number set.
the next idea was card number 350. i chose this number because garvey's 1978 topps card is number 350 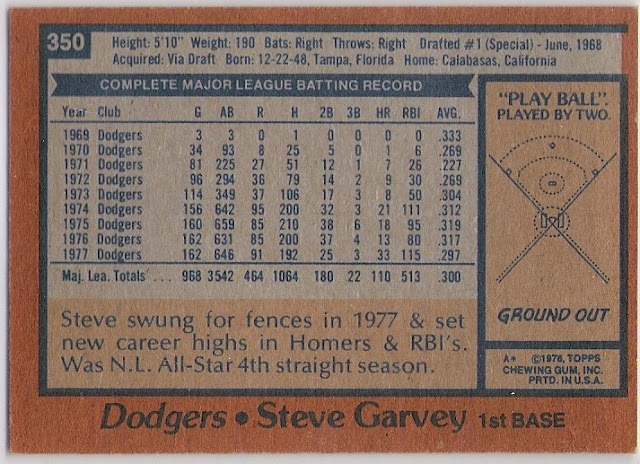 in that set.  this is a hero number, and would mean that i would be looking for a couple of mickey mantle cards, plus roberto clemente and other big name players along with some stars of their day, and some other variety with a playoff recap card or two from the early 2000's. this approach would mean that the collection would start with the 1957 set.
the third idea was card number 190. this is garvey's card number in the 1978 o-pee-chee set, 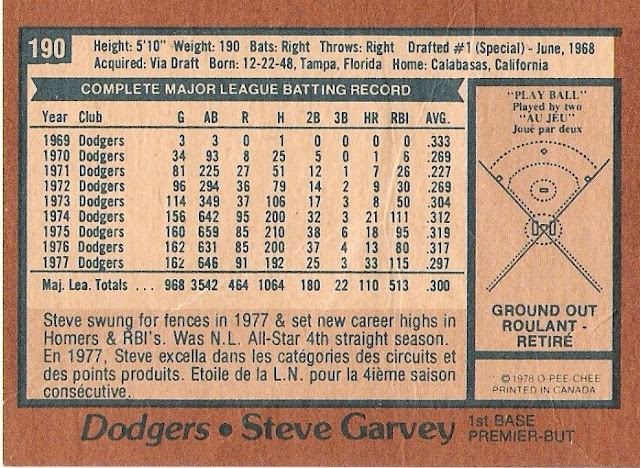 and would mean that i would have a different card (specifically john candelaria's) representing the 1978 topps set in this collection. this is a semi-star number, although there would still be a willie mays card to track down, and there would be a little variety with a 1975 topps mvp card. plus, all flagship sets would be represented. the down side is that there would be some commons thrown in as well.
i suppose the fourth option would be to discard the idea and not bother with another mini-collection.
i am curious if anyone has considered such a collection recently or in the past? i guess i am also curious as to which of the three options - 190, 350, or just call it good - that you would choose if you were in my shoes. i already know what i am going to do, but i am interested in hearing your opinions!
Posted by gcrl at 7:55 PM