this card is aces

many of my recent posts have mentioned my old 'sampler sets' that saw me adding at least one card for every team, design, and subset found in topps flagship sets from 1952 through 1969 and from 1971 through 1977, as i had already completed the entire 1970 set. the samplers were abandoned when i got serious about my dodger team sets from the 50's and 60's as well as completing the full 1965 (done!), 1957 (in progress), and all of the 70's (done) sets.
the 1967 topps set included 20 different teams, manager cards, league leaders, checklists, world series cards, topps all-star rookies, rookie stars, team cards, and combo cards. while i had multiple cards from many of those subsets, i only had one combo card, and it was this 'atlanta aces' card: 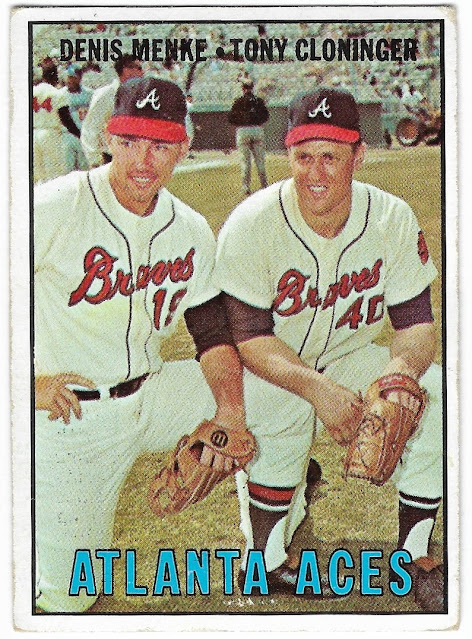 i always found this card strange because i had assumed that these guys were the braves' pitching aces, but only one of them (tony cloninger) was a pitcher - the other (denis menke) was an infielder and certainly not their best offensive player. the back of the card (not shown) notes that menke is one of their 'steadiest performers', while it specifically refers to cloninger as the ace of the staff. it also notes that cloninger hit 2 grand slams in a game during the 1966 season.
i recall when i first saw this card i thought that cloninger was sitting, but it turns out he's just resting his right arm on menke's left knee. not quite suttoning, as it were. that's not the only interesting thing about the photo, however.
bo from baseball cards come to life recently emailed to me his living list of cards featuring cameos (lurkers, i call them) of other players. as i was reviewing the list against mine, i saw that this card was identified as having a hank aaron cameo. now, i already had the 1962 topps 'mangers dream' card that features hammerin' hank in the background (along with dodger john roseboro and yankee elston howard), but i am always up for adding another card featuring the hammer to my collection.
as i mentioned above, i already had this card, so i fished it out of my monster box where much of my sampler sets went to live after i removed them from the binders that had stored them previously.  sure enough, there was number 44 in the background!  i then did one of those cartoon quadruple takes as i realized that hank was talking to a dodger!
here's an enlarged detail of the lurking players 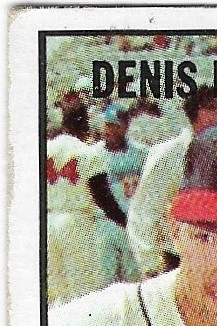 i know, that doesn't really help, but it is clear that it's a dodger, and my guess would be that it is tommy davis. i know i am not giving the tractor that is in the opposite upper corner its due, but you can understand my enthusiasm for hank aaron and the dodgers' back-to-back batting champion allowing me to add this card to my lurker collection, can't you?
thanks for letting me know about this (and all the others) bo!
Posted by gcrl at 7:55 PM