maybe someone at topps is looking out for me

i posted a month ago about the game i attended on april 16, 1983 which just happened to be the game in which steve garvey passed billy williams to set the all-time national league consecutive games played record. a few hours before that post was published, i saw that topps had made that feat the subject of their daily topps now turn back the clock set. to say i was pleased would be an understatement.
up to that point i had already purchased a half dozen or so 2021 topps now cards, but they had all been from a seller on ebay at half the cost of what topps charged. for this card, i decided to purchase directly from topps. the reason being that i needed two of the cards - one for the garvey collection and one for the cards featuring games i've attended mini-collection - and i figured that i could buy a group of five cards at a reduced rate and maybe sell the other three to try to break even.  of course, there was also the thought that maybe, just maybe, i would wind up with one of the two low-numbered parallels that topps randomly inserts in to orders in place of one of the cards.
my cards showed up just over a week ago, so i was able to add this card 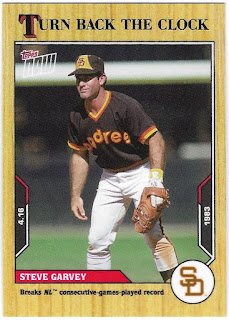 to my two collections. it doesn't feature a photo from the actual game in which garvey set the record, but that's ok.  here's the back: 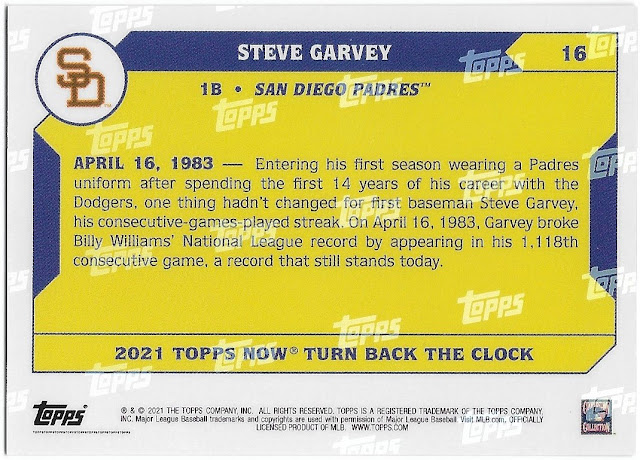 the text is silent on the fact that the record was broken in front of many of his dodger fans, but that's ok, too. what is better than ok is that this was one of the five cards i received: 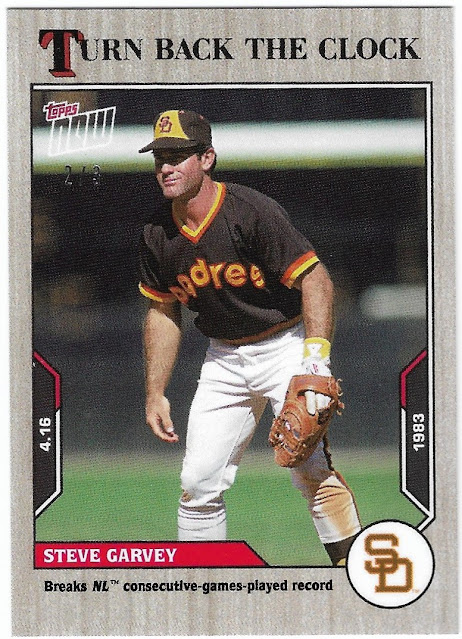 that is the "white ash" parallel version, numbered to 3. this is just simply an incredible get for a player collector, and i am pretty happy about it. the other parallel version is the "cherry" version, numbered to 7. the print run of the "base" card was 405, which as expected, is on the lower end of these issues. that fact certainly helped my chances of obtaining one of the parallels, but i'd like to think that maybe someone at topps was looking out for me.
Posted by gcrl at 7:55 PM