that which we call pee wee; by any other name would cause confusion

apologies to the bard.
i bring to you tonight, among other things, this 1958 topps pee wee reese card 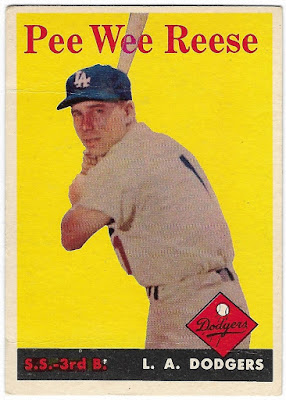 now reese's real name is harold. harold henry reese, if we are being formal. keep that in mind as you look at the back of this card: 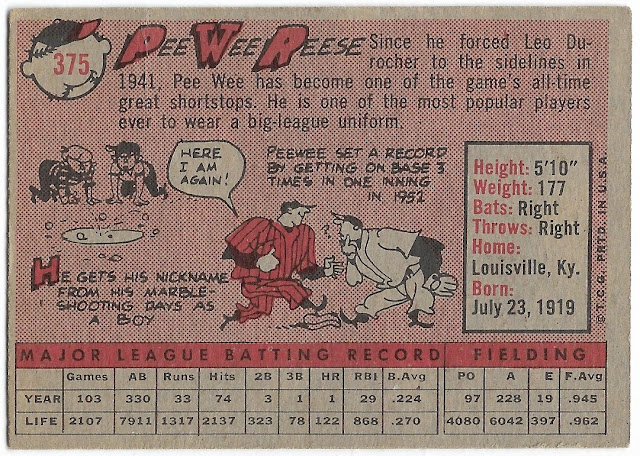 the first time i ever saw this card, the cartoon on the left confused me. it says that reese got his nickname "from his marble-shooting days as a boy". i was left wondering how "pee wee" was derived from marbles, but i thought maybe there was a "pee wee" competition or a brand of marbles or something like that. the only other nickname for reese that i was aware of was "little colonel" which doesn't seem to have anything to do with marbles at all.
then a couple of years ago, i was reading joe garagiola's book "baseball is a funny game" 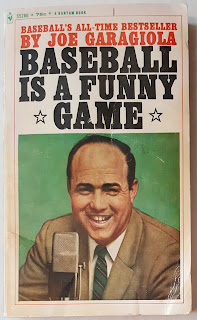 and in a section wherein he discusses nicknames of the 1950's, he notes that reese's nickname is actually "the champ". 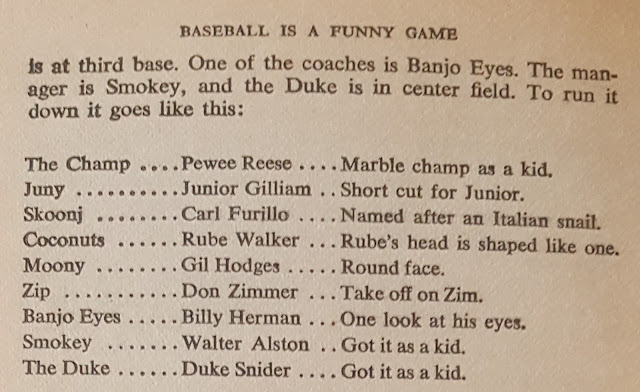 while joe can't spell, he does reference marbles! mystery solved. now it is possible that this information was included in roger kahn's classic "the boys of summer" but if so the information didn't register between the time i read the book and first saw the back of pee wee's card. other nicknames garagiola notes in the book that you won't find on baseball reference include lee walls (captain midnight) and bill virdon (cyclops). both of those had to do with their glasses that they wore.
the pee wee card up top (and all the other cards you will see in this post) came my way from thorzul - now at death stare cards - as part of a vintage collection team break he hosted. it was an upgrade for my team collection, as were a number of cards that i received. cases in point:
1959 topps don zimmer 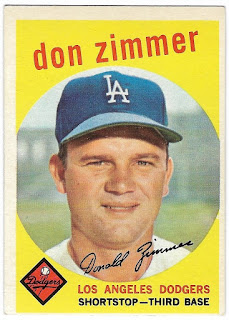 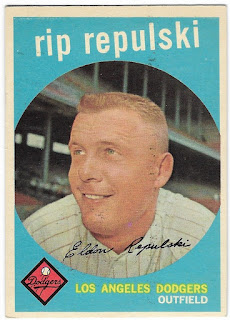 rip here was a good ol' minnesota boy whose real name was eldon. joe doesn't say, but i assume repulski was known as rip as a take on his last name. he also has one of the few non-yellow dodger cards in the 1959 set. maybe because he's a phillie in the photo.
1960 fleer joe medwick 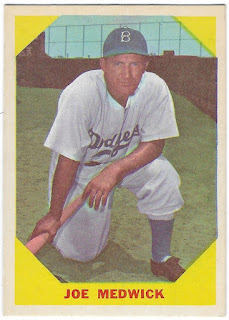 i am sure that joe g. would want you to know that medwick's nickname was "ducky"
1960 topps frank howard 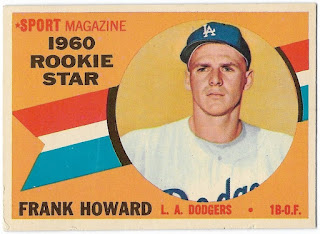 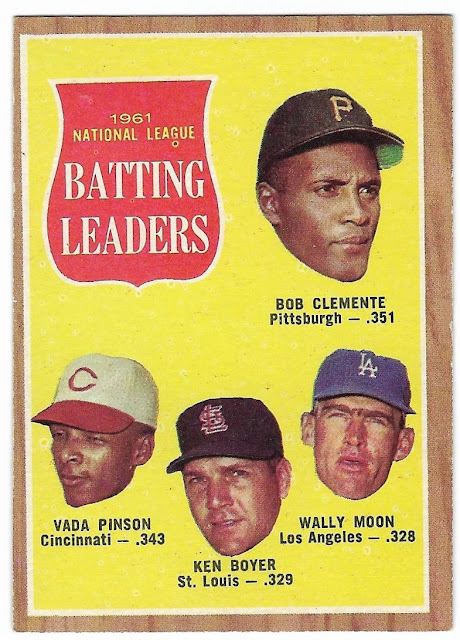 i don't know if moon had a nickname (maybe something to do with his eyebrow game?), but the name shenanigans here have to do with roberto clemente and topps' apparent refusal to use his real name.
1962 topps daryl spencer 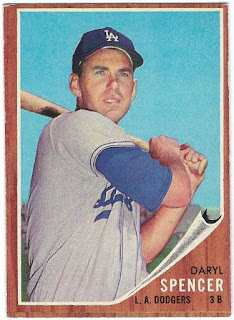 according to baseball reference, spencer's nickname was "dee" or "big dee". maybe before he joined the dodgers, but there was just one "big d" on the dodgers.
1967 topps john werhas 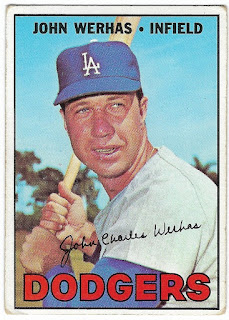 i guess werhas was known as "peaches", at least according to baseball reference.
1976 topps league leaders featuring andy messersmith 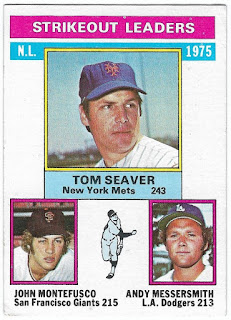 now this card wasn't an upgrade for me, but it does feature some folks with strong nicknames. there's tom terrific, but john the count of montefusco takes the prize. as for messersmith, he was called "bluto".
1971 fleer laughlin world series 1949 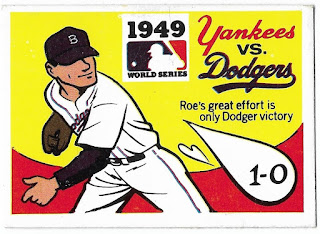 the cartoon on the card features elwin charles roe, better known as "preacher"
names are a big part of these next two cards 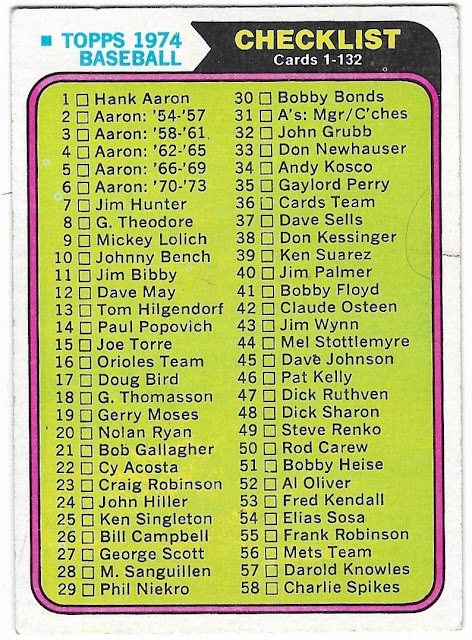 thorzul offered the set checklists up for grabs, and i was able to upgrade a couple from my 1974 set. we see right at the start of that checklist a couple of players with some great nickames - hammerin' hank and catfish hunter. 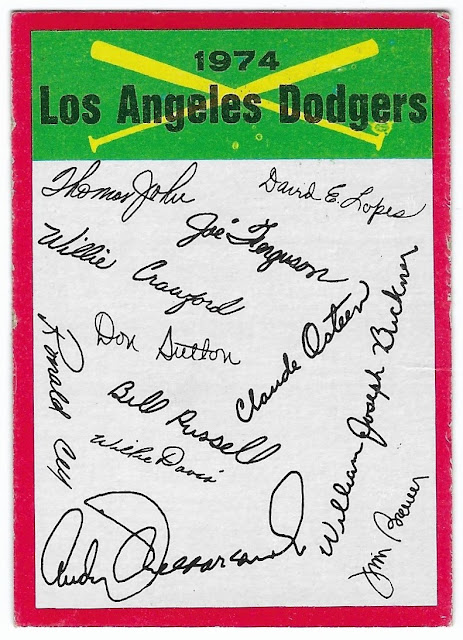 the dodger team checklist features some signatures taken from topps contracts, so you get formal names like "david e." lopes and "ronald" cey and "william joseph" buckner instead of dave and ron and bill, respectively. "thomas" john surgery just wouldn't sound the same.
finally, i also came away with this card 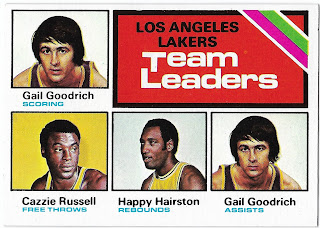 that's a 1975-76 topps lakers team leaders card that features gail goodrich, cazzie russell, and happy hairston. of the three, only hairston is sporting a nickname - his real name was harold.
while i was hoping for a koufax or four in my lot, i was not disappointed by the return. thanks thorzul!
Posted by gcrl at 7:55 PM