my favorite cards of the year - 2019 edition

i recently introduced my mini collection focusing on my favorite cards from each year that i've been a collector. the basic gist is that i wanted to create a space for the cards that i most appreciated having in my collection in the year that they were released. these were cards that i acquired in the year that they were issued, and that i considered to be my favorites at the time. i have disallowed (most) cards that are already in other mini collections in order to avoid having a mini collection consisting of more steve garvey, double plays, and dodger stadium cards.
i didn't actually declare a favorite card for 2019, although i came close. in the end, there were two cards that stood out for me when the dust had settled.
favorite non-dodger card: topps stadium club max kepler 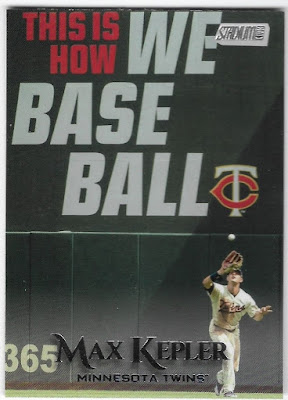 the twins have had some great marketing campaigns, commercials, and slogans over the last 20 years or so. seeing "this is how we baseball" on this max kepler card reminds me of a pocket schedule, and i was sure to add a copy as soon as i saw it on one of the blogs. it's a great example of topps using stadium club to showcase a photo that we don't usually get to see on a card.
favorite dodger card: topps update russell martin 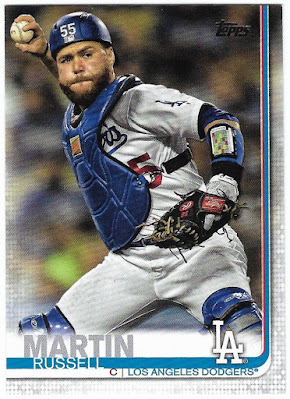 it's a well documented fact that russell martin has been featured on some fantastic cardboard throughout his career, and when i heard he had rejoined the dodgers prior to the 2019 season, i was really looking forward to seeing what topps had in store for him in series 2. i had to wait for update, but it was worth it. here we have a great looking card with a well-cropped photo that fits well with the design even if someone unfamiliar with the longtime catcher might think that his name was martin russell.
up next, 2002. stay tuned!
Posted by gcrl at 7:55 PM