i am not the most patient person. i have patience for others, but when it comes to collecting, i lack the virtue. even though i know that if i wait, the price will likely come down on some new release, i rarely wait. and, as a player collector, sometimes you have no choice but to strike quickly in case a certain card is not seen again for a long time.
same goes for my list of my most wanted cards - my 'nefarious 9' - over there on the sidebar if you are looking at this post via computer. maybe someday i'll add it to a menu accessible via phone. anyway, there have been times when i've been filling out a sportlots order and i'll add a card from that list. they are my most wanted cards, after all. however, i do try to add some cards to the list that others might have in their inventory to trade.
thankfully, there were a few of those cards still on the list when i received an envelope from p-town tom of waiting 'til next year fame.  he saw fit to send me a 2020 topps archives gavin lux card 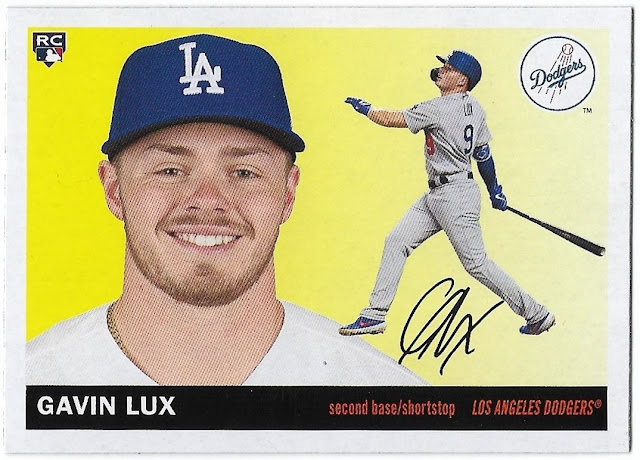 which completed my team set. lux is a wisconsin native so maybe there is no reason for an illini like tom to hold on to a card of a very hyped (too hyped?) young player.
other cards knocked off the list include a 2019 topps fire walker buehler 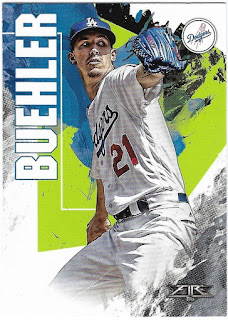 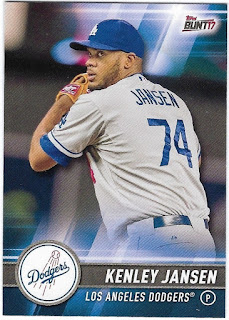 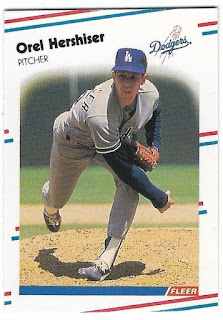 all of these cards completed team sets, and in the case of the buehler, resolves one of the worst conundrums of modern collecting - having a parallel of a card, but not the base version.
tom also took the time to send a 1995 score brian anderson 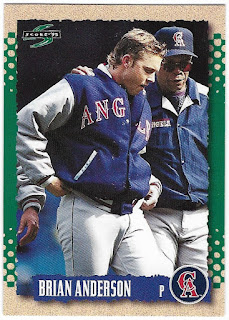 i had added this card to the "non-dodger bonus cards" section of the list, as it features one rodney cline carew - a nice addition to my lurker collection. anderson is a guy i sort of followed, as he was the third pick in the 1993 draft. i paid close attention to that draft because the dodgers were coming off of their worst year ever, and i knew they would have a high pick as a result. unfortunately, even though the 1992 dodgers had the worst record in baseball, it was the american league's turn to get the #1 pick, and so the mariners (who won one more game than the dodgers in 1992) got to pick first. the dodgers settled for second, and angels picked third and took anderson. the dodgers selected darren dreifort with their pick after the mariners took alex rodriguez. what a dumb rule that was. of course, there was hope and reason to believe that rodriguez would fall to the dodgers (as recounted by old friend eric stephens), but it was not meant to be.
by the way, all of the players shown on these cards are world champions (anderson won with the 2001 diamondbacks), except for the lone hall of famer, rod carew.
thanks tom!
i'll try to show more patience with the cards on the list - i already have one card that has been pledged by a fellow blogger, so i've taken that one off the list just in case.
Posted by gcrl at 7:55 PM