i don't remember if it was a seller at a card show, a fellow blogger, or someone else who said it, but many years ago, when the only mickey mantle cards i owned were from the 1970's and/or later, i was told "everyone should have a mantle from his playing days". since that time, i have purchased both of his cards in the 1965 topps set (and i even had a third version that was graded as psa 4 which i sold last summer), plus his final tribute from the 1969 topps release, but i didn't have one from the 1950's until a month or two ago.
i've said it  a few times over the last year - now is not the right time to be building a vintage set - but i am choosing to persevere. 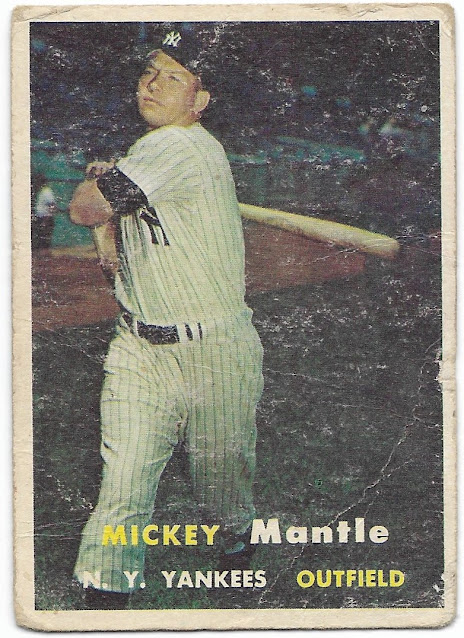 i added a 1957 topps mickey mantle card to the set build and my collection.
i've been watching auctions for this card for almost a year. initially i was certain that i wanted a psa graded version, but softened that stance around the new year. i started looking for a reasonably centered card with the right kind of love, and i think i found it here. there is surface wear and there are wrinkles; there is corner wear - but not deliberate or conspicuously even corner wear - and the slight paper loss exposes nothing but vintage card stock underneath.
here's the back, by the way: 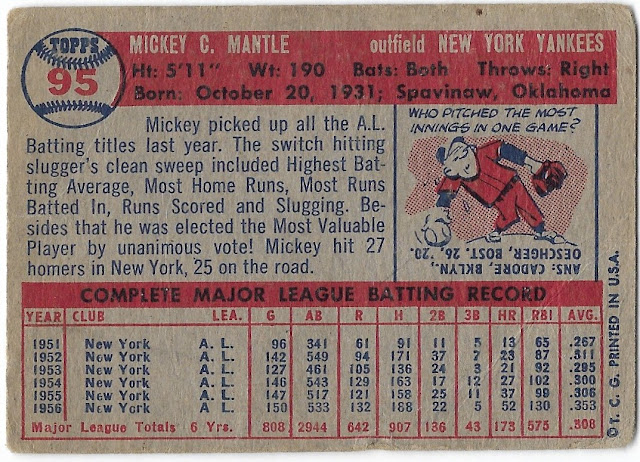 the card mentions the triple crown without saying "triple crown", and we are treated to his incredible 1956 stats on the last line. plus, there's a brooklyn dodger angle to the cartoon trivia question to boot. i am pretty happy to have this card, even though it means that i now turn my full attention to the rookie card of brooks robinson.
one thing that i noticed while i was looking at '57 mantles almost every day for a year, is that the topps artists airbrushed someone out of the background. you can see it on this cleaner copy of the card: 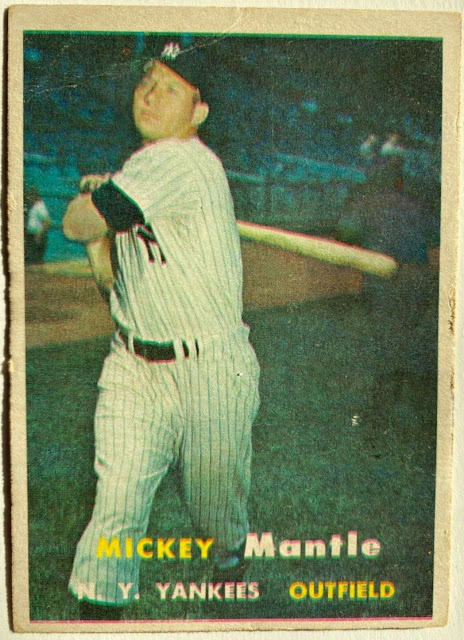 there behind the end of the bat is someone trying to get off of the field. i've tried to isolate it here:

maybe it's the ghost of the babe. whomever it is, it is interesting to me that they were "removed" from the image rather than just left alone.
i should mention that one of the other reasons that i went with the card that i did (here it is again) 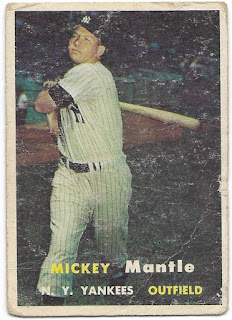 is that it was part of a personal mantle collection being sold by a longtime collector. as such, i added a second card from that collection to my purchase, this 1961 topps baseball thrills card: 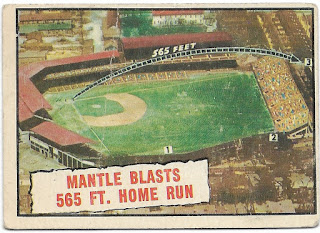 i don't know if it's true or not, but 565 was a number that i learned pretty early on in my baseball fandom. here's the story: 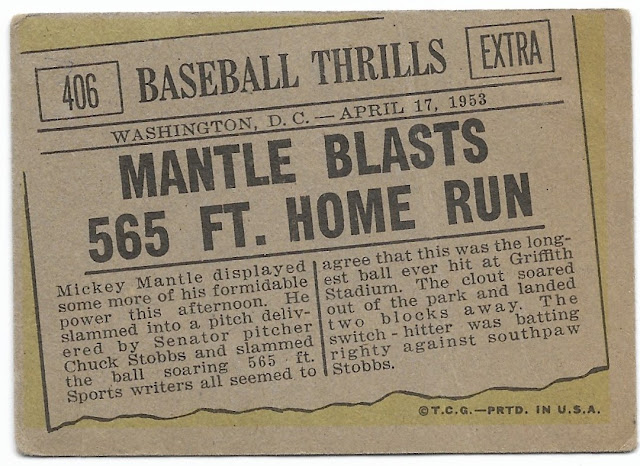 i have three or four of the baseball thrills cards from this set, and i've toyed with the idea of completing the subset for quite a while. maybe i will and maybe i won't, but it's nice to have this card either way.
when i was maybe 12 or 13, the idea of owning a 1972 topps steve garvey card seemed like a pipe dream. for one, cards were much more scarce back then before the internet opened up a wider marketplace. the other thing was the price and i didn't see how i would ever pony up $40 or whatever for the card. i remember telling my brother that "it's just a piece of cardboard". as my collecting continued and matured, certainly this mantle card became something like the 1972 topps garvey on a grander scale. except it's not just a piece of cardboard, it's a '57 mantle.
Posted by gcrl at 7:55 PM