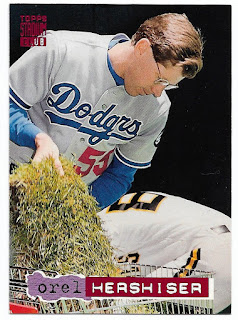 my first thought was that, for some reason, this card was the latest to be commanding ridiculous prices on the market.  however, when i read the article, the author noted that the card could be had for $0.99 on ebay. whew.
later in the day i was thinking that i wanted to post some hershiser cards that represent his run as my favorite dodger from "my favorite dodger through the years" mini-collection. i thought that the article and the story that he shared explaining the reason behind the appearance of sod in a shopping cart on a baseball card would make a nice lead-in for those cards.
i started typing the post in the early afternoon, and was surprised to find that in the 12+ years i've been blogging, i've apparently never scanned that card. so, i went to ebay to steal an image. of course, i then found out that there was a run on the card, and one copy had sold earlier in the day for $19.99.  i went downstairs and pulled a dupe from my sportlots inventory to scan. in the time that it took me to do that, the sportlots inventory for the card had gone from over 30 to just 21.
anyway, once steve sax left the dodgers after the 1988 world series, orel became my new favorite dodger, and remained so until early in the 1994 season when he was supplanted by raul mondesi.  here are the cards that represent his tenure in my collection.
1989: upper deck (world series) 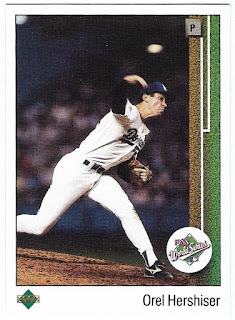 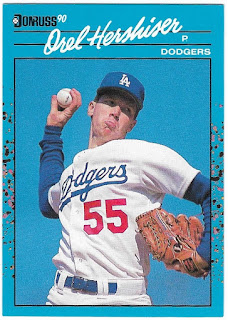 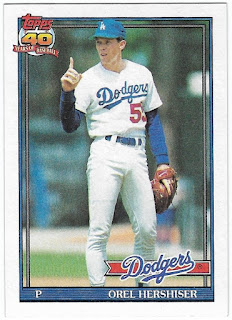 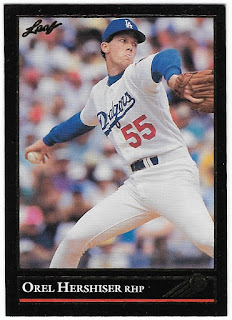 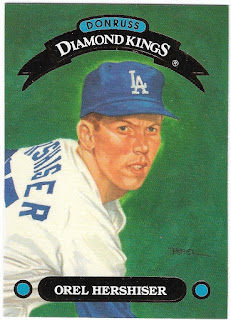 i suppose that had my fandom extended through the 1994 season, i might have added that stadium club card to this collection. it's too late now anyway, i sold my dupe for $6 plus shipping yesterday afternoon. these are crazy times.
Posted by gcrl at 7:55 PM