in lieu of packs this year, i've been just targeting singles from ebay and sportlots. i am less concerned as the years go on of completing dodger team sets, but i am not opposed to the endeavor. i find myself looking more for mini-collection cards, but will add a dodger card to the cart to fill out an order. usually, my first stop for such cards is clayton kershaw.
kershaw is the guy that i would keep collecting should he leave the dodgers after this season to pitch in texas. he is my current favorite dodger, but more on that later.  one of the first sportlots orders i created this spring had me adding both his base and variation cards from 2021 panini donruss 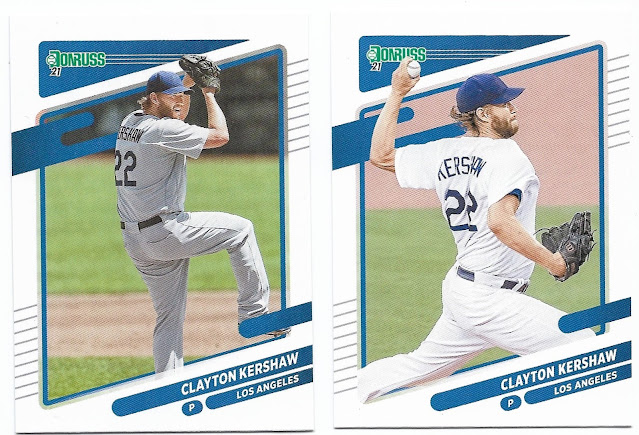 no, i don't know which one is which.  i also added his base and world series card from 2021 topps flagship 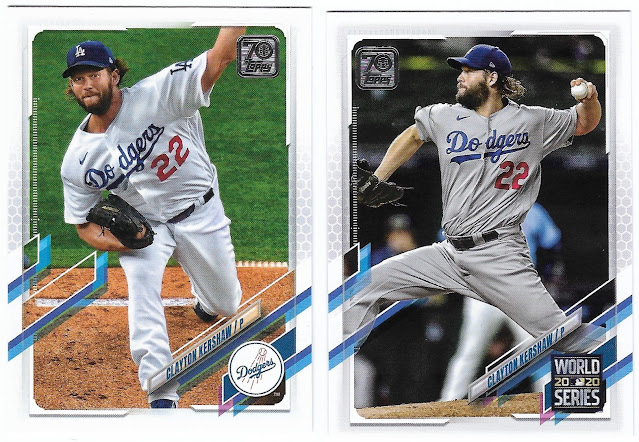 it's interesting to see these cards grouped together. you can really see that topps is essentially telling us to not buy donruss since we can get the same design from them, but with logos (and small font).
i found a seller with 2021 topps walgreen's yellow parallel cards for cheap and bought a couple, including kershaw's world series card. 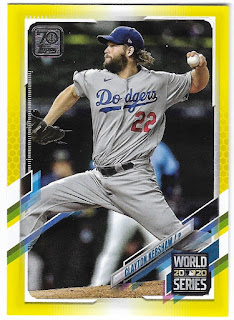 if i were an a's fan, i would be all over these for my team. i am, however, a dodger fan, but even then i am not too interested in seeking out the walmart royal blue parallels. go figure.
kershaw was included in topps' 70 years of topps insert set - he received 1953 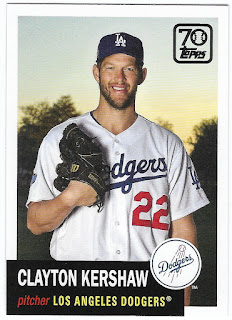 and he was also included in the 52 redux insert set 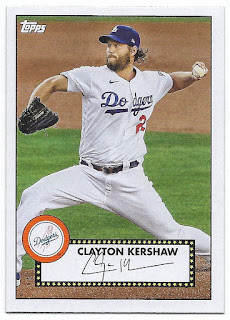 both cards look a little strange given that 1953 is a painted set, and there are no action shots on 1952 cards. still, i actively chose to add these cards to my collection because kershaw.
here's another insert i added to a sportlots order - a 2021 topps "stars in service" insert 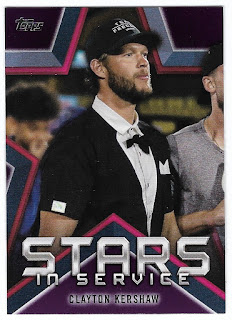 this one depicts kershaw in a pseudo tux. my first guess was that this was a photo from his charity ping pong tournament, and it turns out that it is. that's cody bellinger in the gray tshirt next to kershaw.
here's kershaw's card from the 2021 topps "through the years" insert set 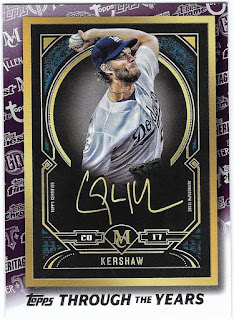 this set caused some confusion at first, but it features reprints of high end cards. i know that some people were fooled and likely spent a lot of money on cards like this when they first hit the market. even now, some jackwads are posting cards from this set (like derek jeter's which features a reprint of a 1/1 card) for big money. can you imagine spending $110 on a card like this and then realizing it is just a reprint? i can't imagine that topps was naive as to the confusion that these cards would cause.
moving on from flagship, i also picked up kershaw's 2021 topps heritage base card 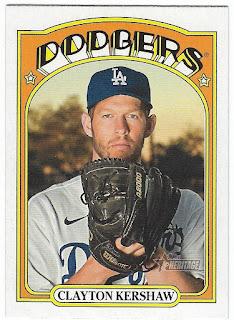 i like that the heritage backs are true to the complete stats on the back tradition. 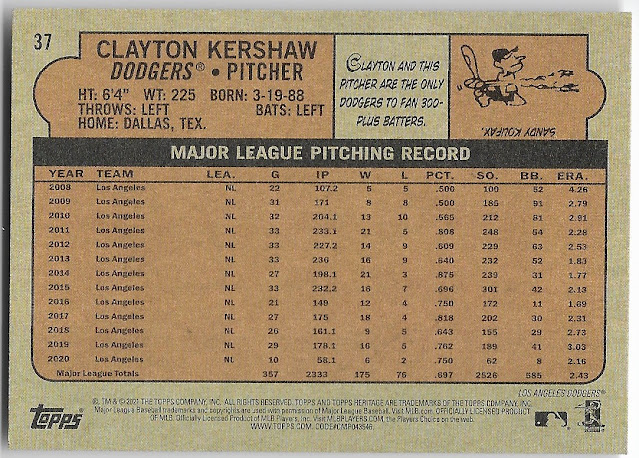 and with a sandy koufax reference in the cartoon. fitting.
the last of the 2021 kershaw cards i have added (so far) is this insert from topps opening day 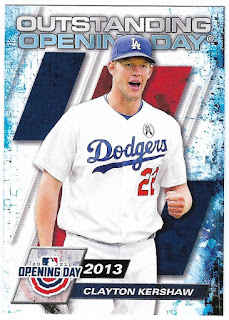 it celebrates his "outstanding opening day" in 2013, and even uses a photo from that game. back on the day it happened, i posted about how kershaw put on something close to a one-man show. here's the back of the card to explain: 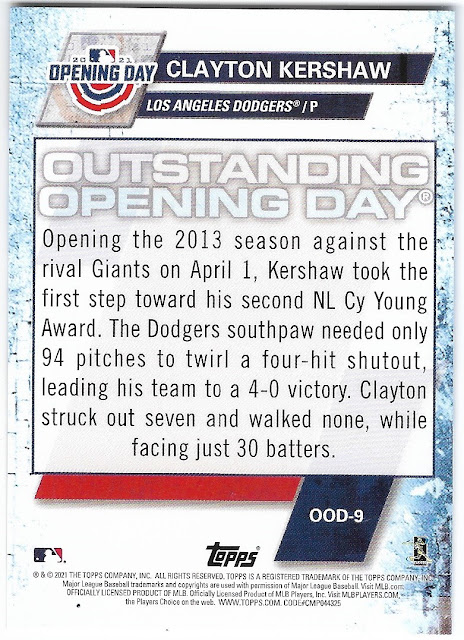 except what the back doesn't say is that kershaw broke a scoreless tie in the bottom of the eighth inning with his first career home run. it was awesome! that fact leads us in to the last part of this post where i share the cards that represent kershaw in "my favorite dodger of the year" mini-collection.  he took over the honors when matt kemp was traded to the padres prior to the 2015 season.
2015: topps "first home run" 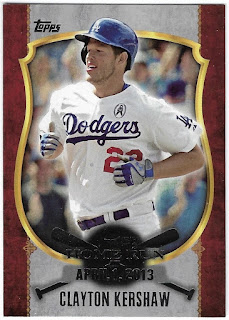 so if you put this card together with the opening day insert above, you get the whole story.
2016: topps stadium club 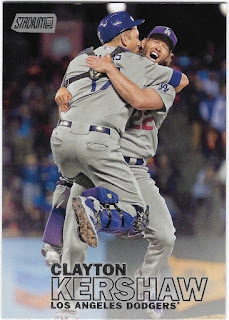 this is what clinching the division looks like. and in san francisco, no less.
2017: topps chrome refractor 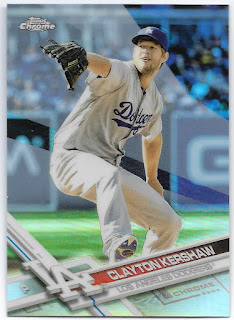 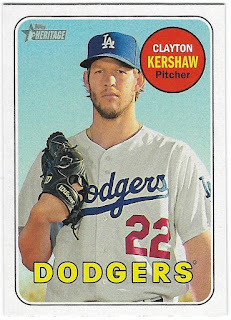 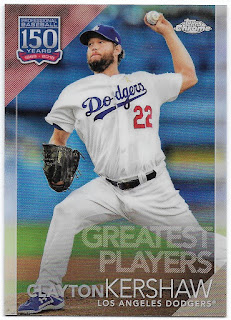 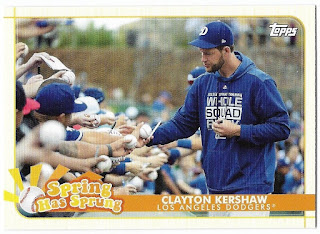 featuring a photo that we will likely not see the likes of again for a while.
2021 topps "52 redux"

kershaw had a bad start to the season (a bit unlucky, but certainly not sharp) but was his old vintage self on tuesday night against the a's. in that game, he passed bartolo colon and moved in to a tie with javier vazquez for 34th place on the all-time strikeout list. with another 20 k's he will tie jerry koosman for 33rd all-time and i'll be here for it.
Posted by gcrl at 7:55 PM