this sort of addition through subtraction is still addition

it has been a while since i've seen an update, but did you read shoebox legends and his "cardboard keepers" posts about flipping cards to fill out his 1000 keeper cards? it's a way for him to pare down his collection and rebuild it in a way that focuses on outstanding cardboard.  it is awesome to see what he has obtained.

i have been having the same sort of thoughts in a very serious fashion since the summer of 2018, although in no way was i thinking as ambitiously as shoebox legends.  essentially, the cards that i have flipped and sold over the last several years have just gone to fund more steve garvey cards to add to my collection.

then, in the spring of 2019, i decided to formalize my hall of famer collection - autos and relics - to include over 100 hall of fame (or hall of fame worthy) players that i had some connection to through my fandom or collecting experience. part of that decision was fueled by the fact that i had a few cards that i had pulled from packs that didn't necessarily fit in any of my various collections once i abandoned my large number of player collections in 2003.  i wanted a meaningful way to keep my bob feller autograph, my mickey mantle relic, babe ruth relic, and other similar cards in my collection.  ultimately, that decision led to acquiring more cards, not subtracting.  this paring down of my collection is taking some time, but i think i am on my way to having it be what i want it to be.

i have my dodger collection - 40 binders strong - plus over two dozen binders and even more boxes of various sets, my garvey collection which fills 5 binders, two binders of cards featuring dodger stadium, three featuring double play turns, plus a bunch of other binders with other mini collections and player collections.  i still have most of my hand collated (and a few purchased) sets from 1978 through 2010 or so, plus i have boxes of 49,000 cards or so that are on sportlots.  there are a few more monster boxes that contain cards that i haven't fully vetted yet - keep, trade, sell? - plus one that contains cards that i have listed on or prepped for ebay.
i've sold through sportlots and ebay for several years, and sometime back in 2020, i sold a card that i no longer "needed". it sold for a bit more than i expected, and almost double what i had paid for it just a few months prior.  with the proceeds, i treated myself to this card, a 1964 topps giant sandy koufax 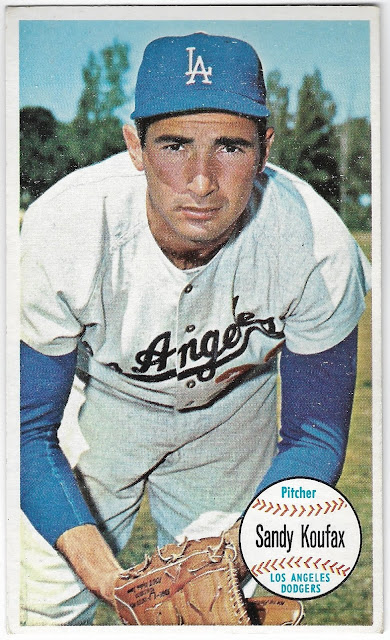 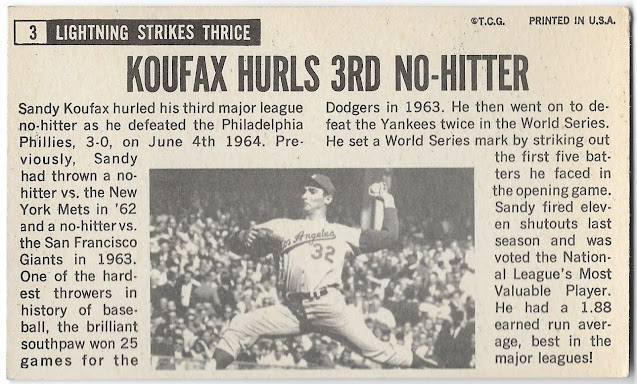 not only did this card complete my team set (i already had the frank howard and tommy davis cards), it also connected me back to the third grade. it was the spring of 1978, and i had made it known that i collected baseball cards. one of my classmates approached me one day and handed over a card from that 1964 set. it was al kaline's card, and i treasured it.  when kaline passed away in early 2020, i went looking for that card as i had decided it was time to pull together a collection of meaningful cards and expunge the rest of those old player collections (which included mr. tiger, of course).

oddly enough, i looked everywhere, but couldn't find the card. i am hoping it turns up, and if it does it will be headed to a permanent spot in my collection. like i said, this subtraction part is taking some time.