you might recall that i was happy to see a dusty baker card from topps in 2021 archives depicting him as the manager of the astros. manager cards have gone by the wayside in recent years, and so this was the first time he had been featured on cardboard since taking the reins of the astros prior to the 2020 season.
baker has a large number of manager cards overall, thanks to his leading teams during the renaissance of manager cards that took place beginning in 2001 topps flagship and ending with 2016 topps heritage (i think). baker's last base manager card was in 2013 topps heritage, but i know a few managers showed up in later releases.
those cards covered his managerial stints with the giants, cubs, and reds, and with his 2021 card showing him as an astro, it was only a card marking his time managing the nationals that had not yet found its way in to my collection. to my knowledge, there is only one such card, and it is the 2016 topps allen & ginter short printed "skippers" mini. i decided to rectify that situation 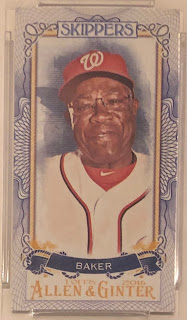 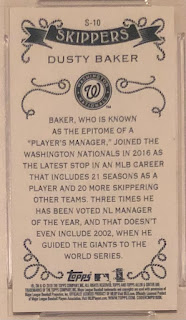 you can probably tell by those images that i have a graded version. 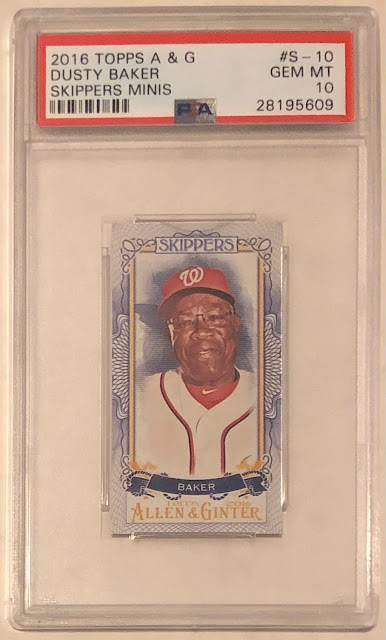 the seller noted that it was the only psa 10 in this card's population which doesn't surprise me - how many people would send this card in for grading? the answer is one.
i had been watching for one of these cards for a while and this was the only one that showed up. i don't know how many of these were printed, but i eventually decided not to wait any longer.
my guess is that the astros are the final stop in baker's managerial career, but that remains to be seen. he will pass 2,000 wins as a big league skipper early in the 2022 season, and given the astros' talent, he should also pass bruce bochy, leo durocher, and walter alston on the all-time leader board after reaching the 2k mark. that puts him in rarified air and would, in my mind, qualify him for the hall of fame even without a world series title. we will see!
Posted by gcrl at 7:55 PM