if i had a million dollar arm

i pulled this card from a pack of bowman back in 2009. 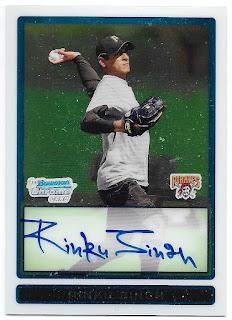 it features rinku singh, one of two indian athletes signed by the pirates. singh was the first of the two to appear in a professional game, although just by an inning. in doing so, he became the first indian player to appear in a professional baseball game. singh and the other player signed by pittsburgh, dinesh patel, were the subjects of the disney movie "million dollar arm".
neither one of them, it turns out, had a million dollar arm, but their appendage certainly opened the door for them to a world that most of us will never know. if i had a million dollar arm, by the way, i would still eat kraft dinner.
anyway, i suspected that the card was hard signed based on the blue signature, but there was no certification on the back: 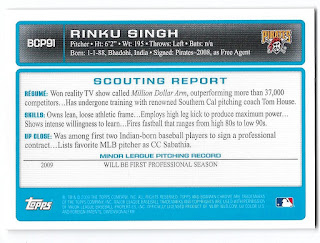 so i didn't know for sure. i forgot about this card until recently, and decided to look at comc to see if i could figure it out. i guess there are no cards for singh that feature a facsimile autograph, so it is indeed signed by him. it also lacks a jersey number inscription that was on the other cards in comc's inventory, although looking the other day i do see one that looks like mine on their site.
singh didn't advance too far in terms of baseball, but after he left the game around 2016, he remained a professional athlete. these days, he wrestles under the name veer mahaan on wwe's raw. i wonder if there will be a sequel to the movie to cover that career evolution.
Posted by gcrl at 7:55 PM