i figured by now we would know whether clayton kershaw was staying, going, or retiring. thanks to the lockout, we do not.
he will be 34 before the season begins, and he is 330 strikeouts shy of 3,000 for his career. based on recent years, that is more than two years worth of strikeouts. i would really like to see him reach that milestone, and i would like it even more if he did so with the dodgers.
i have added a few of his cards to my collection that were missing. some were throw-ins to sportlots orders, and a couple were targeted acquisitions.
here's a 2011 topps chrome refractor parallel 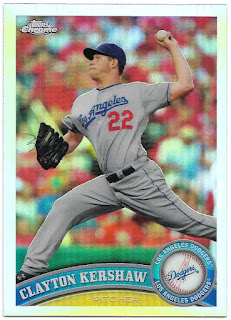 and this is a 2020 topps chrome sepia refractor parallel 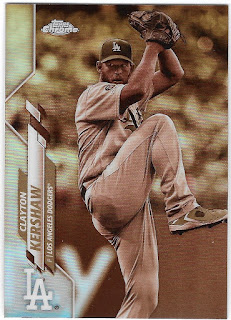 those are both legitimate topps chrome issued cards. this next one 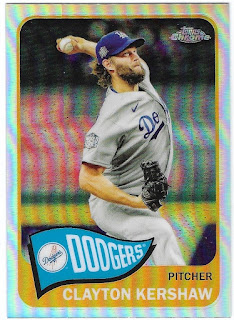 is actually from 2021 topps. it's a chrome version of the 1965 redux insert found in series 2 cards. i don't care for this sort of thing, to be honest. it's too bowman-y and it's confusing for folks who collect cards from multiple sets.
i had decided early on to track down one of these photo variation short prints from 2021 topps 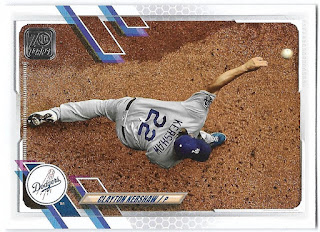 but had sort of forgotten about it. i think it was night owl that showed this card a few months ago that served as a reminder to me to go out and get it. i guess there are a few cards that use this perspective in this year's release, but i've only sought out kershaw's.
here's a 2021 topps stadium club red foil parallel 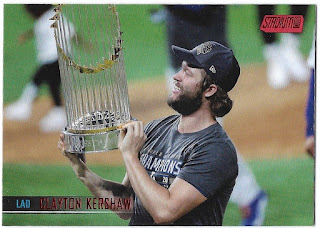 as usual, stadium club brings some unique photographs to the set. this photo has been modified to remove the surgical mask that was down under kershaw's chin. i get it, and i wish topps would have rotated the orientation of the card to portrait while they were messing around with the photo.
from the same release, here's a triumvirate insert 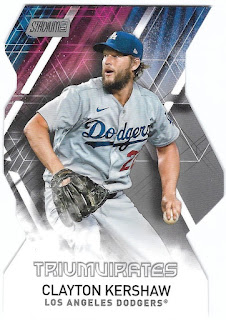 i have the red foil parallel of cody bellinger's triumvirates card, but i have no version of mookie betts' card. note to self...
the last card i will show is kershaw's 1992 redux insert from 2021 topps update 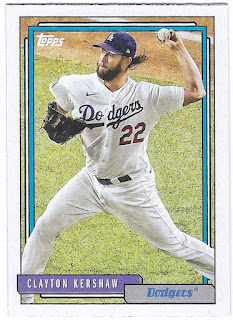 i was hugely disappointed when i learned that 1992 was being used in update. series 1 had 1952, series 2 had 1965, and so it would have only made sense for update to use the 1978 design. alas, topps doesn't care much for that design and jumped to '92.
one good thing about kershaw not signing prior to the lockout is that most cards issued in 2022 should show him as a dodger. if, by the time update rolls around (assuming topps - or is it fanatics now - has a more reasonable deadline than they did in 2021) he's in a different uniform, i'll still chase his cards as i intend to add him to the list of players for whom i collect their post-dodger cards. either way, i hope i can collect a 3,000th strikeout highlight card someday, regardless of the uniform he's wearing.
Posted by gcrl at 7:55 PM