i believe it was nick, since he and i both collect cards featuring the double play turn at second base (as does jeff from 2x3 heroes but he hasn't posted in a while), who showed off a 1996 leaf ozzie smith card some time ago. 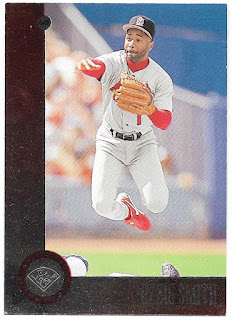 it's a nice photo on the card - smith is airborne in dodger stadium as a player slides in to breakup the play.
i checked and found that i did not own this card - not in my double play collection; not in my dodger stadium collection; nor in my lurker collection. so, i added it to my list of most wanted non-dodger cards. soon thereafter, i did some quick research on the sliding player after zooming in on the card image, and was even more excited to add the card to my collection. so, when i was filling out a sportlots order around the first of the year, i found a shopping cart seller who had three of these cards in their inventory and i made the purchase.
it is hard to see with a standard scan of the card due to the dark foil, but the dodger player sliding in is none other than eddie pye.  here is a lightened version of the card that sort of helps: 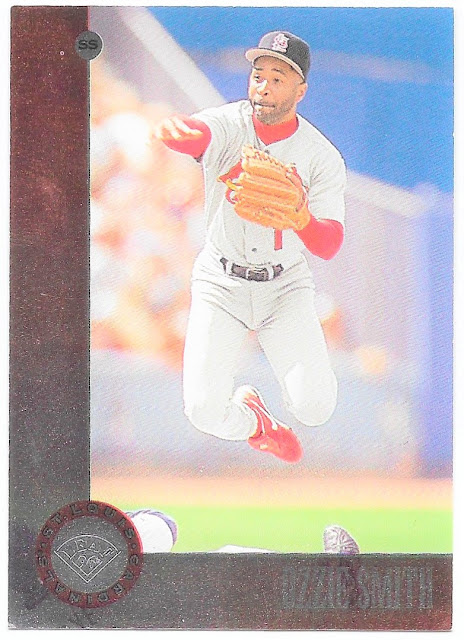 you can just see the "ye" on the back of the jersey. i know kanye wasn't playing for the dodgers back in the 90s, so a quick check of baseball reference confirmed it was eddie pye. further digging on that site shows that this play occurred on may 14, 1995. pye entered the game in the bottom of the 8th inning as a pinch runner for eric karros. the dodgers were down by a run and karros had drawn a leadoff walk. reggie williams tried to bunt pye over to second, but must have hit the ball right back to the pitcher who threw to second to get pye. as you can see, smith tried to complete the double play, but he was unsuccessful. williams eventually scored the tying run later in the inning but the dodgers still lost in 11.
pye's big league career consisted of 14 games - 7 in 1994 and 7 in 1995 - so it is fantastic to find him on a major league trading card featuring in game action. the only other big league card he has comes from the 1995 dodgers police set 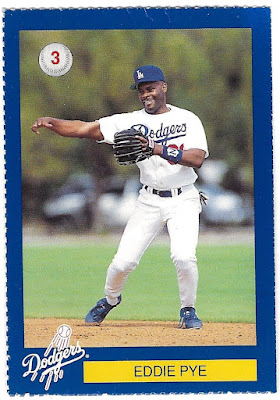 and that's too bad.
the leaf card above documents the only time pye was on base in 1995 (and one of only three times he was on base in his career), and so it is the last time he ran the bases as a big leaguer. not too bad to have your final putout made by a hall of famer and captured on cardboard.
Posted by gcrl at 7:55 PM