my favorite cards of the year - 2014 edition

i recently introduced my mini collection focusing on my favorite cards from each year that i've been a collector. the basic gist is that i wanted to create a space for the cards that i most appreciated having in my collection in the year that they were released. these were cards that i acquired in the year that they were issued, and that i considered to be my favorites at the time. i have disallowed (most) cards that are already in other mini collections in order to avoid having a mini collection consisting of more steve garvey, double plays, and dodger stadium cards.
i was excited for the 2014 season as the dodgers were scheduled to play in target field, and the all-star game was also planned for minneapolis. i was disappointed when the dodgers showed up that clayton kershaw was injured, but i still went to two of the three games. i wound up not going to any of the all-star activities, but still was able to add one of my favorite cards of the year to my collection. 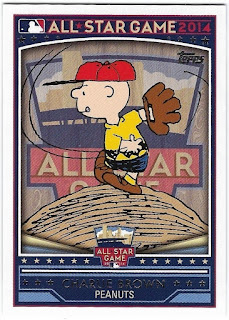 i was checking the fanfest lineup hoping to see steve garvey on the list, but he was not included. i missed out on him at the 1999 fanfest in boston (i was in beantown that weekend, but not for fanfest and only later found out he had been there). i decided not to go to fanfest or try to get tickets to the game or home run derby, although my son and a couple of friends went to the latter. i picked up this charlie brown card when it was included as a throw-in to something i purchased. i had no idea the card existed prior to that and i was really excited to have it. i was (and still am) a big fan of peanuts, and to have a charlie brown card in my collection is simply fantastic.
favorite dodger card: topps archives bill russell fan favorites autograph 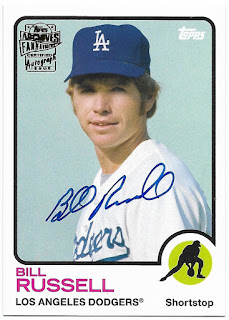 what a surprise it was to find this card as part of the archives autograph checklist! this was a year after davey lopes was featured, and i certainly didn't expect russell to be the next dodger infielder to be included. i wound up chasing the full rainbow but have whiffed on the purple and sapphire versions (i have the base (two copies), gold, and silver). topps would bring the other two infielders in to the fold with steve garvey autographs in 2016 and ron cey in 2017, and for that i am grateful.
up next, 1990. stay tuned!
Posted by gcrl at 7:55 PM